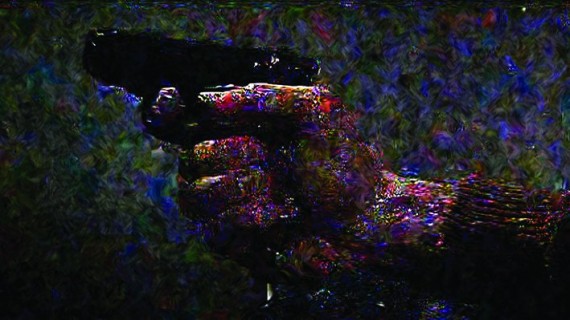 “It started as a blog in early 2011,” reflects artist Jack Brindley, who forms one half of the duo Open File. “Taking the format of a ‘curatorial conversation’, we would take turns to post artworks in response to what the other had posted.”

Fast forward two years and Brindley and his collaborator Tim Dixon are now working across ambitious live events, printed publications and an online archive with their forthcoming project, Long Live the New Flesh, at the ICA, London on 12 January.

“We’re interested in how artworks, performances, writing and information can be collected to fulfil a curatorial remit for the duration of an event,” explains Brindley. “And how they are subsequently dispersed as links and relationships are formed and broken via printed and online material.”

Long Live the New Flesh is the second in a series of three events taking place across England. The first, Hashfail, was held at Birmingham’s Grand Union in December, during which the Open File team worked alongside the web platform or-bits.com and presented part of the exhibition as a torrent file. “We were looking at how the constant redistribution of content online can corrupt its quality and bring about a new sort of physicality or texturing,” says Brindley.

For the second instalment, Open File will feature artists Sidsel Christensen, Dori Deng and Meta Drcar, Benedict Drew, Plastique Fantastique, John Gerrard, Nicolas Provost, and Head Gallery. All of whom, says Brindley, explore in their own distinct ways how we interact with and understand the virtual world.

Brindley also sees Open File as an attempt to explore, self-reflexively, what it means to curate in an increasingly digital age. “As art and other visual media is rapidly dispersed and consumed internationally across the Internet, we would like to ask what then becomes of the process of exhibition making and the physical staging of objects?”

Brindley describes the challenges of working across multiple platforms as an opportunity to explore an artist’s work through many different channels. “Through talking to artists, we realised that what is presented in the gallery is often just a thin skin of their expansive interests and research. Actually, a fundamental reason for starting the web archive was a deep dissatisfaction with the way a lot of art is documented and re-considered post exhibition. Press releases and websites often give the impression that you’ve ‘missed’ something, instead of giving you an entry point to it. The main challenge is to avoid this.”

The accompanying publication, explains Brindley, is a way to present ideas that run in parallel to the artists’ practices. “The content can be peripheral, preparatory or supplementary to what they’re working on for the event, or stand-alone. We like it to inform the audience and create context, but for it definitely not to become an explanation. It’s also something which lasts and remains long after the event is done – it continues to promote and disperse the artists’ work.”

The third event in the series, provisionally entitled Rickroll, will be hosted at Spike Island, Bristol in mid-April. For this, Open File will be looking at memes, cultural phenomena, and ecosystems developed online.