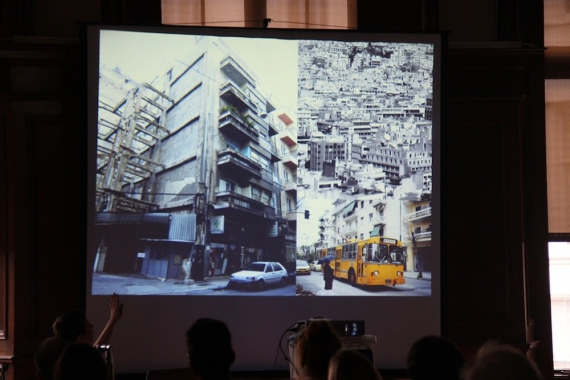 The Lumen Prize is a relatively new exhibition that celebrates and seeks out digital art on a global scale. It separates itself from other digital awards by having an international touring exhibition, creating a platform for an online People’s Choice Award and waiving application fees for artists in conflict zone countries. They sincerely believe in the digital arts and are taking steps to expand discussion within the field.

Last week, the Lumen Prize exhibition opened at Chelsea College of Art & Design’s Triangle Space in conjunction with a symposium on the 20 March. I visited the exhibition and the symposium to get a first-hand look at the collection and the concepts behind some of the artists work.

One of the most interesting elements of the symposium was the in-depth introduction to the history of digital art given by Douglas Dodds, senior curator in the Word and Image Department at the Victoria and Albert Museum and well known for his work on the Digital Pioneers exhibition in 2009.

This recap of digital art was essential for laying the groundwork for the symposium. Recognising that the field of digital art is older than we often realise, the presentation acknowledged the work of digital artists who have gone before. This was a brief but in-depth history of the medium that included artists’ slides from Frieder Nake, Georg Nees and A. Michael Noll.

This led nicely to an introduction to four of the artists included in the Lumen Prize: Nicolas Feldmeyer, Katerina Athanasopoulou, David Gould and Genetic Moo. This was an opportunity to see the artists’ working process. Feldmeyer tied in his practice with digital light and computer-generated 3D landscapes to what he referred to as “Land Art Sublime”. By referencing early Land Art of the 1960s and ‘70s he viewed his practice as one that uses “new tools for an old quest” – the quest being the relationship between manmade structures and the natural environment.

Athanasopoulou, meanwhile, opened the door to her free and intuitive practice based within digital animation. She shared with us the changes in narrative and environmental structure that came about during the making of Apodomy. It was the inspiration of empty city buildings and public transport in Athens that transformed her film. Showing slides of some of her first digital drafts, we saw how a sad and dark birdcage developed into the orange skeletal bus that in her film is driven through the city by the force of mechanical birds.

A brief Q&A session followed, which included questions from the audience that drove an intriguing critical debate. In reference to the context of digital work, there was a question about why it is often framed within the realm of photography.

In contrast, someone asked whether or not digital technology allows for a ‘new expression of the soul’. Another more technical question was directed towards Dodds and concerned the preservation of digital art that relies upon technology that could quickly become extinct. Aside from this technical question, there were no direct answers about the placement of digital art or its connection with the human creative process.

Perhaps this goes to show that we can’t concretely describe where new methods and developments in digital art will take us. Instead of naively defining those territories, the symposium ended on an optimistic note about the unknown worlds that will come about through new practices.