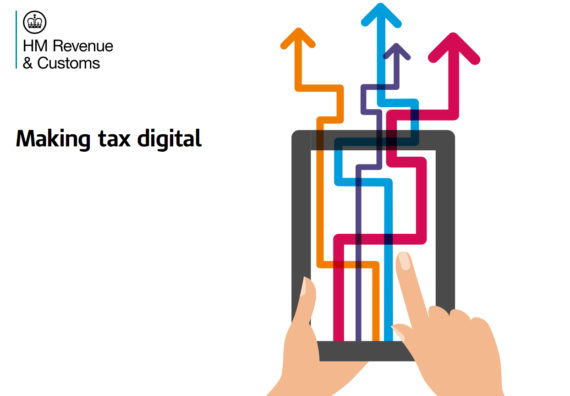 A few days ago I stumbled across a link to an article by Alan Lean about the government’s proposed reforms to tax administration. Lean manages the tax and welfare rights team at the actors’ union, Equity, and while it might not sound like the most scintillating of subjects, as a self-employed artist it felt like something I should read.

The article focused on ‘Making Tax Digital’, the proposed reforms the government claim will ‘transform tax administration so it is more effective, more efficient and easier for taxpayers’.

In short, the proposal is that by 2020, HM Revenue & Customs will have moved to a fully digital tax system where:

The new system sounds sensible, but what does it mean in practice for self-employed individuals?

It would seem that, rather than complete an annual tax return, they will instead be required to submit quarterly updates on income and expenditure using HMRC approved software, and have to use a new system of real-time record keeping alongside this to upload data as closely as possible to the transaction date.

In addition, there will be a new system of penalties based on a topping up system similar to points for driving offences, including penalties for late filing of updates.

Of course everyone knows it is a good idea to try and keep on top of accounts, but in my experience it is usually a task that sits at the bottom of a very long to-do list.

These proposals are going to add a huge amount of administrative time and pressure onto businesses to keep up with reporting, especially sole traders. Additional costs may also be incurred through purchasing the relevant software, updating hardware and increased accountancy fees, for those who can afford to use them in the first place.

The government is proposing to exempt businesses with turnovers of less than £10,000, and while it is true that a large percentage of artists sadly earn a profit of less than £10,000, it is quite likely that their turnover will often be more than this figure. It is also unclear how this will work for people with both PAYE earnings and self-employment.

Like most artists, my income comes from several sources and can vary drastically from month to month, and year to year. I work a lot to commission, which often involves receiving large lump sum payments up front, followed by a large amount of expenditure when in the throes of delivering projects.

It feels like this new system is not going to be set up for dealing with the erratic income streams of most artists. As a parent currently in receipt of child tax credit, I have first-hand, frustrating experiences of how the system doesn’t seem to be able to deal with or understand irregular income patterns.

Which brings me to one of my other concerns: how these changes will effect the tax credit or universal credit system.

I am already aware of a number of artists who in recent months have had their tax credit claim investigated by HMRC or Concentrix (a private US company which has since had its contract terminated by HMRC due to complaints about its conduct).

This involves having to send off huge amounts of paperwork to prove your income, working hours, childcare costs and even provide evidence of your business plan (does anyone have one of those?)

I know of at least one artist whose business was declared unviable, ie they were not earning the national minimum wage for the hours they claimed they worked, resulting in their tax credits being withdrawn.

These credits often provide a lifeline to people on low incomes; in my case it covers a proportion of my monthly childcare costs, without which I simply wouldn’t be able to afford to work.

From what I can see there is no mention in the Making Tax Digital proposals about how this constant monitoring of income could be used to calculate tax credit or universal credit payment, but it feels like a inevitable next step, which fills me with dread.

The Making Tax Digital consultation survey has now closed, but the language used throughout the survey questionnaire seems to suggest these changes are pretty much a foregone conclusion. It is in any self-employed person’s interest to keep a close eye on how these proposals develop, as they have huge implications, particularly for the cultural sector.