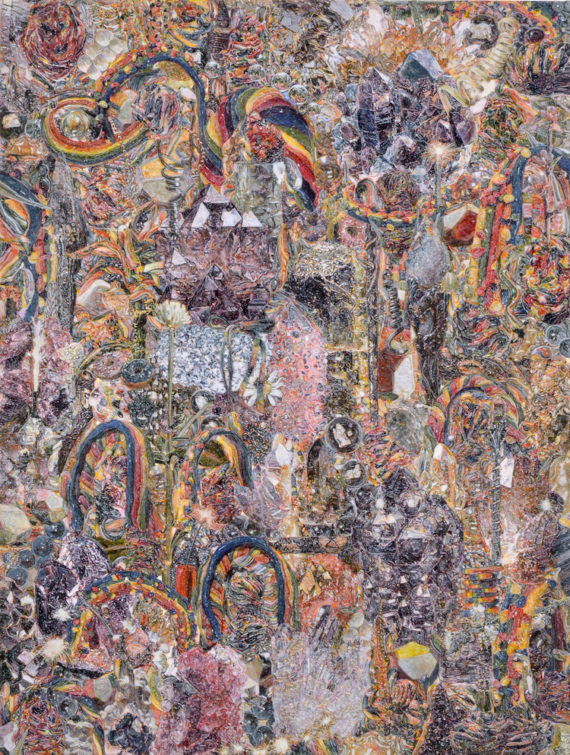 An intricately textured, multi-coloured painting by the Manchester-based artist Donal Moloney has been voted the winner of the John Moores Painting Prize 2016 Visitors’ Choice award. The artist receives a cheque for £2,016, provided by award sponsors Rathbones.

The painting, Cave Floor (2015), was voted for by thousands of visitors from the 54 paintings on show in this year’s exhibition at the Walker Gallery Art Walker, Liverpool. Around 10,000 votes in total were collected.

Many visitors also described what they liked about the work, with one stating: “It is alive! It moves, twisting and changing, tiny little images of almost fairytale nightmares that alter and reform as you watch. Fascinating.”

Commenting on winning the prize, Moloney said: “I am delighted… It is always eye-opening to get feedback on one’s work but an acknowledgement such as this award is very humbling.

“Being part of this John Moores exhibition has been terrific, seeing my work in the company of artists I have followed for years. I’m massively grateful to all the staff at the Walker Art Gallery and to the sponsors Rathbones.”

Sandra Penketh, director of art galleries at National Museum Liverpool, said: “This year the John Moores Visitors’ Choice has gone to a painting of extraordinary detail.

“Donal Moloney’s Cave Floor is a painting which can reveal something new over and over again. Among the myriad of shimmering colours and patterns are hidden images – flowers, rocks, rainbows, bubbles – which reward the view with their jewel-like qualities.

“We are very pleased to award Donal the 2016 Visitors’ Choice, on behalf of the John Moores Painting Prize audience, who so loved this ethereal and otherworldly painting.”

This year’s winner of the John Moores Painting Prize was the artist Michael Simpson, who received the £25,000 first prize for his painting, Squint (19). Four other shortlisted artists each received £2,500: Talar Aghbashian, Gabriella Boyd, Benjamin Jamie, and Selma Parlour.