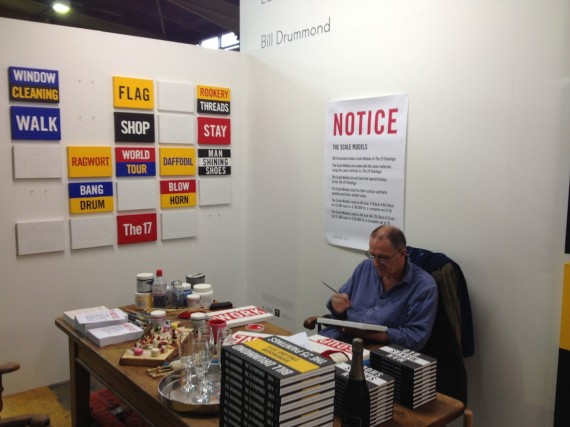 Bill Drummond is sitting at a desk painting A4-sized canvases bearing a series of simple messages: ‘FLAG’; ‘DAFFODIL’; ‘MAN SHINING SHOES’; ‘ROOKERY THREADS’. When I take a look, there’s 13 of them already neatly arranged on the wall and there’ll be 25 when he’s all done, scaled-down versions of the large canvases he created for a recent Eastside Projects exhibition.

This is the Birmingham gallery’s stand at the Manchester Contemporary art fair, which this year is in repurposed new space in what used to be the Granada Studios building. Drummond says the reason he’s diligently painting away is by accident rather than design: he couldn’t find the missing miniatures when he came to pack all the work for the fair. (Make of that what you will.)

It’s a performance of sorts, of course – all of Drummond’s art is, whether it’s a painting, a manifesto or just a notion. (“Are you making notes?” he asks with a smile during our chat. “Because I don’t do interviews.”

The 2014 edition of Manchester Contemporary – the fair’s sixth – is the biggest yet: “More artists and more art than ever before” say its curators Paulette Terry Brien and Laurence Lane. Which translates to 24 booths in total, with invited exhibitors drawn from across the UK.

One gallery here for the first time is Sheffield’s S1 Artspace, which is showing the work of S1 artists James Clarkson and Emily Musgrave, along with a selection of pieces from the S1 Artspace Artist Patrons scheme. You can buy donated works by, amongst others, Luke Fowler, Ryan Gander and Simon Bill. They’re a snip at half their current gallery price, with all profits going to this artist-led space.

It’s a strong, tightly-packed selection and a lively, enjoyable fair that’s well worth getting along to. Or as Drummond puts it on those (possibly still wet) paintings: ‘WALK’; ‘STAY’; ‘BANG DRUM’.