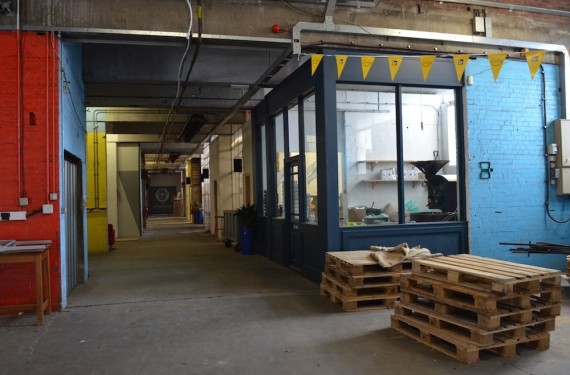 ArtWork Atelier, Salford, is an old building with a new purpose. It used to be a factory, and now it provides studio space for artists. Here, Elisa Artesero, John Lynch and Roger Bygott are meeting me to discuss Manifest, a new festival of contemporary visual art, opening across Manchester and Salford between 10-12 July.

ArtWork Atelier will feature as a venue, as will premier exhibition spaces such as HOME, John Rylands Library and the Manchester Craft and Design Centre. There’ll also be studio openings at Rogue, Islington Mill, Paper and PS Mirabel among others – Manifest is city-wide as well as ambitious.

It must, I ask, have been a challenge to pull all those venues and artists together?  “It was quite easy in a way,” replies Artesero. “We researched how other festivals worked. And for the venues, we were just choosing the places we tend to frequent, places that artists already show at or would like to show at. We made connections with those places and people. ”

“We’re all quite well plugged-in already,” adds Bygott. “We’re all artists, it’s an artist-led festival. And one of the primary motivations for doing the festival is to contribute to the artistic community and to feel like we’re strengthening that network.”

Manifest’s website is packed with intriguing information. I’ve already made a note to visit a live drawing performance by Naomi Kendrick at Paper on 11 July; an exhibition of abstract paintings at Malgras Naudet with the great title Dirty Slippery Epiphanies, featuring Lindsey Bull, Ian Hartshorne, Brian Mountford and James Quin; and a group show at Bankley Studios, Levenshulme, responding to a 1966 GCE art exam paper.

Wandering round the venues will no doubt reveal plenty of surprises, and much of the work has been produced especially for the festival. “I think it’s quite amazing,” says Bygott. “So many people I’ve spoken to, saying, oh yeah, I’m doing such and such a thing for Manifest.”

Asked exactly how many artists are participating, Bygott has to think for a moment before concluding: “We’re probably talking around three to four hundred.” Which is a considerable number, although of equal importance is the variety of practitioners, about which Bygott is particularly positive.

“We’re representing the current state of art in the North West,” he says. “I think the reason we’re doing Manifest in the first place, actually, is because we’re all relatively recent art students. And I was surprised by the range and standard of artwork in the North West. I think we just want to shout about it.”

There’s a lot to explore in the festival, and that will involve a certain amount of legwork. Thankfully, this has been strategically thought through. “With the open studios, some are open all weekend, but most of them we’ve clustered in area day-by-day,” explains Artesero. “So on the Friday night you’ve got Rogue, and then Saturday we’ve got more of a Salford leaning – ArtWork Atelier, Suite, PS Mirabel. And they’re all within walking distance of each other”.

There are some significant names involved, as Bygott explains: “Within Rogue you’ve got Susie MacMurray, Liz West, Naomi Kashiwagi – they’re either quite established or becoming established artists. At Artwork Atelier we’ve got Elisa [Artesero], she’s exhibited internationally and locally to quite a high standard. And Rafael Perez is here, he’s winning awards.”

At Regents Trading Estate, next to Islington Mill in Salford, Maurice Carlin is revisiting his shared art project as part of the festival. Mike Chavez-Dawson has even created a special Manifest Sorbet, which promises to “synthesise a taste portrait of the festival” – as well as keep visitors cool.

But with Manifest taking place at the same time as the Manchester International Festival, is this is an attempt to create some kind of ‘festival fringe’? “There has been a debate and a discussion about that,” Bygott says, “but we felt we didn’t want to go in that direction. We really like the international festival – we participate in it and benefit from it. We wanted to do something more complementary, and I think we’ve all been uncomfortable with the word ‘fringe’.

“If it has a relation to the international festival it’s one of enriching the whole cultural experience that’s already going on in the city. And obviously the benefit for us is there’s an influx of people coming in to Manchester, and we can give them something that’s local and grass roots.”

Manifest isn’t parochial, however. Talking about the location and the artists, Artesero adds: “It’s the place that we live and work, and we’re proud of that. We’re really keen on the people that are producing the work here.

“We’re involved in different communities, that’s how we see it, so if we can show that off and people can get a bit of the flavour, then that’s great. And I know we’re saying North West artists, but by that we’re not being provincial. We’re saying that these artists are producing really exciting work nationally, internationally – they just happen to be based here.”

Remarkably, Manifest has been brought together with hardly any funding; support from Arts Council England was just for research. “I think we all felt that actually it was a sort of a relief,” Bygott admits. “Not that we don’t want funding. But it’ll give us a chance to do our pilot festival, and we can come in with a bid next time for some funding from the Arts Council or wherever.”

“We just had to be careful to keep it manageable and focused,” Artesero says. “It makes it easier for people to read the programme and know what they’re getting. For now, for a pilot festival, we’re working with what we know – and how we are.”