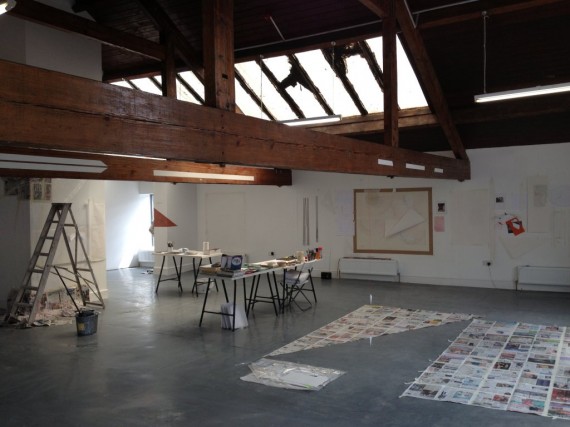 “It’s another thing in a small pond,” says Patrick Creedon. “From the beginning it was important that we’d get involved with other groups across the country.”

Creedon is talking about Mexico, the Leeds-based project space he runs with seven other artists. For its new exhibition, TO-MORROW or TO-DAY, Mexico has taken its collaborative ethos beyond the UK, presenting a dual show with Soscastoa in Ghent, Belgium.

Co-curated with Belgium-based Jasper de Pagie, the two exhibitions present new and existing works by nine artists – four from Ghent and five from Leeds. De Pagie approached the galleries after identifying a similar curatorial ethos at Soscastoa – currently housed in the city’s old library – and the Leeds space.

The exhibition’s theme, drawn from a poem of the same title by WH Auden, uses the poet’s play on language and verb tenses to draw together artists whose work deals with revealing, concealing and reinterpreting information.

“It’s extremely simple,” says Creedon of the exhibition. “It’s an exchange between artists, making a connection, the beginning of the conversation. It’s a mixture of work being made for the exhibition and work that already existed. It’s been curated from the ground up.”

While there are plenty of similarities between the spaces in Ghent and Leeds, there are also differences. Soscastoa predominantly exhibits emerging artists; Mexico opens its space to artists at varying stages of their career. This is demonstrated within the curatorial selection process for TO-MORROW or TO-DAY.

De Pagie selected the Leeds-based artists from a longlist drawn up by Mexico. Within this final shortlist are both Jenny West, who lectures on the Foundation at Leeds College of Art, and Jack Fisher, currently an undergraduate there.

West has made new work in the Mexico space, based on two architectural drawings that have been sent to Soscastoa. These existing works, on gesso-coated paper, are described by West as “very complex skeletal perspective drawings.” They’ll be simply pinned to the wall at the Ghent gallery. “Quite a lot of my work is about taking information from something through measurement and using the exact measurements to create a drawing,” West explains.

For the new work, West has spent the past month in the Mexico space. She has applied coloured gesso directly onto the walls and beams, referencing the space and the fragments of colour that she glimpses around it. “Having the time to make the work has been really important. I didn’t set out knowing what it would finally result in. That sense of unfinishedness is really important to me in the work.”

Since its inception in 2011, Mexico – which features in artist Kevin Hunt’s Artist-led Hot 100 – has aimed to link up with other artist-led initiatives across the UK and internationally. Its recent programme has included Birmingham’s The Lombard Method, and Trade in Nottingham.

Mexico has become part of a tightly interwoven peer-supportive informal network, allowing the curators to provide opportunities for Leeds-based artists to take part in exchange projects, including a recent residency exchange with Embassy, Edinburgh.

West, who has lived locally for the past 30 years and has lectured at Leeds College of Art for the last ten, sees projects such as Mexico as an exciting addition to Leeds’ artistic ecosystem. “I think,” she says, “that it [the Leeds’ scene] is growing in a really interesting, quite diverse way.”