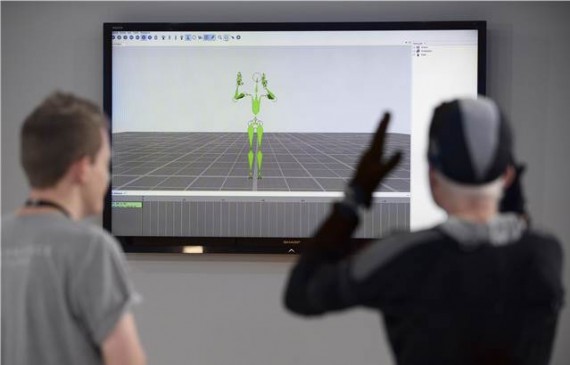 On entering Performance Capture, it is the sheer multiplicity of labouring bodies – as if the staff that typically perform front-of-house duties in contemporary art spaces had begun to increase uncontrollably – that provides its most striking aspect.

In the first space of the top floor gallery of Manchester Art Gallery, a large white stage is monitored by more than half a dozen technicians working at a raised bank of computers in one corner of the room and a separate set of monitors closer to the edge of the stage. Through a large opening in a partition wall at the back of the space, another group of technicians can be seen at work on a separate cluster of computers.

These workers are overseeing the postproduction process of Ed Atkins’ Manchester International Festival (MIF) commissioned project, and one has to cross through their production suite, technically referred to as the ‘render farm’, to access the exhibition’s third and final space, containing the finished product.

‘Finished’ is a misnomer here, since the video will continue to change throughout the exhibition’s duration. Back at the stage, Atkins and several assistants are coaching and attending to a lone performer, who reads a surrealistic script from an autocue, while the assembled technology captures and records their facial and bodily gestures. These gestures will be processed through the ‘render farm’, which will add shadow, skin and hair to the wireframe image visible on numerous monitors installed in the first room. Atkins will be present to oversee this production process throughout the project, accompanied by a fleet of assistants drawn from the personnel of the Manchester-based 3D animation company Studio Distract.

The video will go on to constitute a palimpsest of all these motion-capture recordings, some of which will be of MIF performers including Björk and Damon Albarn, boiled down into a single recital. Over the coming weeks Studio Distract’s technicians will feed this burgeoning complexity by introducing additional variables, for instance by making the avatar appear to grow older.

In its digital textures and its focus on a single, notionally male, face, this video resonates with many that Atkins has produced to date, including the works which were exhibited in his solo exhibition at London’s Serpentine Gallery last summer. What is distinct here is the extent to which the piece relies on the contribution of a host of other individuals; where Atkins has typically concentrated on the private matter of his own face and body, here he goes public.

The video itself is however of marginal interest in the context of the exhibition as a whole. Atkins is keen to emphasise the extent to which this show dovetails with MIF’s decade-long focus on durational trajectories in art making and curating. For Atkins, these trajectories are “still super-interesting, particularly as they relate to productivity”. Indeed, the exhibition’s most fruitful tensions come about as a result of the artist’s decision to foreground a form of professional labour that is distinct from his own.

Studio Distract’s owner Steve Hanton is present to oversee affairs, and his opening-day tour of the exhibition is instructive. Hanton emphasises the sophistication of the assembled technology, noting that the server set-up has been loaned by CISCO Systems because it’s “something that nobody can afford”, and emphasising the speed of the postproduction process: from motion-capture to video screen in three or four hours. With Studio Distract having been selected out of multiple candidates on the basis that many other companies simply did not have the resources to embark on such a project, Hanton is keen that the artist’s ‘vision’ is successfully conveyed, but he also emphasises his desire for viewers to take note of the skill of his colleagues: “You’re supposed to see the pipeline, not people sweating”.

Atkins is not exactly longing for sweat, but neither does he fully share Hanton’s desire for the process to go off without a hitch. “I don’t want it to run totally smoothly,” he notes, “because then the answers that the audience are likely to come up with are pragmatic”.

Although he is aware that audiences will be drawn to discuss the technology on show, Atkins remarks that he himself has often used digital technology “as a way to afford myself space to do something else and think differently”. Numerous wilfully obscure interventions in the exhibition space thus tilt the show away from a transparent presentation of the practicalities facing Hanton and his company.

Alongside such objects as a rack of grey t-shirts, jogging bottoms and white plimsolls provided for the benefit of performers – objects that for Atkins fall under “the utterly practical aesthetic of things that have to look the way they look just because” – one finds such strange and troubling items as a bucket filled with wilting purple flowers set alongside two empty Diet Coke cans and an apple core, under a sign reading ‘Read more about the symptoms of dementia’. A number of Atkins’ drawings also occupy the space, their queasy lines and grotesque bodily subject matter serving to imaginatively rope together the present meaning of ‘render’ with its origins in butchery. The artist is keen to note that “If I say ‘this is the render farm’, I want it to sound like we’re boiling bones. I want people to have that image.”

Such intentions align with a broader critical project that underpins a great deal of Atkins’ work to date, concerning the materiality of the digital. “One of the things that’s strikingly difficult and interesting about digital media and the general rhetoric of how one approaches computers is that the language used is often one of deferral,” Atkins remarks. “So, ‘the cloud’ is a kind of convenience and sounds great  but it’s also very much a political move, it’s a deferral to maintain suspension of disbelief, it’s a mystification of the bad bits of a political and industrial process.”

In an excerpt from an article for Texte zur Kunst reproduced at the exhibition’s entrance, Atkins writes that “Every ‘cloud’ has a rusting, heaving, scorched lining; every black mirror of an iPhone carefully omits the indexing of a thousand traumatized lives over there, out of sight, in its occult, vanished material history.”

While it stops short of directly reflecting on some of the grisliest flashpoints in the development of digital technologies – the mining of coltan in the Democratic Republic of Congo, for instance – Performance Capture clearly represents an attempt to re-embody digital image production by exposing some aspect of it to the public. In offering the motion-capture production process centre stage, Atkins accepts the possibility that his audience’s reaction will be one of awe and curiosity at Studio Distract’s capabilities. The artist’s challenge is then to create the kind of space in which those affects can be captured and bent into something more reflexive, more critical, or more uncanny.

Ed Atkins will be in Conversation with project co-curator Hans Ulrich Obrist, 11 July, 2pm at the gallery – event is now sold out, but will be live-streamed via performancecapture.net 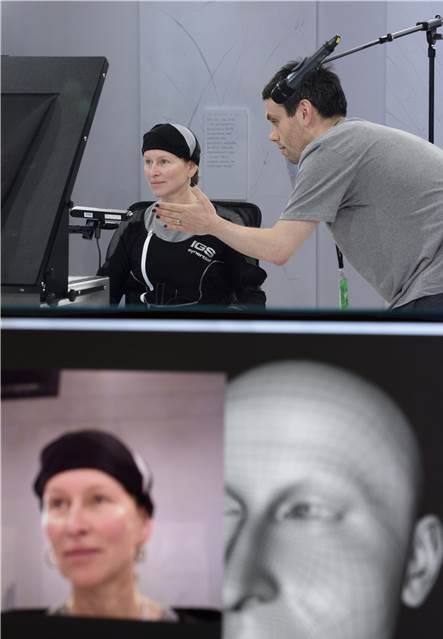 Luke Healey is a PhD candidate in Art History and Visual Studies at the University of Manchester.