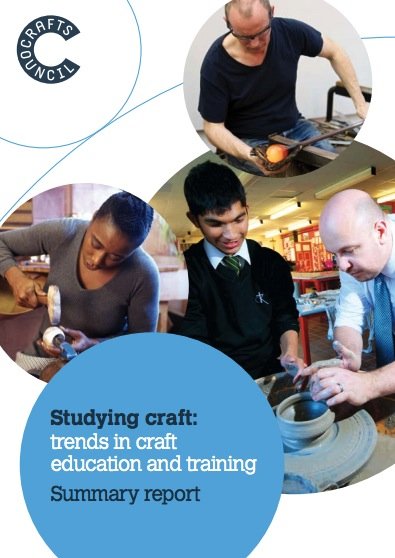 A new report commissioned by the Crafts Council explores the impact that government policies are having in provision, participation and uptake in contemporary craft education. The report, which was launched last week during a conference at Goldsmith’s Centre, London, aims to shape strategies for the future.

Geoffrey Crossick, Chair of the Crafts Council, emphasised at the launch the importance of being at ease with materials, of being tactile and encouraging cognitive development through acquiring haptic skills. He appropriately summarised the findings in the report as: “the calm before the storm: there is a decline in provision and participation at lower levels of education and that means that there will be an inevitable decline in the flow into higher education.”

The report’s key findings paint a sombre picture for the future of craft in education:

• Increases in provision across Key Stages 4, 5 and further education are driven by the unitisation of qualifications happening since 2010. Over this time period, the design and technology GCSE was also restructured, favouring discipline specialisation from an early age, when experiencing a broader range of disciplines may be more beneficial.

• In spite of the increase in craft units available to study at Key Stage 4, participation is decreasing.

• Although general further education provision in craft has increased at three times the rate of all other general provision, participation has declined by 58% over the period of the study.

• The only education stage that has seen a decrease in the number of courses available is higher education. The overall decline across the five years is 39%.

• Gender balance continues to be an issue across all education stages in craft. Gender stereotyping in discipline choice appears to be embedded from the very outset of engagement in craft.

There are some positive findings in the report that could provide an alternative to current changes in provision and participation. Among them, the fact that BME (black and minority ethnic) participation at undergraduate level is increasing at above average rates suggests a widening of access and greater diversity in craft practice.

The introduction of new education establishments – Academies, Studio Schools and University Technical Colleges (UTCs) – could have a positive effect and provide alternative routes for craft. However, there was consensus and unified concern amongst the conference attendees and the report: interest and participation in craft declines at Key Stage 4 (GCSE level). Whereas children are encouraged to take part in craft, once they reach GCSE stage there is a tendency to focus on other subjects.

This derives from a lack of understanding of the benefits of learning a craft and it is highly likely that, as the report states, “as long as arts subjects remain outside the Ebacc performance measure, and therefore are not prioritised by parents or the school inspection framework, participation will continue to decrease. The risk is that the education system is moving to a position where young people have little exposure to in-depth arts and are reliant on parental knowledge to access this.”

The report follows on to explain that “the choice of education pathways appears to be influenced by pragmatic decisions about which subjects are most likely to get the student a job”, and highlights the trend to reduce education to skills in order to make people employable.

Attending this event made me question my own preconceptions about craft. While certainly not surprised by postgraduate provision in craft disciplines, coming from an arts background I had a moment of self-recognition and realised the contempt with which craft at higher education is regarded. A PhD in Basket Weaving or a Masters in Embroidery anyone?

It may be that this is where most of the issues arise. While the point was made about the arts being academic subjects, it is perhaps the language employed to talk about the arts and craft that is most damaging. Like a subaltern of the predominant discourse, the creative industries haven’t found the appropriate language that will allow them to liberate themselves – from market forces, from performance-driven aims – and make clear to the rest of the world why they’re so relevant.

Although it was argued that we should talk about the monetary and economic value of craft, the arts have unsuccessfully tried this already. If we are to question the status quo of the current education system, the arts and crafts must begin to find their own language.

Download a pdf of the Crafts Council report here