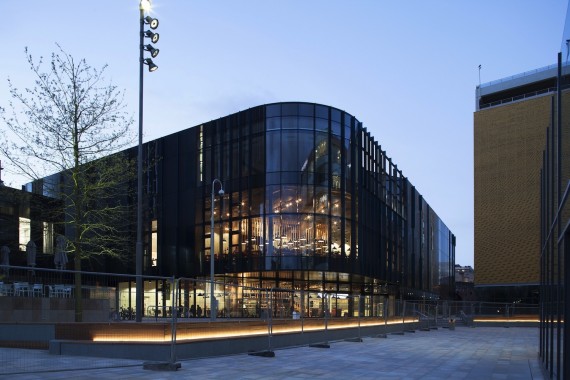 It is a good time for anyone interested in the arts to be living in Manchester. Now underway and continuing all this weekend is HOMEwarming: the official opening of the long-awaited, £25m successor to Cornerhouse and the Library Theatre.

Designed by Mecanoo, the Dutch architects responsible for Library of Birmingham, HOME contains five cinemas, two theatres and a gallery of contemporary art. And while its cinemas, main theatre and restaurant began admitting paying customers earlier in the month, it’s only now that visitors are getting the chance to view HOME’s first art show, and get a sense of how the building works as a totality.

For locals in the know, HOME may already be familiar territory, but not for most Mancunians. Concealed behind the busy railway viaduct on Whitworth Street West, opposite the former site of the Haçienda nightclub, HOME is part of the city’s new First Street regeneration zone. Some might see it as slightly off the beaten track, and given Manchester City Council’s aim to extend the city centre ‘beyond the Haçienda’, that is hardly surprising. It will take time, and possibly some re-routing of the buses, to establish the area on the majority’s radar.

You can see the whole development better from around the corner on Albion Street/Medlock Street. Privately developed by ASK, it includes a hotel, offices, a multi-storey car park, and various retail outlets, gathered around what, on a good day, will be something of sun-trap, called Tony Wilson Place.

Within this arrangement, HOME’s smooth, black, triangular shape occupies pride of place. The building, though, has not impressed one or two London-based critics. Oliver Wainwright in the Guardian (May 15) thought the design was ‘dour’, and the Daily Telegraph’s Rupert Christiansen (May 14) commented more widely and patronisingly on the number of new, or improved arts venues in Manchester amounting to ‘uncalled-for palaces of the arts’ in a city that he thought ought to be more interested in football.

But Dave Moutrey, HOME’s director and chief executive, is unruffled. “He’s in a minority,” he says about Christiansen. “We’ve had massive ground support, but there’s a small group who are missing the point.” Addressing Christiansen’s impression that HOME is a brand new invention, Dave adds: “We are a reconceptualization of two organisations, both with long histories. My experience is that colleagues in the arts in London are very supportive of what’s going on in Manchester. But if London gets the wrong end of the stick, who cares?”

But it’s the way HOME’s curating differs from other venues, in its commitment to cross-artform commissioning, that perhaps distinguishes best what HOME is attempting to do from now on. Moutrey describes this as “commissioning and presenting more work that’s hard to pigeonhole. Is it theatre? Is it art?” Referring to HOME’s first theatrical production, he continues: “If you look at The Funfair it’s very visual and stylised. As well as a theatre piece it’s a work of visual art.”

At 500m2, HOME’s new exhibition space exceeds what Cornerhouse could offer by 25% and is situated on the ground floor, where audiences will be far more aware of its existence. Entering the gallery with Douglas Coupland’s Slogans for the 21st Century dominating one wall and Ragnar Kjartansson’s eleven meter pink neon sign SCANDINAVIAN PAIN running along another, one gets an immediate grasp of the additional spaciousness.

“We’re building on the great stuff Cornerhouse and the Library Theatre did,” says Perks. “But what’s really important is that this is a contemporary international independent space. Not only do we have theatre, art house cinema and visual art, it’s the proximity of these to each other that is unique.”

This kind of curatorial approach was exactly what was being talked about back in 2008 when reports like Crossing Boundaries were being published, examining not only the role of Cornerhouse but also Liverpool’s FACT, Sheffield’s Showroom, and Gateshead’s Tyneside Cinema, among others, in spearheading regeneration by acting as ‘cultural laboratories’ in their localities. The difference with HOME is it now includes theatre, it’s bigger and better, and in a different location.

Unlike Cornerhouse, HOME is removed from the student-dominated zone of Oxford Street but close to Castlefield Gallery, with its strong role in promoting the city’s home-grown crop of emerging contemporary artists. This nearness perhaps will create one among several new creative ‘conversations’, as current terminology has it, between different galleries, artists and curators.

“I’m very conscious of the ecology of the city and the north-west region,” says Perks, “and how everything complements everything else. But we can also push each other in the work that we do and the artists we work with. Castlefield is smaller and it doesn’t have cross-artform commissioning, but it does amazing stuff – it’s a really nicely curated space and it has an important talent-development strand.

“With visual art, I think the more that goes on, the more people want to see it. There’s a real appetite for this kind of work; we can really support and help each other. You need an ecology for local artists where there’s a variety of spaces, to encounter new work and have a dialogue with international artists.”

With the enlarged and improved Whitworth Art Gallery attracting big audiences for its launchpad of contemporary art shows, plus continuing commitment to contemporary work at Manchester Art Gallery, as well as in independent spaces like Castlefield, International 3 and Bureau, there’s more space than ever, not just for new art around the city but also for new initiatives and experimentation. Already Perks is talking about a ten-day festival of performance art at HOME next year. It would be great to see more debate, too, engaging audiences, critics and thinkers.

About which Dave Moutrey is optimistic, of course. “It would be difficult to do it unless there was such a strength of visual art already in the city. The audience has widened immensely.”

HOME is a significant development, and it signals the possibility of even more to come. Factory Manchester, a permanent headquarters for the Manchester International Festival, is planned to open in the old Granada TV studios site in 2019. With much depending on conversations between the city council and the new Conservative government on a possible ‘Northern Powerhouse’, a north-west super-city and so-called ‘Devo Manc’, Manchester is positioning itself as central to UK culture outside London. And in wildly uncertain times, that’s exciting.

The Heart is Deceitful Above All Things continues until 26 July 2015. homemcr.org