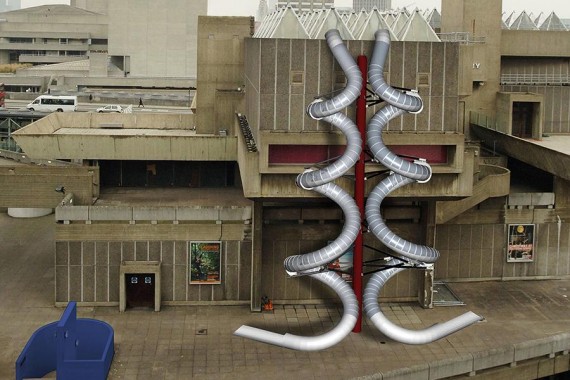 Carsten Höller, Hayward Gallery, London
This interactive exhibition, Decision, is Höller’s largest survey show in the UK to date. As you might expect from the man who in 2006 filled Tate Modern’s turbine hall with an installation that wouldn’t have been out of place at a fairground, it’s a whole lot of fun. There’s lots to see, including two new slides snaking down the outside of the building. The perfect way to kickstart the summer.
Until 6 September 2015. www.carstenholler.southbankcentre.co.uk

Beatriz Olabarrieta, Northern Gallery for Contemporary Art, Sunderland
Spanish artist Beatriz Olabarrieta’s theatrical installations turn the NGCA’s gallery space into a stage, with her sculptures acting as platforms for invited guests to perform. These events will also act as a catalyst for newly commissioned texts that will be produced over the duration of the show.
Until 11 July 2015. www.ngca.co.uk

Pia Camil, Pablo Helguera and Pedro Reyes, Mima, Middlesbrough
This group exhibition presents work by three Mexican artists. It’s about as varied as they come, ranging from beautifully hand-dyed and stitched curtains, to physical workouts. The aim is to engage visitors in a total workout of mind and body – it does not disappoint.
Until 6 August 2015. www.visitmima.com

Bridget Riley, De La Warr Pavilion, Bexhill-on-Sea
This survey of Bridget Riley’s paintings explores 50 years of her work. Featuring over 30 pieces, it charts one of the most unique explorations of form and colour in the history of abstract art.
Until 6 September 2015. www.dlwp.com