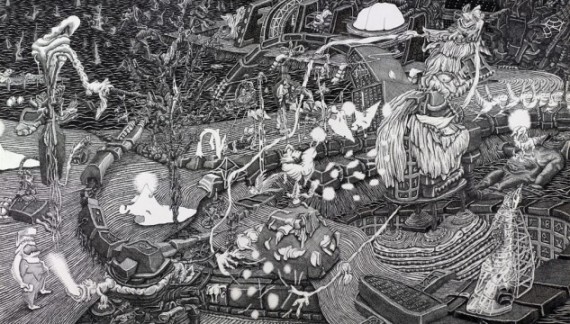 Inside Out, Castlefield Gallery, Manchester
This group show has been curated by David Maclagan – artist, academic and author of Outsider Art: From the Margins to the Marketplace. The work, which sways between figurative and abstract, features drawing and painting that has been created by artists who are linked by an intense and compulsive approach to mark making. Highlights include Darren Brian Adcock‘s automative drawing that also features hidden UV ink and audio electronics.
Until 24 April 2016. www.castlefieldgallery.co.uk 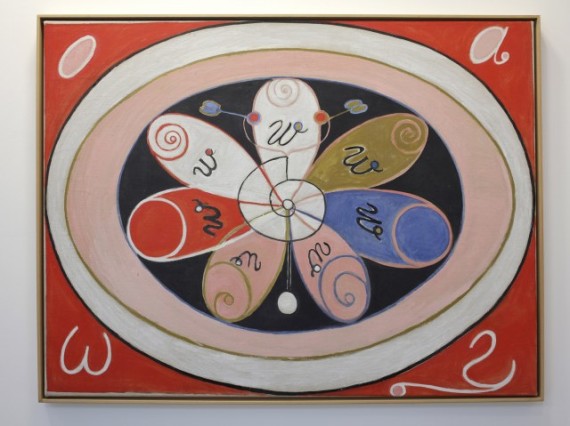 Hilma af Klint, Serpentine, London
Swedish painter Hilma af Klint (1862-1944) is now regarded as a pioneer of abstract art, yet intriguingly her paintings were not seen publicly until 1986 – 42 years after her death. Fearing that she would not be understood by the public, she stipulated that her abstract work be kept secret until after her passing. This show, co-curated by Daniel Birnbaum, director of Moderna Museet, Stockholm, primarily focuses on Klint’s body of work, The Paintings for the Temple, created 1906-15.
Until 15 May 2016. www.serpentinegalleries.org 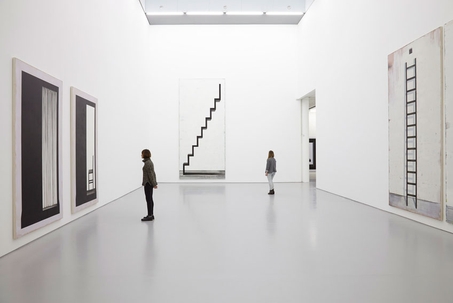 Michael Simpson, Spike Island, Bristol
Michael Simpson’s large-scale minimalist paintings are inspired by 15th century Venetian and early Flemish painting. Religion is the focal point for much of the work in this exhibition – the artist’s largest to date – including works from a series created between 1989 and 2009 that pays homage to the Italian Renaissance philosopher Giordano Bruno, who was burnt at the stake for heresy in Rome in 1600.
Until 27 March 2016. www.spikeisland.org.uk 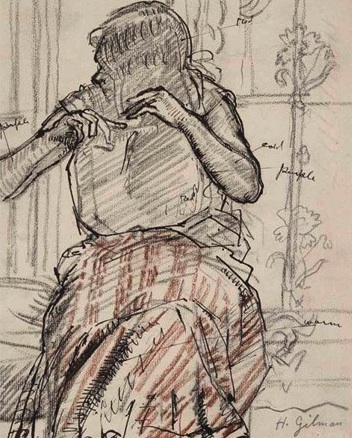 Drawn From Life: People On Paper, Usher Gallery, The Collection, Lincoln
This bumper exhibition features a raft of drawings pulled from the Arts Council Collection. Charting over 100 years of the medium it includes work by high-profile artists including Frank Auerbach, Richard Hamilton and Howard Hodgkin. Recent drawing by Charles Avery and Mimei Thompson bring the show right up to date. This touring show continues to Winchester, Knowsley, Kendal, Banbridge, Canterbury and Leamington Spa.
Until 17 April 2016. www.thecollectionmuseum.com 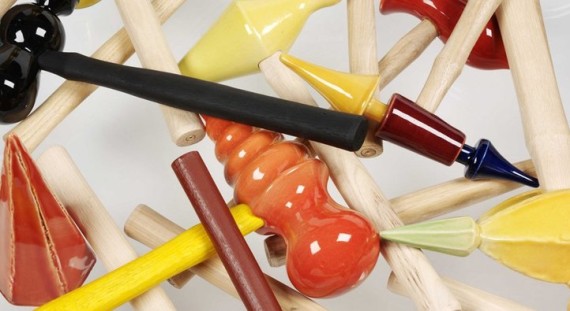 Richard Slee: Work and Play, Tramway, Glasgow
Carlisle-born, internationally-renowned ceramic artist Richard Slee has a reputation for challenging the boundaries of what ceramics can be. This touring show from Tullie House Art Gallery and Museum Trust, Carlisle presents over 60 works from the last 10 years and is inspired by domestic forms of production and recreation, utilising commonplace tools, sports equipment and everyday objects to create fantastical and unexpected objects.
Until 20 March 2016. www.tramway.org