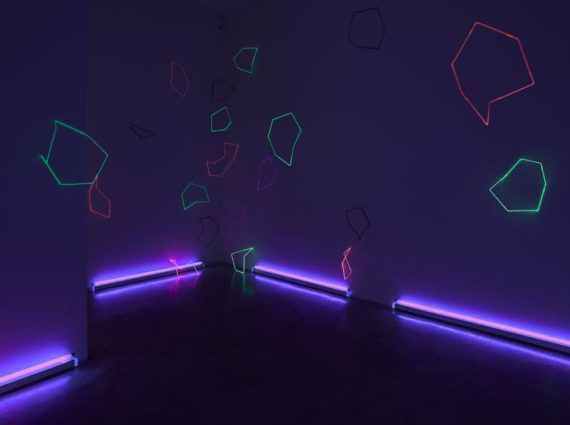 Rana Begum: The Space Between, Parasol Unit, London
Bangladeshi-British artist Rana Begum’s constructivist and minimalist-influenced works draw inspiration from the city environment and the geometric patterns of traditional Islamic art and architecture. For ‘The Space Between’, Parasol Unit presents an overview of her work to date including No. 207, an installation featuring drinking straw sculptures illuminated by UV light, and a new large-scale sculpture, No. 670, made from sections of steel mesh fencing arranged into a massive maze-like structure.
Until 18 September 2016, parasol-unit.org

Marcus Harvey: Inselaffe, Jerwood Gallery, Hastings
Marcus Harvey is probably best known for his infamous painting of Myra Hindley made using prints of an infant’s hand. ‘Inselaffe’ focuses on his most recent paintings, ceramics and bronze sculptures which employ motifs and emblems of Britishness – including military memorabilia and joke shop knick-knacks collaged into portraits of historical figures such as Lord Nelson, Margaret Thatcher and Tony Blair.
Until 16 October 2016, www.jerwoodgallery.org

Michelangelo Pistoletto, Fabrica, Brighton
Italian artist Michelangelo Pistoletto was a leading light of the Arte Povera movement of the 1960s but his work has rarely been shown in the UK. This show includes an installation based on his The Third Paradise manifesto of 2003 and features a labyrinth constructed from cardboard which leads to a mirror with the symbol for infinity laid out in coins.
Until 29 August 2016, www.fabrica.org.uk

Daydreaming with Stanley Kubrick, Somerset House, London
This bumper exhibition features contributions from high-profile artists including Gavin Turk, Harland Miller, Haroon Mirza and Anish Kapoor, all of which have been inspired by the filmmaker Stanley Kubrick. Works on show include Doug Aitken’s Twilight, a public pay phone bathed in a luminous glow reminiscent of the Dr Strangelove scene where Mandrake attempts to make a collect call to the President of the United States. Elsewhere, Sarah Lucas’ Priapus is a phallic sculpture suggestive of the iconic murder weapon in Kubrick’s A Clockwork Orange.
Until 24 August 2016, www.somersethouse.org.uk 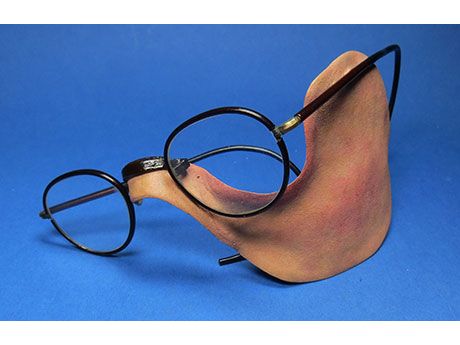 The Body Extended, Henry Moore Institute, Leeds
Featuring over 70 artworks, objects and images, this show explores how sculpture and medical science have augmented the analogue human figure, expanding its reach and power. Exhibited alongside examples of prostheses from a number of collections – including those of the Freud Museum, Hunterian Museum and Imperial War Museum – are works by artists who directly address the relationship between sculpture and prosthetics. Featured artists include Matthew Barney, Rebecca Warren, Rebecca Horn, Louise Bourgeois and Franz West.
Until 23 October 2016, www.henry-moore.org