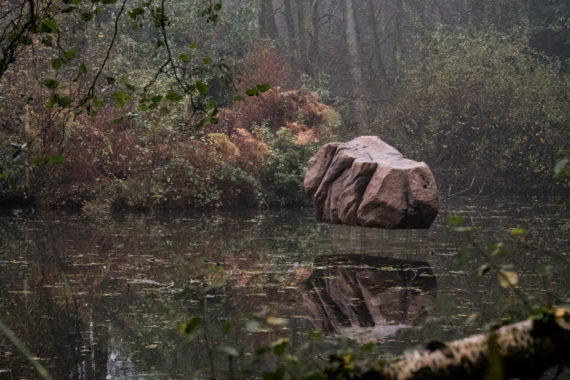 All Alone
This collaboration between Meadow Arts and National Trust features an outdoor exhibition of sculptures and installations set within the recently restored Fishpool Valley at Croft Castle, and a series of accompanying digital experiences with artworks available to view online. The show aims to examine aloneness, a topic that has had many interpretations over the centuries, but has recently been brought sharply to the forefront of our collective consciousness by the Covid-19 crisis. The works in ‘All Alone’ include ethereal photography amongst the trees by Simon Roberts; viewpoints from an artist’s eye via a series of brightly coloured chairs placed in the landscape by Edie Jo Murray; a portal in the delightful hermitage, leading to new writing and a ‘cyborg’s’ response by Kruse; a newly commissioned film made in Fishpool Valley by Adam Chodzko that will be released on site and online; as well as a surreal installation in one of the small ponds by David Bethell.
Until 31 October 2021, Croft Castle, Yarpole www.meadowarts.org JH


Adele Howitt: Ceramic Landscapes
Kingston upon Hull based ceramicist and a-n member Adele Howitt’s new exhibition features work inspired by the natural world. Heavily influenced by the prominence of the man-made waterways that intersect the landscape of her home on the Humber, the location of Howitt’s current home and studio to her work also lies in the fact that the Humber once carried the ceramics of the world-famous Rockingham, Kilnhurst and Mexborough Potteries of South Yorkshire out to the wider world. The works on show here were created using traditional slab work techniques and other methods uncovered by the artist whilst investigating practices used by historic potteries. Other techniques deployed to create the finished pieces include drawing, hand-building, coil / slab building, hand-thrown elements, extruded clay, printing and glazing.
Until 5 September 2021, The Hub, Sleaford www.hub-sleaford.org.uk/ JH

Rebecca Harper: The Waters of Dwelling
a-n member and John Moores Painting Prize 2020 longlisted artist Rebecca Harper presents a solo exhibition of paintings made over the last two years. The works address self-imposed ritual and consolation, seeking solace through physical and emotional connection to oneself, one another and the natural world. The exhibition is inhabited by a cast of characters that are not portraits as such, but intended as actors playing a role on stage. The ‘sets’ in which they appear reflect ‘psychological locations that Harper inhabits and those that inhabit her’, such as her childhood riverside home where she was isolating during lockdowns with her parents, sibling and partner. The symbolic presence of water in many of Harper’s paintings alludes to rebirth, healing and nourishment. As Harper says: “I’ve been thinking about our acts of effortless surrender to the natural cycles of the world. We are reminded that the water accommodates us, we are supported, we are not resisted, it sustains us, cleanses us and we are weightless to it.”
Until 4 September 2021, Anima Mundi, St Ives, www.animamundigallery.com EW

Expanded Interiors Re-Staged
Three years after it was first displayed among the ancient ruins of Herculaneum and Pompeii in Italy, Catrin Huber’s Expanded Interiors is being represented as a new multimedia exhibition at the Hatton. ‘Expanded Interiors Re-Staged’ places Huber’s large-scale installations within Hatton’s unique architecture, while introducing new physical and digital artworks by the artist, including a real-time 3D environment that will enable visitors to virtually ‘walk around’ ancient rooms in Herculaneum and Pompeii. The exhibition also includes a brand-new installation by fellow Newcastle-based artist and a-n member, Rosie Morris, who has been commissioned to develop her own contemporary response to the research done within the Roman houses, and the new venue.
Until 10 August 2021, Hatton Gallery, Newcastle, www.ticketsource.co.uk/hattongallery JH

Margins
Artist Matthew Burrows, who founded the globally successful Artist Support Pledge in response to Covid-19, turns his attention closer to home, curating this group exhibition by artists from his local creative community in Rye, Sussex. Taking place in the newly restored Rye Creative Centre, which houses a studio facility and cultural hub, this selling show brings together over 100 works, ranging from printmaking and sculpture to painting, photography and textiles. Among the participating artists is Caroline Fraser, whose photography responds to ‘the beauty and infinite variation of objects found in nature’; Jenny Pockley who makes semi-abstracted paintings of clouds, mountains and cityscapes that are concerned with the fall of light and subtle play of colour; while Nick Archer’s paintings layer filmic and art historical references in their dark landscapes.
30 July – 20 August 2021, Rye Creative Centre www.ryecreativecentre.co.uk/ EW

Survey II
This touring group exhibition, a partnership between Jerwood Arts, g39 and Site Gallery, presents new commissions by ten early-career artists who were nominated by 30 leading artists including Tai Shani, Sean Edwards and Jade Montserrat. Providing a distinctive snapshot of current artistic concerns and approaches, the show includes three a-n members: Glasgow-based Tako Taal who was nominated by Jamie Crewe, London-based Shenece Oretha, nominated by Zadie Xa and Angharad Williams, nominated by Heather Phillipson. Through works that were developed during 2020 and early 2021, many of the participating artists have responded to the fraught times we are living through, exploring subjects such as how we relate to each other and nature; the representation of queer and marginalised bodies; and the possibility of transformation for both materials and beings.
Until 11 September 2021, g39, Cardiff www.g39.org/ EW

JOURNEY TO THE THE EAST
Artistic Director and a-n member Jian Yi curates JOURNEY TO THE THE EAST – the first live performance festival to be held across Glasgow in over a year since lockdown began. Featuring three days of cutting-edge performances and techno music, premiere film screenings and artist workshops the festival will culminate in a Symposium event featuring a roundtable of special guest speakers. JTTE expands the definitions of Eastern/Mysticism as an exploration of the unconscious mind. Highlights include the Scottish premiere of Yingmei Duan’s Happy Yingmei, previously staged at Hayward Gallery London, and the UK premiere of Frédéric Gies’ DANCE IS ANCIENT, a collaboration with Berghain resident DJ Fiedel. The festival also includes the Scottish premieres of Sin Wai Kin fka Victoria Sin’s If I Had the Words to Tell You We Wouldn’t Be Here Now, Marcos Lutyens’ collaborative work Hypnotic Show with Raimundas Malasauskas originally produced for the Solomon R Guggenheim Museum NY, and the Indonesian-seminal performance group Breathing Forest Dance Theatre’s masterwork, Dry Leaf – live performances on film screening exclusively at the CCA cinematheque.
27 – 29 August 2021, CCA: Centre for Contemporary Arts, Tramway Glasgow & more www.jttefest.com JH

All Bound Together?
Shape Arts annual Open exhibition returns, this year presenting work online by 24 disabled and marginalised artists whose work offers critical perspectives on community and isolation. With disabled people making up one third of Covid-19 deaths and millions of people set to live with Long Covid in the coming years, this timely exhibition raises questions about health, freedom and inequality, amplifying the voices of artists who at the same moment are at risk of being forgotten and disconnected as society ‘returns to normal.’ Among the exhibiting artists are Shadi Al-Atallah, who paints large-scale self portraits which they develop through a process of collecting images, memes and film stills to build ‘fused’ painted figures, and Rowan Riley whose sewn work explores illness and the role of skin as a surface of expression. Meanwhile Louis Blue Newby’s multidisciplinary practice reanimates existing cultural artefacts, creating new queer utopian narratives and bringing into focus peripheral and subcultural spaces.
2 August – 29 October 2021, online www.shapearts.org.uk/ EW

Holly Davey: A Script for an Archive
This solo exhibition by a-n Artists Council member Holly Davey, which was previously shown at Danielle Arnaud Gallery, London, last year, investigates the way we archive and why we collect. A film script is central to the exhibition and takes the reader through a series of questions and reflections that triggers thoughts of existence, memory and absence. The viewer is able to wander through sculptural fragments of the script, both models and large scale, inhabiting the incomplete film set and becoming part of the production process.
21 – 25 July 2021, Chapter, Cardiff www.chapter.org/whats-on/all-shows/holly-davey-a-script-for-an-archive/8176 JH