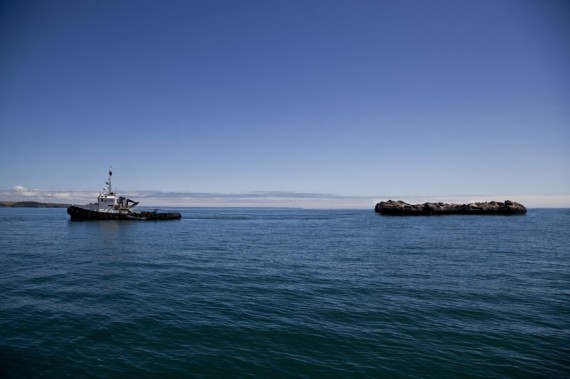 “It’s quite a shock,” says Alex Hartley. “The project has been planned like any other art project, but the sea just hasn’t behaved!” As we speak, Hartley and his expedition team are sheltering from heavy storms that are battering Nowhereisland near the port town of Bideford, north Devon. It’s the last leg of a journey in which high winds and stormy waters have been par for the course.

The epic work of land art has seen Hartley tow a small archipelagic island from the High Arctic region of Svalbard, Norway to the South West coast of England to coincide with the sailing events of the 2012 Olympics. Early in its voyage the island passed through international waters and was declared a new nation state with citizenship open to all. Over 21,000 people around the world have since registered as Nowherians and are helping compile the world’s first online national constitution.

Since July, Nowhereisland and its land-based Embassy has journeyed west through Cornwall, Devon and into the Bristol Channel. Tomorrow it arrives in Bristol, its final destination, and a weekend of talks and performances will mark the last days of this ambitious Cultural Olympiad project that has sought to question the very idea of national identity and nation status.

The grand scale of the commission and its focus on participation is something new for Hartley, whose works are often quite personal, even solitary responses to built and natural environments. “It’s true, it’s not my usual way of working,” he says, “and it may not be something I return to, but it has been a real privilege to hear people – non-arts people – responding to the project.”

Hartley is modest, quietly spoken. He shies away from the limelight – “I turn into a janitor, organising and cleaning” – and he admits he doesn’t envy the public-facing role of Nowhereisland’s Ambassadors: “The Embassy satisfies the engagement aspect of the project,” he explains. “The ambassadors lead people in, help them find something to get a hold of. I wouldn’t necessarily want to be those ambassadors but I’m really pleased they’re there.”

While he might remain an anonymous figure on-site, Hartley holds fast to his artistic control. Arts Council England wanted the island to be a platform for dance and music performances, but Hartley insisted it remain unpopulated. Abject, alien, away from the shore, the work distils ideas of migration, longing and belonging into a powerful sculptural image that is kept always at a distance.

“As nations gathered for the Olympics we were presenting Nowhereisland as a different kind of space, a non-country. This object which sits on its own and resists aesthetic beauty invites us to reconsider how we see ourselves as an island and how we occupy landscape.”

But in a few days time Nowhereisland will be no more. Citizenship ends and the island itself will be physically dispersed: “I thought about the way moon rocks are presented in natural history museums. They are not very interesting as objects but they embody the journey they’ve made. All Nowherians can register to receive a portion of the island – it’s a bit like postal art. I like the idea that a bit of Nowhere goes everywhere.”

Hartley is even hoping to send a portion of the island into space, at the suggestion of someone he met on the journey.

A sense of imagining and possibility has been at the heart of Hartley’s project from the very beginning. “When we found the island back in 2004 my proposals seemed idealised, impossible,” he says. “But through the process of collaboration it has become real.”

Nowhereisland is a Situations project led by artist Alex Hartley, one of 12 Artist Taking the Lead projects for the London 2012 Cultural Olympiad.

Wonders of Weston – Director of Situations Claire Doherty and artist Stephen Hodge on developing a contemporary public artwork for Weston-super-Mare.