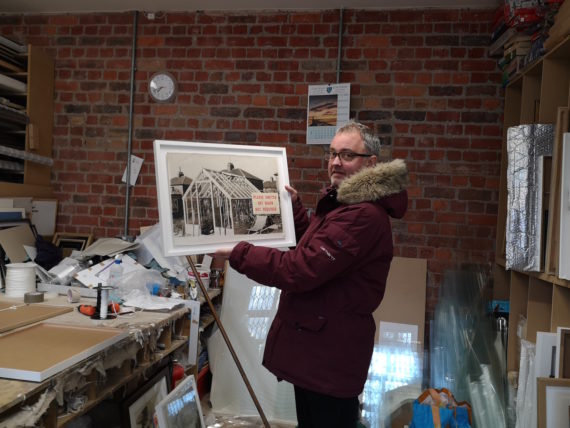 Paul Moss, co-founder and director of Workplace Gallery in Gateshead, has died. He was 43.

Moss founded Workplace with Miles Thurlow in 2005, initially based in a space underneath the 1960s ‘Get Carter’ car park in Gateshead town centre, before relocating to its current home in a former post office building.

Originally from Liverpool, Moss trained as an artist in Newcastle, graduating with a degree in fine art from the University of Newcastle in 1998.

In a moving tribute to Moss on the Workplace website, Thurlow explains how the pair first met in 2002 on a research trip to Rotterdam, where they encountered “a gallery that had no fixed abode, and only had a table which it took from short-term lease to short-term lease”.

He continues: “Immediately attracted by this low cost, low responsibility model, I found myself stood next to Paul, both muttering ‘we should do something like this in Newcastle…’ I had found my co-conspirator, and a two-decade long relationship of plotting, strategising, trying things out, failing and sometimes succeeding had begun.”

Initially working with fellow artist Richard Forster, Thurlow describes how their key concern was the question: “How could artists live and work in the impoverished and chronically overlooked North East of England, but be part of an international art world.”

He goes on to share their “first serious attempt at answering this question” at the Start section of the London Art Fair in 2003. “We buttered up one of the advisors to the fair – Paul Hedge at Hales Gallery – by travelling down to his Deptford gallery and deploying Mossy ’The Scouser’, who we discovered had a natural gift of the gab, and a seemingly endless reserve of energy from which to use it…

“Our artists were basically Paul’s mates from the fine art course at Newcastle University and a few others who were active in the Newcastle art scene. Within a few days we had a call to say the selection panel was coming to visit our gallery in Newcastle. We didn’t have a gallery in Newcastle, so we borrowed a nice apartment on the quayside owned by a friend of Paul’s that he knew from his bar job at Live Theatre…

“We got the gig and took a booth opposite David Risley, who Paul formed an immediate bond with as they both had the same missing tooth, and shared a burning passion for Liverpool FC. Half expecting to be laughed out of town we were stunned to place works immediately with significant collections such as Simmons and Simmons and Government Art Collection.”

In 2017 Moss and Thurlow set up the Workplace Foundation, a charity supporting emerging and under-represented artists based outside of London, in particular the north of England. The Foundation became an Arts Council England National Portfolio Organisation in the 2018-22 funding round.

Moss suffered from Wiskott-Aldrich syndrome and several years ago was diagnosed with an aneurism on his aorta, for which he underwent a number of surgical procedures. Of his illness, Thurlow writes: “He seemed to take it all in his stride – at least on the surface – and it made little difference to his appetite for life and seemingly the only difference was more heavy lifting for me.”

Moss had latterly focused on the work of the Workplace Foundation, developing partnerships with a number of visual arts organisations including Jerwood Arts and Eastside Projects. “Paul was always brilliant at finding new artists,” explains Thurlow, “seeing something in their practice and teasing out aspects that they might not have considered previously.”

Moss was married to the artist Cecilia Stenbom who he had two children with. He was well-known to many at a-n and greatly respected and loved. In 2004 he led a-n’s Fast Forward programme, a series of professional development events for North East art graduates, making a lasting impression on those who worked with him. He will be greatly missed by both the North East and international art world.