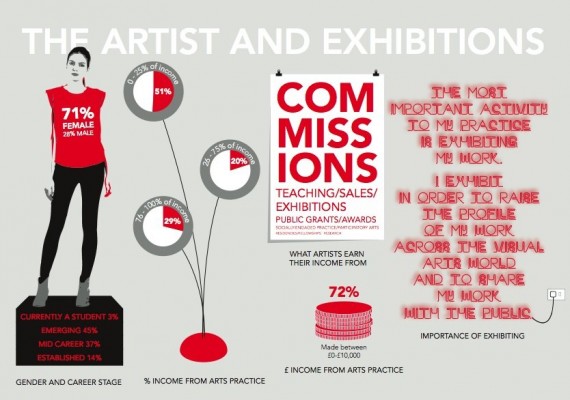 The first set of results of a survey by AIR: Artists Interaction and Representation reveal that the majority of artists receive no fee at all for exhibiting work and most earn less than £10,000 a year from their practice.

Over 1000 artists took part in the UK-wide survey exploring artists’ experiences of exhibiting in publicly-funded venues in the UK. The survey was developed by DHA Communications within a wider campaign to highlight the need to pay and value artists for their vital contribution to arts and culture. The results will inform the next research stages which include discussions with galleries, professional networks and arts funders.

Key findings from the survey include some sobering figures on the income artists earn from their practice:

Sales, teaching and commissions were the key sources of income for artists, with most citing ‘sharing their work with the public’ as the most important reason for exhibiting. However, nearly half of all artists reported that exhibiting their work is prohibitively expensive.

Key findings in relation to exhibiting include:

– 71% of artists surveyed had not received any fee at all for exhibiting. Of those who were paid a fee, over a third received less than £200. Over half expressed dissatisfaction with their fee when set against their experience and status

– 63% of artists have turned down an offer to exhibit for reasons including unsuitability of venue, lack of fees, or non-payment of expenses

– Less than half received production support (technical assistance, etc) from the gallery and less than a third got expenses, such as covering the cost of transporting their work to a gallery

AIR Council member Caroline Wright said: “The aim of the survey is to generate advocacy including knowledge of good practice frameworks, and to shape positive policy change for artists. We hope the campaign will empower artists and galleries to work together to improve the current state of affairs.”

An infographic of the key survey findings can be viewed at www.a-n.co.uk/paying-artists/.

Negotiating a better rate of pay by Rod McIntosh