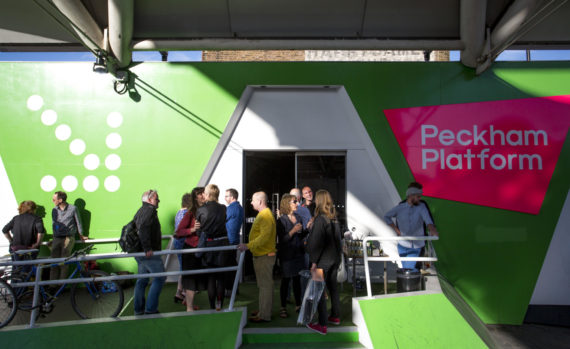 A camera dips and rises over housing estates, back gardens and a basketball court where a few people stop talking to look up into its lens. The scene is accompanied by a soundtrack of footsteps, muffled conversation, a football smashing into a metal fence and the roar of an airplane engine.

This is David Cotterrell’s Slipstream, a two-screen video piece partially filmed from helicopter drones. Commissioned by Peckham Platform in 2011, it maps changing architecture and remembered journeys, Cotterrell gathering residents’ stories about lost areas of Peckham which then informed the helicopter’s routes.

Slipstream is one of 20 commissions featured in Peckham Platform’s current retrospective of its work since it launched in 2010. Each piece has involved an artist working with local people to co-create artworks.

Continuing until 5 March 2017, the show marks the end of the gallery’s seven-year occupancy of its distinctive zig-zag space across the square from Peckham Library on Peckham High Street. The area is undergoing redevelopment next year and while the details are still to be finalised, the organisation expects to occupy a new gallery space on Peckham Library Square. 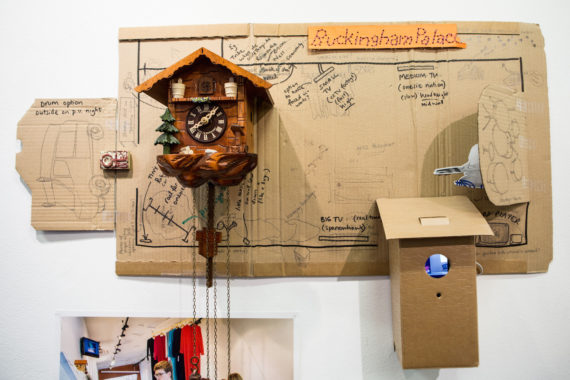 Reflected in both Cotterrell’s piece and the gallery’s imminent relocation, change and loss in the south London neighbourhood threads through the retrospective.

“I think the evolving narrative of Peckham is a really interesting theme,” says Emily Druiff, the gallery’s executive director. “It’s such a rapidly changing urban environment, and some of the projects have quite a different tone to three or four years ago.”

Commissions have ranged from film pieces and archives, to a publishing house and a mobility scooter rally. In the exhibition, each of these is represented with just 1.1m of wall. The content derives from the gallery and artists’ archives and consists of photographic documentation, video pieces, memorabilia, installation and booklets.

Together, this creates a chronology that traces Peckham’s recent history from the perspective of its residents. The show is dense with stories that tell us about the abundance and plurality of the area.

In 343 Perspectives from 2012, Nikolaj Bendix Skyum Larsen rode the 343 bus, meeting people who use the route. He then produced a series of film vignettes about locals’ lives which take the form of performances, fly on the wall observations and interviews. It’s a beguiling mix of Peckham interiors and exteriors, with multiple accents and voices. 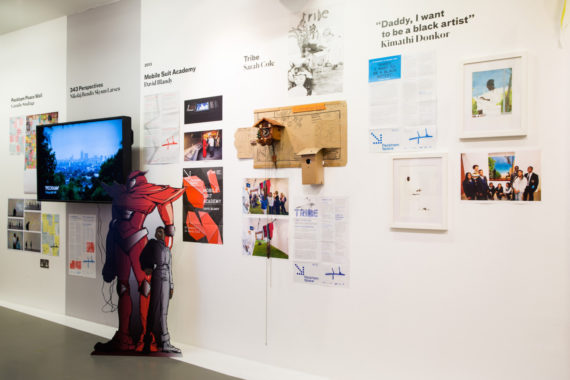 The retrospective is not just a straightforward celebration of the gallery’s legacy, however. It’s also a timely reminder of the changes that have taken place in Peckham since 2010, many of which resonate in a wider social and political context.

“Peckham is facing all these challenges now, with gentrification and displacement of communities, and people effectively being priced out of the area,” says Druiff.

Artists are among those affected by the pace of regeneration, as affordable workspace is vulnerable to redevelopments. Last year, Southwark Council rejected Bold Tendencies and Second Home’s joint proposal to convert a multi-storey carpark into the site of 800 artist studios.

“Some of the community groups that we worked with have had their funding cut,” continues Druiff. “Some of the venues are no longer in existence. I think that the idea of safety and continuity is even more pertinent than it’s been before.”

The quest for security is visible in 2013’s Tribe, for which Sarah Cole worked with a group of young women, exploring what contemporary feminism meant to them through performance and installation. In the retrospective, Tribe is modestly represented with a cardboard plan of the original exhibition, a cuckoo clock, a drum kit, and video piece.

On a tiny screen housed in a cardboard birdhouse, you watch the group in onesies and animal masks as they dance and climb out of large cardboard boxes in public spaces.

“They felt safer when they were anonymous, so they wore masks for their video piece,” says Druiff. “Wearing onesies made them feel powerful.” Part fairy tale, part music video, there’s innocence, abandonment and strength in their poignant performance. 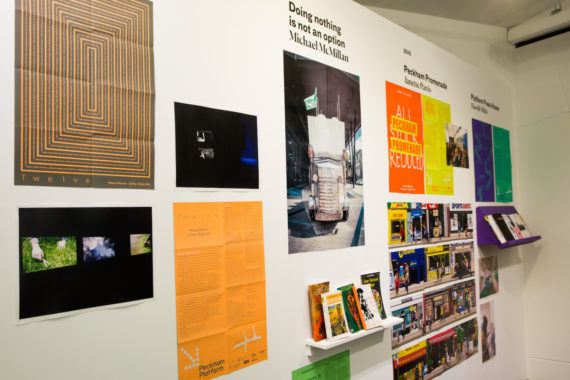 According to Cole, this condensed version of Tribe and the passing of time have altered the piece’s meaning. “The assemblage proposes something of the tensions and delights of adolescence that I encountered when working with the group,” she says. “In its miniature form, it also says something about time and loss, hope and memory.”

Stepping out of the gallery, people move between the noisy congestion of rush hour traffic. Across the road is an empty shop, while colourful high life blasts from the small but vibrant Peckham Palace. Much is recognisable from the show and it’s easy to see how entwined Peckham Platform is with its changing locale.

The gallery also has ambitions to grow beyond its current remit, and the new venue would give it four or five times more space to realise this. Says Druiff: “It would mean that our learning could expand, not just for immediate communities, but also for social arts research and our academic partnerships.”

The overriding priority seems to be its deep commitment to the area. “We want to stay in Peckham and continue fostering positive relationships around inclusion and engagement for communities that might not otherwise have access to those resources,” adds Druiff. “For me, it really feels like a responsibility.” 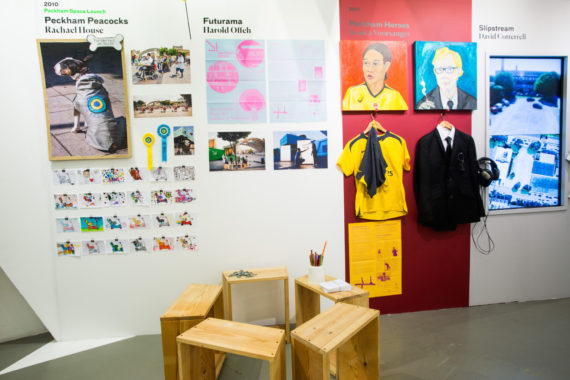 Corrections: Paragraph seven of this article originally referred to a ‘mobile scooter rally’; this has now been amended to ‘mobility’. For clarity, in paragraph four ‘sketchy’ has been replaced by ‘to be finalised’.