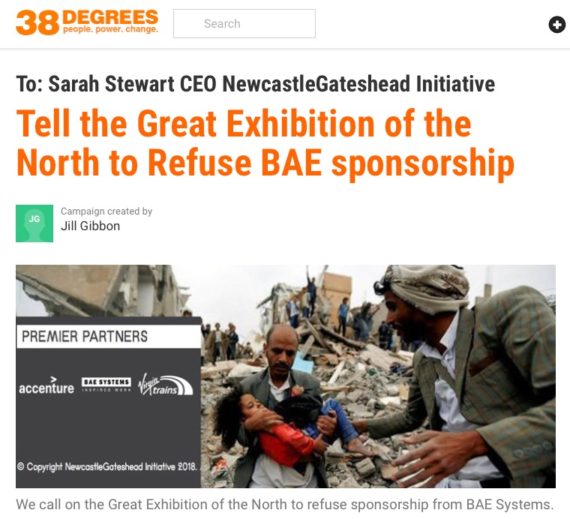 A petition has been launched calling for the Great Exhibition of the North to refuse sponsorship from the UK arms manufacturer BAE Systems.

BAE Systems has been accused in a report by the charity War Child UK of “profiteering from the deaths of innocent children”, in particular in relation to its continued sale of arms to Saudi Arabia, currently involved in a bloody and devastating conflict in Yemen.

The petition, which was created by the artist and activist Jill Gibbon, states: “British arms companies including BAE have made more than £6bn from sales to Saudi Arabia during the ongoing war in Yemen. International humanitarian law prohibits attacks against civilians yet the British armed Saudi-led coalition has bombed schools, markets, hospitals, and health centres.

“The conflict has killed or injured more than 5,000 children, while survivors face malnutrition and disease with the collapse of infrastructure. Unicef warns that, ‘nearly every child in Yemen’ is in need of humanitarian assistance. The Great Exhibition of the North claims to offer ‘family-friendly fun’. This is totally at odds with its with association with BAE systems.”

Artists have been expressing their anger at BAE Systems’ involvement with the event. The musician Nadine Shah tweeted: “I will no longer be playing the @getnorth2018 festival now that I have discovered BAE Systems are a sponsor. I am disgusted to hear of their involvement and refuse to be in any way associated with them. I encourage all artists involved to follow suit.”

The Yorkshire-based Commoners Choir has also pulled out of its scheduled event. In a statement on its website, the group said it had not taken the decision lightly and praised the event’s commissioners for their support: “None of us are ever ideologically ‘pure’, and this is not about making judgements on how other people work (not least the many thousands of people working at BAE).

“But in this case, and in a time when weapons manufacturers (or in fact, their shareholders) benefit so heavily from civil wars, nuclear weapons proliferation and personal gun-use, we felt that as artists we couldn’t justify working under the shadow of BAE’s reputation.”

The artist Darren Cullen, whose work often addresses issues around militarism and war, tweeted: “Nauseating that @getnorth2018 have partnered with a weapons company. BAE Systems make their money from the *destruction* of people’s lives, culture, infrastructure & community, yet you’ve invited them into a festival that’s supposed to be about creativity.”

BAE Systems describes itself as the ‘UK’s largest defence, aerospace and security company’ and has more than 18,000 employees (over half its UK workforce) based at sites in the north of England.

In 2016 its chairman Sir Roger Carr said in response to criticism about arms sales to Saudi Arabia: “We are not here to judge the way that other governments work, we are here to do a job under the rules and regulations we are given.”

Announcing its sponsorship of the event last month, BAE Systems’ Chris Boardman, group managing director, air, said the company was “delighted” to be supporting the project, adding: “We’re very proud to be part of the Great Exhibition of the North which celebrates the skills, products and contribution made in the North.

“Our sites and highly skilled workforce in the North of England lead on the delivery of some of the largest and most technically advanced engineering and manufacturing projects in the world.”

UPDATE, 3.55pm, 2 March 2018: Statement from Great Exhibition of the North
Approached by a-n News for a comment on BAE Systems’ sponsorship, Great Exhibition of the North chair Sir Gary Verity said: “The Great Exhibition is a once in a lifetime opportunity to bring together our region’s inventors, engineers, artists, designers and makers to celebrate the technological innovation, art, design and culture of the North. Delivering an event of this scale is only possible thanks to the support and participation of public and private sector organisations alike.

“Our collective focus, working with all of our funders, supporters and contributors, is to make the very most of this opportunity to change perceptions of the North of England and drive future growth and success.

“Each of our sponsors makes an important contribution to helping us achieve this aim. BAE Systems employs more than 18,000 people in the North of England and is a world leader in engineering innovation, manufacturing and technology. BAE Systems is supporting the Great Exhibition of the North as part of its commitment to address the UK skills shortage by encouraging more young people to consider science, technology, engineering and maths (STEM) careers.

“Organisations such as Arts Council England and Heritage Lottery Fund meanwhile, are supporting the delivery of our artistic content, including the walking trails and commissions, concerts and exhibitions at Baltic and Sage Gateshead.”

UPDATE, 4.50pm, 2 March 2018: Joint statement from Sarah Munro, director, Baltic, and Abigail Pogson, managing director, Sage Gateshead
“BALTIC Centre for Contemporary Art and Sage Gateshead acknowledge the concerns raised by artists, members of the artistic community and our partners in connection to the sponsorship of Great Exhibition of the North.

“We wish to reassure our artists, partners and stakeholders that Arts Council England funds are supporting the delivery of our artistic content, including the concerts, exhibitions and offsite commissions presented by BALTIC and Sage Gateshead. We are not in receipt of funds from BAE Systems.

Our conversations and commissions with artists and partners began some months and years ago, well in advance of the announcement of BAE Systems as a Premier Partner of the Great Exhibition of the North.”