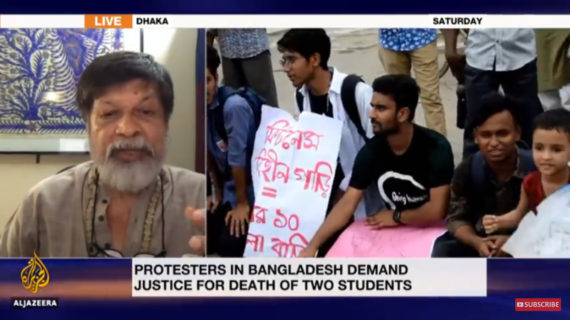 Bangladeshi photographer Shahidul Alam arrested after criticising governing body, the Awami League The 63-year-old photojournalist, teacher and social activist was detained after he gave an interview to Al Jazeera media via Skype from his home in Dhaka. He has been charged with making ‘provocative comments’ about the government’s handling of recent protests. Alam was seen limping after the arrest in a video posted on social media, with some commentators saying this is evidence he was beaten.

As Artforum reports, in the interview Alam accused police of enlisting ‘armed goons’ from the Chhatra League, which is the governing body Awami League’s youth wing, to attack unarmed students. The actions originally began in response to dangerous road conditions which had contributed to the deaths of two students who were killed by a speeding bus.

However, things quickly escalated resulting in a rally against the ‘corruption of the Awami League’. After authorities fired teargas and rubber bullets into crowds of demonstrators, Alam said: “It thought that fear and repression would be enough, but you cannot tame an entire nation in this manner.”

According to Amnesty International, Alam could face a minimum of seven years and a maximun of 14 years in jail for giving the interview.

In response, over 400 photographers, filmmakers and artists in India have signed a letter demanding the ‘immediate, unconditional and honourable’ release of Alam from detention. They state: “Legitimate criticism of, and disagreement with government action is the inalienable right of every citizen in a democracy, and if that is what Shahidul Alam is being prosecuted for then it is a worrying sign that the state in Bangladesh is slipping towards autocracy.”

New interim director appointed by NN Contemporary The Northampton-based contemporary art space, whose previous director Catherine Hemelryk has moved to CCA Derry-Londonderry, has appointed Louise Clarke as its interim director. Clarke, who since 2000 has co-curated and programmed public art events through the Big Draw campaign, has worked with institutions such as the British Museum, The Natural History Museum and the V&A.

A statement from NN Contemporary announcing her appointment said Clarke would be ‘working alongside the [NN Contemporary] team, reflecting on previous exhibitions and events with a plan to refresh our current offering. She will also be working over the coming months to ensure our programme of exhibitions will continue uninterrupted’.

Pussy Riot protester defies travel ban to flee Russia for Edinburgh Maria Alyokhina, one of three members of the protest band Pussy Riot who stood trial in 2012 for performing an anti-Putin ‘punk prayer’ in a Moscow church, has defied a travel ban in order to appear at the Edinburgh International Book Festival.

The Guardian reports that Alyokhina was stopped by Russian border guards who said she couldn’t leave the country because she had refused to serve a community service sentence for another protest. Her response was to drive more than 1,000 km through Belarus and then into Lithuania, where she boarded a flight for the UK.

““It was nothing extraordinary,” she told the Guardian. “It was like many Russians leave [the country], legally.” Alyokhina is in Edinburgh to promote her book, Riot Days.

Visas refused for a dozen authors invited to Edinburgh International Book Festival The festival’s director Nick Barley has said that a dozen authors who were planning to attend the festival have had visas turned down by the UK, describing the process of applying as “humiliating”. He added that the experience will deter artists from visiting the UK in the future.

Speaking to The Guardian, he said the festival has had to seek help from “MPs, MSPs, ambassadors and senior people in the British Council and Home Office” in order to overturn visa decisions. “We’ve had so many problems with visas, we’ve realised it is systematic. This is so serious. We want to talk about it and resolve it, not just for [this festival], but for cultural organisations UK-wide.”

Montreal Museum of Fine Art ad featuring nude Picasso painting censored by Facebook The offending work, entitled Women at Their Toilette, Cannes, was rejected by Facebook’s censors because it features a number of nude subjects. Although the social media platform’s community guidelines supposedly allow users to post artworks featuring non-photographic nude figures, this is not the first time artwork has been censored.

Previous work that has fallen foul of Facebook’s rules include one of Copenhagen’s most photographed sculptures, The Little Mermaid. An image of the work taken by Social Democrat MP Mette Gjerskov was removed from her page because it featured ‘too much bare skin or sexual undertones’. Other examples include online arts magazine Hyperallergic, which was censored for posting an article that included artist Kate Durbin’s photo of a woman’s ‘exposed butt’. 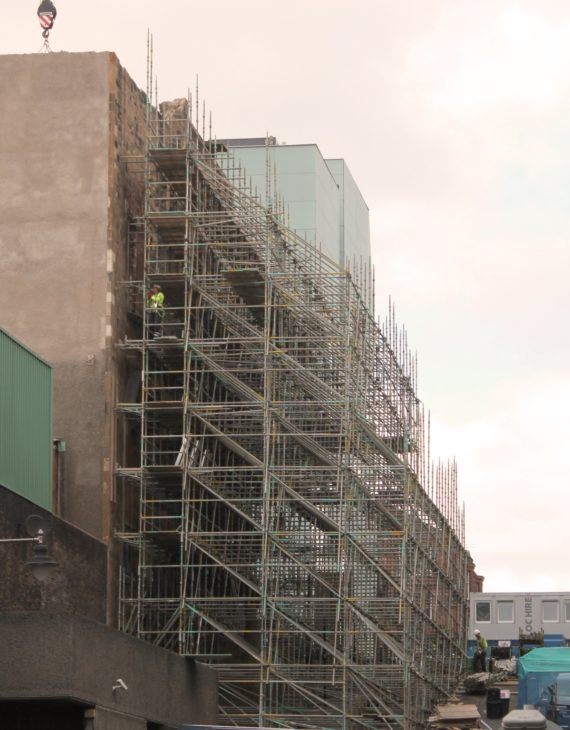 Glasgow School of Art stabilisation work reaches half way point The east gable of the Mackintosh Building is expected to be fully stabilised by 21 August, with work also beginning on the west end of the building.

The school has also revealed that much of the building’s masonry was judged too damaged to keep, and was therefore moved safely into the building. However, some pieces were retained and removed from the building in preparation for storage off site.

Professor Tom Inns, director of GSA, said that he hopes the security cordon, which has caused problems for numerous businesses around the site, will also be reduced soon.

He commented: “Last week saw the beginning of scaffolding work on the east gable which is an important step forward in making this area on Dalhousie Street safe. We are also moving forward with plans for the bracing work which will secure the east and central sections of the south façade above Sauchiehall Street. Once this work is complete we will advise Glasgow City Council Building Standards so they can consider reducing the size of the security cordon.”