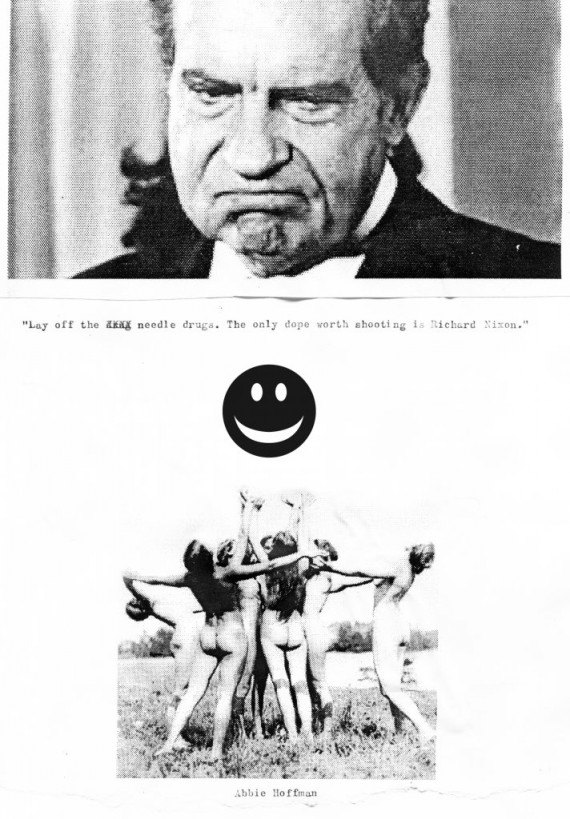 There’s a photograph of Richard Nixon, the 37th President of the United States, looking sombre and dejected in AMC Journal Issue 7, The Great Refusal. It’s part of a collage by the activist Abbie Hoffman that includes the caption: “Lay off the needle drugs. The only dope worth shooting is Richard Nixon.”

The statement is underscored by an image of an ‘acid face’ and, below that, a photograph of a group of hippies, holding hands and rejoicing in naked ecstasy. This collision of cultures, images – made, appropriated and arranged – and the use of text to either complement or contradict their pairing, is a feature throughout the book.

A diverse and richly rewarding publication, it prods and pulls back the layers of post-World War II protest and counter-culture. Nixon, whose legacy is defined by Vietnam, the Watergate scandal and being the only US President to have resigned, is an appropriate figure to find at the heart of this political zine.

Published by the endlessly fascinating Archive of Modern Conflict to accompany an exhibition of the same name at The Hayward Gallery in London, The Great Refusal is a veritable treasure trove of propaganda posters, photographs and miscellany, setting forth an exploration of how new forms of protest took on existential and psychedelic fervour amidst the looming presence of atomic apocalypse.

Featuring, but not limited to, the student demonstrations of 1968, the Red Army Faction and Women’s Action for Nuclear Disarmanent, The Great Refusal proposes a vision that at once encompasses the prospect of instant annihilation and a longing to live in the continuous present.

AMC Journal Issue 7, The Great Refusal is published by The Archive of Modern Conflict. For more information or to order a copy visit amcbooks.com

An exhibition of the works is currently on display at The Hayward Gallery, London, until 5 January 2014. southbankcentre.com

Read all the articles in the PICTURED series via @tags pictured