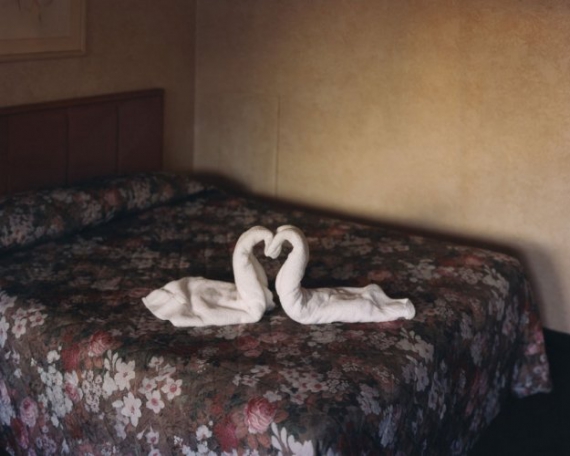 Beyond the canonical status achieved from his first monograph, Sleeping by the Mississippi (2004), and the singular poetic vision this revealed, perhaps the main reason Alec Soth can be considered one of the most innovative contemporary photographers of his generation is due to the way he reinvents his photographic language with every project.

A book-artist at heart, and operating series by series, the Minnesota-born photographer has produced a vastly eclectic corpus of work. His book Niagara (2006) was formally shot in the lyrical documentary vein, focusing on love and death against the backdrop of the falls. In the multi-layered and complex Broken Manual (2010), his pictures of hermits mix black and white with colour, images are by turns sharp and grainy, large and small, and extreme cropping is used – the series has come to represent his own desire to escape from conventions.

Akin to short stories that evoke the writing of Mark Twain, William Faulkner or Flannery O’Connor, each body of work is infused with a gentle melancholy. Soth reveals the hidden yet fundamental qualities of the individuals he has encountered, taking his viewers on a transformative, sometimes disturbing journey through the American experience and beyond.

His latest book, Ping Pong Conversations, published by Contrasto, comprises a broad yet chronological discussion with Italian curator and critic Francesco Zanot, centred on his most famous photographs and also others that are less well known. A personal reflection on his career to date, it allows us to delve into his practice, teasing out art historical references, improbable anecdotes (such as a 2010 Brighton Photo Biennial commission, where the only solution to problems at Customs due to his lack of a work visa was to recruit his young daughter, Carmen, to take the pictures), and the oft-mysterious circumstances in which certain photographs were taken.

Part theoretical, part contextual, Ping Pong Conversations is an immensely satisfying read. It is testament to both Soth’s sensitive understanding of the world around him and his unique storytelling ability as a photographer.

For more information or to order a copy visit contrastobooks.com