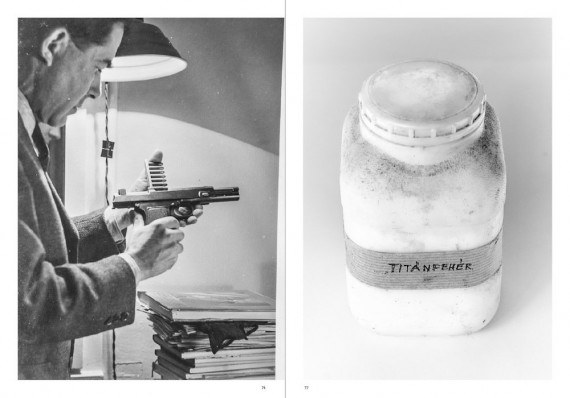 ‘A painter and a photographer. They communicate with each other by means of images, through the images; and what could be the medium of remembrance but a volume of images?’ So writes Gabriella Uhl in her essay introducing Arion Gábor Kudász’s Memorabilia, an artist book that also serves as the catalogue to an exhibition of the works currently on display at the Hungarian House of Photography, Budapest.

When his mother passed away in November 2010, Kudász set out to deal with the loss through describing, cataloguing and classifying her possessions. In a consistent, almost typological series of photographs, he has documented everything from crockery and ornaments to clothes and locks of hair. Even her paintbrushes, collection of peculiar lighters and yoga manuals are included as part of the encyclopaedic inventory. So too are envelopes, handwritten notes and – we’re told – the odd cautionary tale scribbled on a notepad, giving the impression of a dialogue between mother and son, as if it were a hidden communication from beyond.

By extracting these personal objects from their usual environment and isolating them for the camera, they become alienated and austere, a feeling that is accentuated by the objective manner in which they are photographed. These extremely detailed renderings of objects also suggest the photographer’s heightened state of awareness at every moment during the grieving process, while his mother’s presence is played out image by image, albeit symbolically.

While Memorabilia won’t fill the void, it is indeed a poignant and elegiac tribute. Kudász’s museum of loss, his cabinet of curiosities, is one that beautifully represents the distinct worldview of its owner – and what more can we hope for than that?

For more information or to order a copy of Memorabilia, visit arionkudasz.com