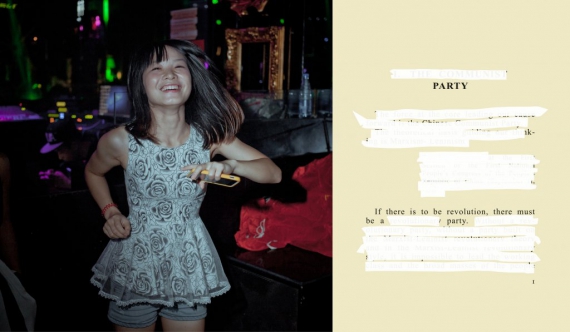 The red tassel used as a bookmark in my copy of Cristina de Middel’s Party: Quotations from Chairman Mao TseTung has been placed, somewhat suitably, in between two pages that contain the statement: ‘If there were no contradictions, life would come to an end.’

For this, her latest photobook project, the Spanish photographer has reworked Chairman Mao’s Little Red Book, a collection of quotes from the Communist party leader. Published extensively from 1964 to 1976 during the Cultural Revolution, the Little Red Book has been said to be the only thing more omnipresent in China at the time than the image of the revolutionary himself. Like the original, de Middel’s book is A6 in size and bound in a red cover, its title embossed in gold print.

De Middel’s recontextualisation essentially involves eliminating or marking out whole passages of text while bringing other snippets to the fore, combining them with her own photographs from a recent trip to China. As such she forces new narrative meaning, one that is achieved through wry visual observations in tandem with wordplay.

A pile of precariously stacked oranges are bound together by Sellotape, husbanding the words ‘struggle, oppression’. In other instances, a portrait of a woman whose face has been whitened out by the use of strong flash is accompanied by the words, ‘people who are abstract’. Elsewhere, a lone male figure who resembles Mao himself, is cast under pink dappled light and paired with the phrase: ‘this monster will be eliminated in the not too distant future’.

The book is a personal reflection on China’s authority, politics and attitudes to gender, as well as its people’s daily existence. The result is a searching examination of 21st century China – a socialist state hell-bent on the pursuit of capitalist economies – done with acuity and to humorous effect.

For more information or to order a copy of Party: Quotations from Chairman Mao TseTung, visit amcbooks.com