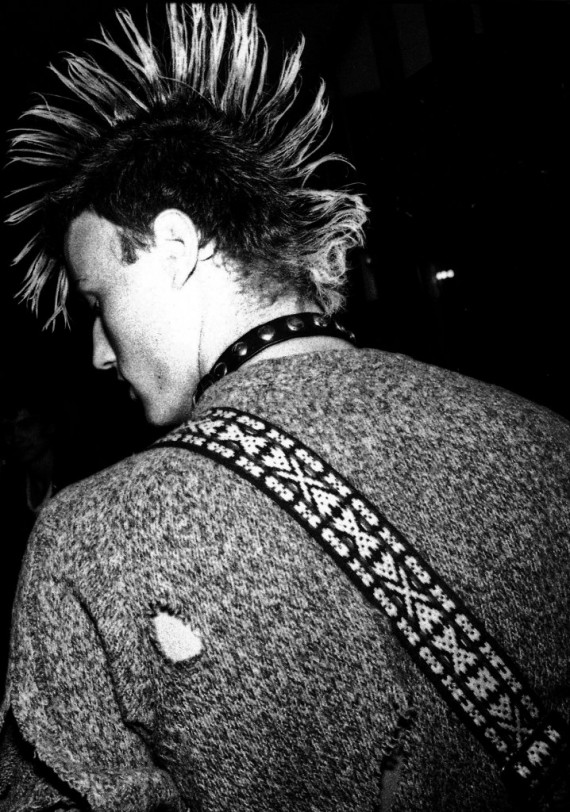 “I’ve been to about 1,600 concerts on my count; at my first, Siouxsie and the Banshees in 1981, I was able to walk near Siouxsie on the stage!  Can you imagine that today? On the other hand, people were arrested just for wearing a Sex Pistols badge.” So writes Jože Suhadolnik in the introduction to his new book Balkan Pank, a series of black and white photographs shot during the 1980s in Slovenia, at the time part of the Socialist Federal Republic of Yugoslavia.

The images in this slim, 108-page book flash by; raw and visceral, intimate portraits soon give way to people waiting for gigs to start, crowds swelling, moshing, fighting – middle fingers and all. As proceedings are interrupted and the makeshift spaces abandoned, we’re left with scenes of graffiti on toilet walls, empty corridors, the vestiges of an event.

After a while, this view from the inside thrusts the viewer vicariously into a drama that moves from squat to squat, gig to gig, as if life is one endless cycle of parties, wasted nights, hangovers and slow recovery. Everything in Suhadolnik’s underworld is shrouded in photographic darkness, claustrophobic and intense. Time compresses.

Having originally turned his hand to documenting the punk scene aged just 13, at 16 Suhadolnik was already a fully-fledged professional photojournalist. He has since been published in numerous newspapers such as Slovenia’s daily Delo, working for agencies including EPA, Associated Press and Reuters before finally founding his own press outlet, Bobo.

Punk is about doing things your own way and offers freedom and genuine individuality. Similarly, the DIY cultural rebellion documented in Balkan Pank is aptly reflected in the approach of its publisher, AKINA Books: the entire production process is handled inhouse, from the editing and graphic design through to printing and binding. This rough and gripping portrayal of individuals escaping the constraints of Communist rule could hardly have found a better home.

For more information or to order a copy visit akinabooks.com.