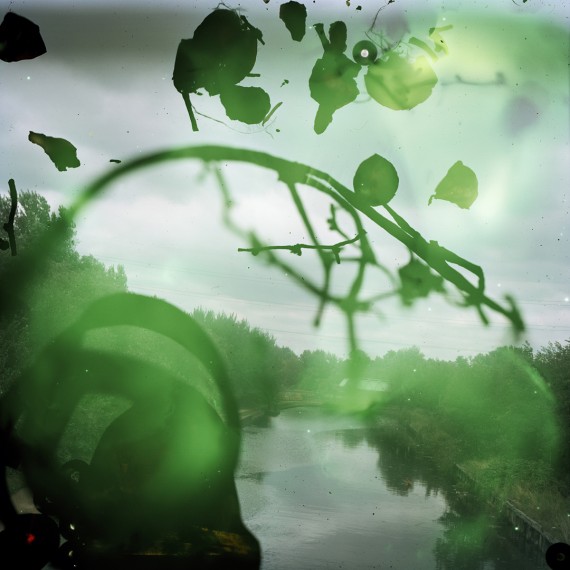 It’s as if we’re standing at a window of a squat looking out into the world: people ebb and flow, fragments of found objects obscure our vision and nature comes crashing in. In his latest photobook, Talking To Ants, British photographer Stephen Gill brings us his most unusual images of the London Borough of Hackney to date by physically inserting bits and pieces of detritus inside the camera body before photographing his local surroundings.

Streets, housing estates, markets and canals provide the backdrop for images embedded with various forms of plant life, insects, plastic and even tiny fragments of broken glass from a car headlight. Objects thus appear simultaneously both behind and in front of the camera lens, creating curious juxtapositions between surface and reality. As a result, flatness counters depth to disorientate our perception of different pictorial planes. What we get is a multi-layered and heightened sense of place, form and texture that works to harness not just what the area looks like but also how it feels.

For the best part of twenty years Gill has been photographing his stomping ground in east London, turning his lens to everything from the backs of advertising billboards to cinema audiences and shopping trolleys with his trademark wit and sense of irreverence. Here, however, he takes it one step further. Talking To Ants sees Gill consciously asserting less control, working half-blind and allowing elements of chance to take their course. He grants us in-camera photograms for the new age, and in turn an obsessive, macro view of Hackney – a place of contrasts, creative verve and parasitic property developers.

For more information or to order a copy visit nobodybooks.com