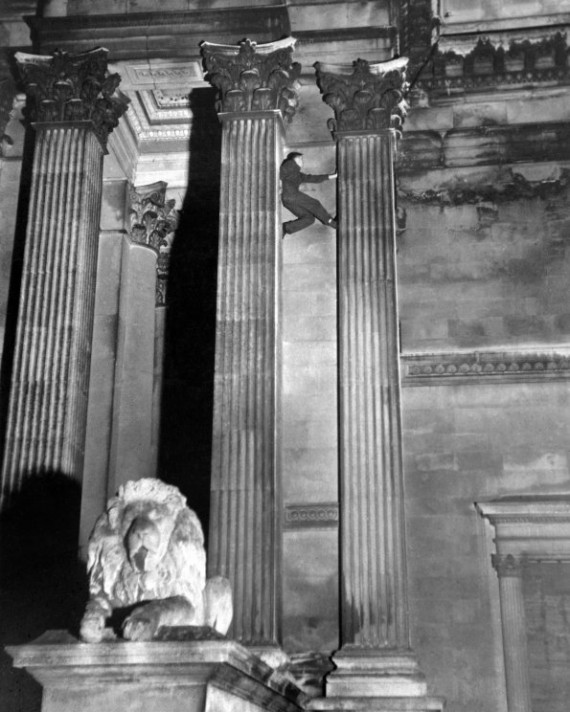 ‘Some airy devil hovers in the sky,’ reads a delightful, hand-written note on the verso of an inserted photograph from Thomas Mailaender’s The Night Climbers of Cambridge, recently published by The Archive of Modern Conflict. ‘It was this quotation,’ it continues, ‘which gave me the idea of the climb.’

Mailaender, a Parisian artist described as ‘Bernd and Hilla Becher under the influence of Pastis’, recently acquired this curious collection of prints depicting Cambridge University undergraduates from the 1930s, who photographed themselves in action whilst climbing the city’s rooftops. At times, the students exhibit a reckless disregard for their own safety as we see them scaling 40ft high walls or hanging off window ledges and guttering.

Elsewhere, we watch them clambering up drainpipes and perched atop spires, all pictured under the glare of the moon, camera flashes and the watchful eye of the occasional policeman. Like escaping fugitives (yet wearing blazers and ties), these daredevils come alive in the shadows and fog, absorbing the energy of the night-time to test their limits and discover those passions that are suppressed all day.

The book, of course, has its precedent. First released in 1937 by the esteemed publishing house Chatto & Windus, The Night Climbers of Cambridge was authored by Noel Edward Symington, who operated under the ingenious alias of Whipplesnaith – a fusion of the Middle English word whipple, meaning to move around briskly, with an old Norse term signifying a piece of ground.

Yet what the Archive of Modern Conflict unlocks is a fun, expansive and bewitching take on the phenomenon of ‘buildering’, all brought together in a gorgeously produced and tautly edited new edition.

For more information or to order a copy visit amcbooks.com