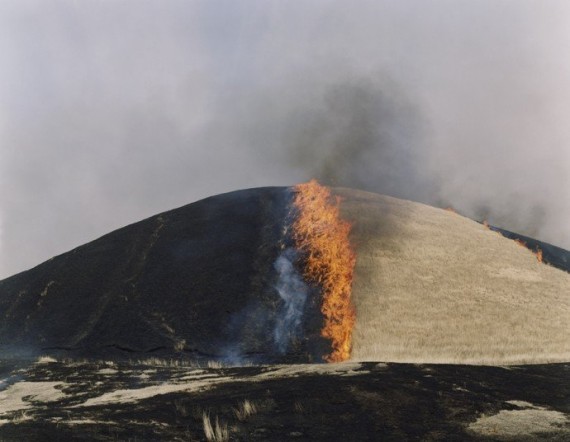 Rinko Kawauchi’s photographs are always emerging. They show us the point of becoming or passing, the moment at which forms begin and end.

The Japanese photographer is known for her unique brand of poetic photographs that concentrate on details so obvious that they almost go unnoticed. Some of her most instantly recognisable images include a drop of milk slipping from a baby’s mouth, lightning assaulting a building, the sun winking through trees, and spider patterns in fractured glass. Her work is the product of sustained looking of the most dreamy and introspective kind. She piles melancholy on melancholy.

Now, for her latest series entitled Ametsuchi, just published as a book by Aperture, she has taken the tradition of yakihata (an agricultural practice dating back 1,300 years in which fields are burnt to prepare and enrich soil) as her starting point to explore the cycles of life – its origins, its decay and its regenerative essence.

Leafing through its pages, we are confronted with scenes of poised turbulence, full of fragility and transcience yet loaded with meaning. Flaming fields are the recurring motif, bathed in soft, almost painterly colours and shot from dynamic perspectives. It’s both a celebration and lament to the fragility and fertility of the Earth, as well as an unremitting and poignant reflection of nature’s power.

Yet, hers is a strange kind of vision, not quite total. The works are like half-images or the tenderest lines from a poem – fragmented and abstract yet somehow resolving into a whole. Indeed, her decision to include other subjects such as planetariums, night Kagura dances, the sky viewed from her home and even the Wailing Wall in Jerusalem at first glance seem discordant but, as Kawauchi states, this all part of her undulating narrative pattern.

“They all lie in a haphazard array with seemingly nothing to connect them,” she says. “But when lined up on a single time axis something can be read from these things too. There is an invisible point of tangency between apparently unrelated things. I investigate the connection between dreams and reality; I consider the beginning of things.”

Ametsuchi is no masterpiece, and certainly doesn’t rank up there with her mesmerisingly beautiful Illuminance (2011) and Aila (2004) titles. But for the mere pleasure of the eye, the surer we are of her mastery – always emerging.