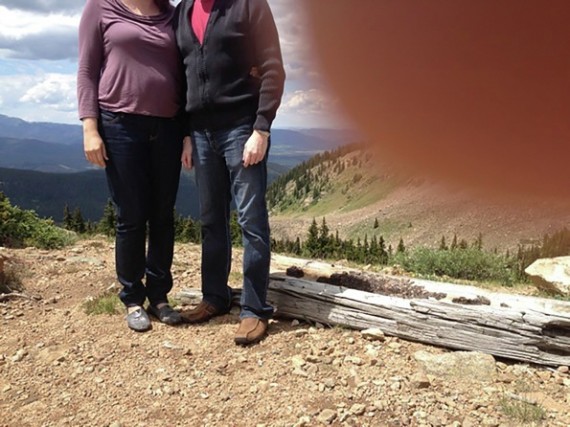 The latest addition to Erik Kessels’ highly-acclaimed In Almost Every Picture photobook series is distinctly peculiar, even by the standards of this masterful Dutch editor and curator. While previous books have included oddly endearing images of pigs being bottle-fed by customers at a Montreal restaurant or a Japanese rabbit with various objects balanced on its head, here he takes us on a tour of photography’s simplest error: a blurry finger accidentally appearing in the frame.

Kessels, who has forged a career by rescuing and recontextualising images from the quagmire of vernacular photography, has brought together a sublime strand of his collection, offering an inexhaustible look at what would otherwise be considered ‘mistakes’ by their original owners. We are mostly treated to holiday snaps and family portraits, amateur photographs that have gone awry. Fragments, glimpses and snatches of giant fingers obscure every picture, resulting in abrupt crops and hilarious intrusions.

However, as Kessels explains: “In some images, the finger-intruder borders on ominous, as in a picture of a can half-lost in grass at night, part of a hand bisecting the frame. In others there’s a certain poignancy: see the old shot of a young man in uniform. Was he going to war? Was this damaged photo kept because it would be the last image of a friend, brother or son?”

At times uncanny or spooky, like a 19th century spirit photograph, the images become suffused with a melancholy and mystery that is unavoidable. While the book’s final flurry reflects on the digital era, with rogue fingers just as widespread now as in the medium’s black-and-white infancy, we end by sinking into an atmosphere and mist that is akin to an accidental Rothko painting.

Yet in essence, the only thing truly remarkable about these photographs is their artless insistence. In the words of Kessels: “Here’s to the finger fucker uppers, in all their bizarre and blurry glory.”

For more information or to order a copy visit kesselskramerpublishing.com