PICTURED #36: Andy Sewell, Something Like a Nest - a-n The Artists Information Company 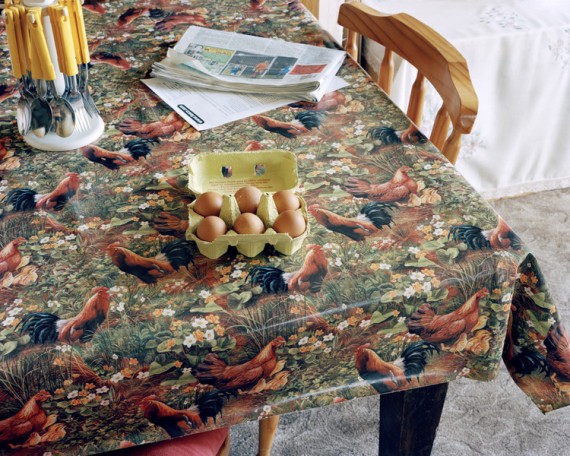 Andy Sewell is a conjurer of landscapes of the imagination. At first glance his records of pastoral England, in all their familiarity and strangeness, invoke both the longing for and collective desire to preserve it.

For The Heath, his first privately published photobook, the photographer set about depicting London’s manufactured pocket of wilderness north of the city, negotiating a terrain where contemporary life collides with bucolic conventions. Now comes Something Like a Nest, an evocative visual meditation that again offers mixed evidence of the social and economic impact on Britain’s countryside.

Cottages, enchanted woods, fields covered in frost, mucky pigs – these are just some of the straightforward, romantic conceptions of the idyll. But where the series becomes more nuanced and complex is in the inclusion of jarring scenes that perhaps exist outside popular imagination. Take aberrations such as 4×4 vehicles, semi-industrialised spaces, huge containers full of mountains of old supermarket bread, and we start to contemplate more deeply the contemporary English landscape.

Brimming with slow, acute observation are other photographs: a solitary jar of frogspawn, newborn piglets, boxes of eggs on a kitchen table covered in a plastic hen-and-chick patterned tablecloth. These images not only add details that casual observers of life’s rhythms might otherwise overlook but more specifically prompt us to question the source of such produce.

Yet such is the assurance of Sewell’s vision and strength of narrative quality – arranged around the changing of the seasons – that his images are seldom didactic. Instead, our perception roams freely, gradually absorbing the rich suggestiveness of the people, places and environments with which we are presented with. Something Like a Nest is every bit a clever, multi-layered look at our idealised idea of rural life and its communities, done with understatement and visual acuity.

For more information or to order a copy visit andysewell.com