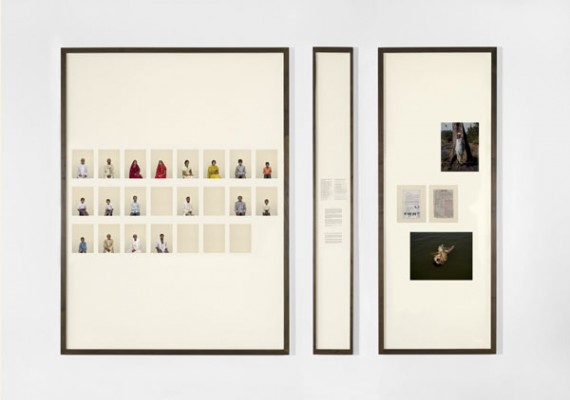 Photography is really just the last stop off point in the creative odyssey of Taryn Simon. The product of vast amounts of research, her work investigates big topics such as the production and dissemination of knowledge as well as the media’s assistance in creating complex and often contradictory meaning in the world. She examines this through her integrated use of photography, text and graphic design.

Tracing the evolution of her practice from 2002, this publication – released to coincide with her current exhibition Rear Views, A Star-forming Nebula, and the Office of Foreign Propaganda, at Jeu de Paume in Paris – pulls together the American artist’s key bodies of work to date. Simon first came to fame with her series, The Innocents, which through documentation attempted to unravel the stories of men who served time in prison for crimes that they did not commit.

With great acuity and intelligence, Simon made portraits at sites with special significance to these individuals: either the place where the men were arrested or misidentified, or the scene of the crime or alibi. The work questions both visual memory and photography’s inability to act as a credible eyewitness.

Since then, she has honed her own unique brand of conceptualism, applying photography as a formula more so than a form. As such, the book also includes her tremendous Contraband, Image Atlas, An American index of the Hidden and Unfamiliar and of course the highly-celebrated A Living Man Declared Dead and Other Chapters. The latter, searing in its study of bloodlines and their related stories, takes in everything from genocide victims in Bosnia and test rabbits infected with a lethal virus in Australia, to the first woman to hijack an aircraft.

Going deep into a subject but crucially shooting at a cool distance is characteristic of Simon’s approach. Also of importance is the space between images and associated text, where disorientation takes hold and ambiguity conquers the viewer. In a reflexive sense, her works provide a continual exploration of the processes of indexing, classifying and cataloguing subjects, born out of photography’s overriding impulse to create taxonomy.

For more information or to order a copy of Rear Views, A Star-forming Nebula, and the Office of Foreign Propaganda, visit jeudepaume.org