A Q&A with... Alex Hartley and Tom James, artists with a blueprint for the future - a-n The Artists Information Company 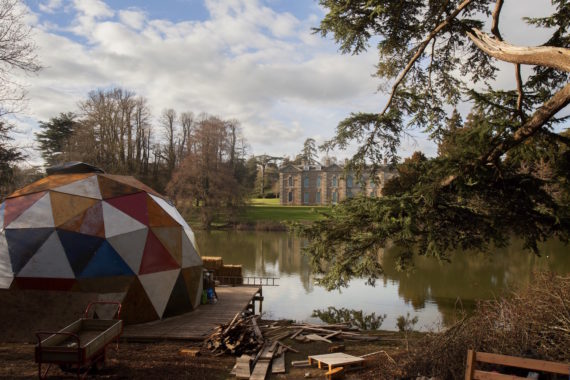 The Clearing is a project devised by artists Alex Hartley and Tom James for the Capability Brown-designed grounds of Compton Verney, an art gallery housed within a Georgian mansion in the Warwickshire countryside.

Consisting of a geodesic dome constructed from reclaimed materials, and accompanied by a wide range of public workshops, The Clearing is a project billed as a blueprint for living in the future.

It will be inhabited for the rest of the year by volunteer caretakers who will work to develop the site while living off-grid.

While playful and generous, the project engages with a range of political concerns – from labour and skills development, to ecology, history and social responsibility. This is the first time the artists have collaborated together.

Alex Hartley has exhibited across the UK and internationally in Denmark, USA, Japan, Spain and Sweden. He is perhaps best know for Nowhereisland (2004-12), which saw him declare a new nation on a tiny island revealed from within the melting ice of a retreating glacier in the high Arctic.

Tom James has exhibited at the Venice Biennale of Architecture and is a self-publisher as well as an artist. James is part of utopian regeneration agency Spacemakers. 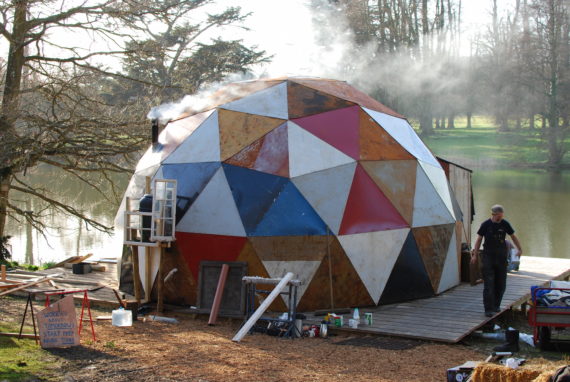 How did The Clearing come to Compton Verney?
AH: I had made and previously lived in a dome like this. I gave it to Occupy but I wanted to take it to other places. Compton Verney held a competition to make a new folly for their Capability Brown grounds and Tom and I made a proposal. I’m sure we won just because we are delivering so much with the structure, the occupations and the workshops. I like the contrast with the stately home – it’s this that gives it weight or resonance.

TJ: There’s a tendency with these sorts of projects to be stiff and straight but they need a sense of humour and the physical context lends it that. It responds to Brown’s ruined, partially useful structures like fake Roman theatres and ornamental ice houses. Compton Verney has one of the latter. We’re not pretending The Clearing is actually in the future.

There are various layers of history at play …
TJ: It calls back to communes like Drop City in the 1950s in America – one of the last times people tried to build utopias. But we know they don’t work!

Can you tell me more about the making of the structure?
AH: The idea was that we would make the dome entirely out of recycled materials but already that’s problematic because it’s more expensive and requires a lot of man hours. There were about six months’ worth of prep but we eventually had a huge material dump on site of things we sourced and donations. The internal cladding of the dome is made from crates that contained the nose cones of Jaguar aeroplanes and all the insulation is kids’ clothes. We were helped by artists, art teachers, architects, fashion designers and a boxer. People came for all different reasons. It was hard work but this variation was the reward of it too. 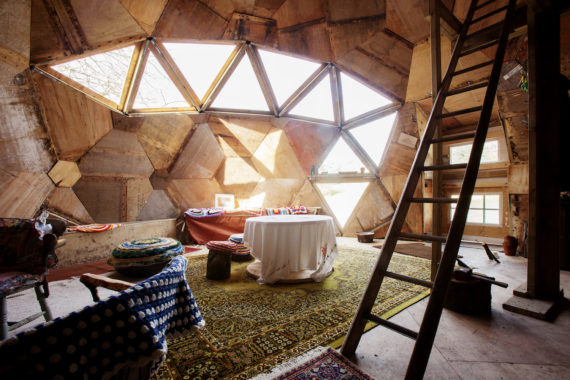 Tell me about the political dimensions of the project.
TJ: We’ve tried to create a place for people to come to learn how to live in the collapsing world that we think is coming our way. Climate change and other crises are happening and as a society we know we need to stop flying and buying Nespressos but we’re not. This is depressing, terrifying and also quite funny. It’s almost too big an issue. People understand it on an intellectual level but we wanted to give people the chance to feel what the future might feel like and prepare for it. The Clearing is half satirical and half deadly serious.

AH: This is the division of labour between Tom and I. Tom is fundamentally an optimist and I am fundamentally a pessimist. He is good with his people and I’m good with my hands. Nonetheless, we are both signed up to the idea that this is an experiment with how we might live. I’m interested in the openness of the project. Having it in the grounds of a stately home is already playing a political game.

How will it develop over the year?
AH: That’s the exciting thing – we don’t know. The bit that we’ve built isn’t really the work. The work is the occupation and what people bring to it. If you can step back and be generous with the work, let others take it on, the reward is really rich. The caretakers are not on holiday. They are meant to be doing stuff but that stuff is unspecified – they can build the site, write poetry, play music, and the site will accrue all that. It’s a tableaux lived in by the occupants and they are the work.

TJ: The caretaker’s job Monday to Saturday is to chop wood, feed the chickens, maintain the dome and keep the vision alive. They will interact with people that visit and they are not hosts in the traditional sense. Each interaction will be different and we want this. You are completely offline there and there is very little phone reception. I stayed there one night last week – it’s so dark and peaceful but it’s also really scary and visceral. The site will grow and change as the workshops progress on to chickens and wind turbines, for instance. We had an open call for the caretakers and had 160 applications with 40 slots – some volunteered on the build while others are total novices. 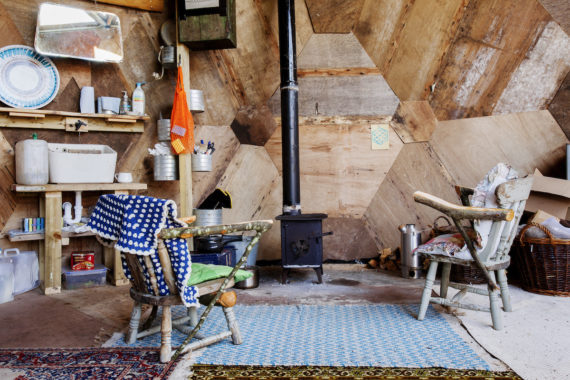 How will the activities be documented?
AH: They’ve been asked to record this themselves and write a report at the end of the stay. This will be part of the website and a book we will make at the project’s end.

Could you tell me more about the workshops you’re devising and delivering – making fire, making bread, making medicine – these are skills that are being lost.
TJ: They are based on Maslow’s hierarchy of needs – basic physiological needs, moving up to self-expression and self-actualisation. We are not pretending to be able to fully equip people but we do want to offer ways of survival once the sea levels have risen, society has collapsed and Sainsbury’s is on fire. The workshops range from simple survival skills through to more complex things like making mead, fizzy pop, radio and wind turbines, through to ‘high-culture’ sessions on how to build a democracy and how to read the stars.

The ideas come from a bleak place but when you learn skills with other people it’s really enjoyable. A big inspiration for me is Ursula K. Le Guin’s Always Coming Home (1985) – can you do something about this horrible future in a warm, soft and caring way? Is a world without Kim Kardashian, traffic jams and central heating such a nightmare or is it actually an opportunity to live in a slower, simpler way? It’s about re-thinking how we want to live and about communities.

The Clearing can be found at Compton Verney until 17 December 2017. A range of workshops are taking place during this period. www.comptonverney.org.uk 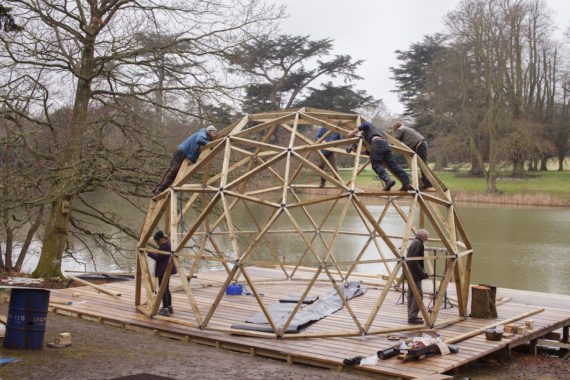 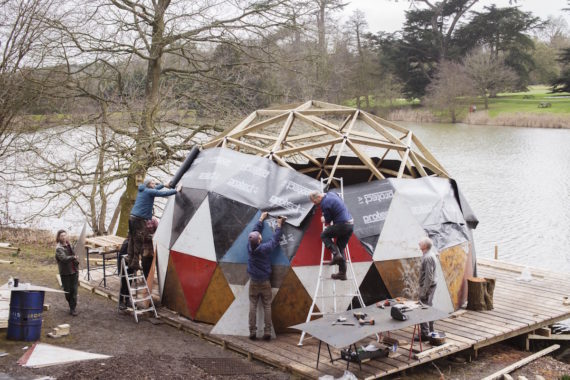 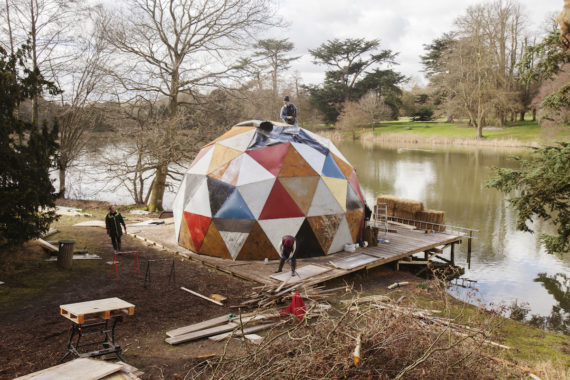