A Q&A with... Serena Korda, artist working with ceramics and sound - a-n The Artists Information Company 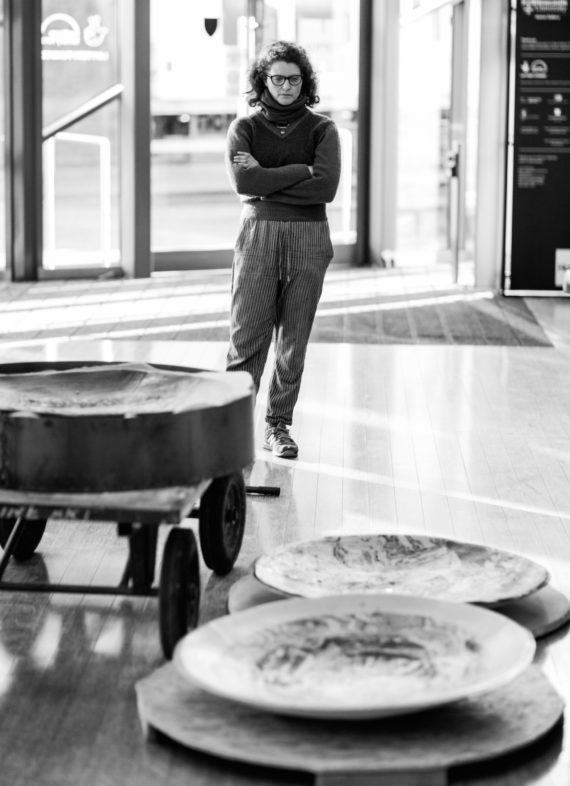 Born in 1979, artist Serena Korda lives and works in London, where she completed an MA in Printmaking at Royal College of Art in 2009.

Korda’s concepts often seem to investigate local myths and rites, and are reinterpreted for new audiences through her use of ceramics and other tactile and sensory materials.

Her 2011 Wellcome Collection commission, Laid To Rest, for the exhibition ‘Dirt: The Filthy Reality of Everyday Life’, consisted of the 500 bricks hand-made from donated dust and hair which were then buried after a ceremonial procession by marching band. For Aping the Beast (2013), a 15ft latex Godzilla puppet re-enacted (with volunteers) a 1940s aquatic stage show in Blackpool Tower.

For the past two years, Korda has been based in Newcastle as the Norma Lipman/Baltic Fellow in Ceramic Sculpture at Newcastle University. Her closing exhibition at Baltic, entitled ‘Missing Time’, references Sunderland’s pre-radar acoustic sound mirrors – in use until 1919 to detect enemy planes flying over the North-East coast – plus complex research into radio technologies, astrology, and mythology.

The artwork consists of several large, wall-based ceramic ‘portals’ with speakers, plus a sound piece made with acapella group Mouthful that plays with the harmonics of each dish. 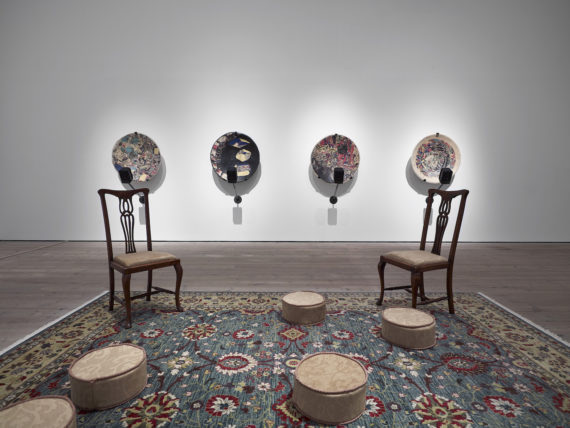 Your fellowship at Newcastle University is now coming to a close. Would it be fair to say that this residency has given you the time that you wanted to experiment and make mistakes?
Definitely. It’s been an amazing period of growth for me. Coming somewhere and being able to do whatever you want to do is a gift. Most of my time here has been about me doing what I might have got a musician to do for me in the past. Although I’ve had help, obviously, it’s been about me learning. To be fair to myself, I do this in every project: I want to learn. I think that’s the best way to do it – to learn through your work. It’s scary, but it makes exciting work. I think a lot about the ceramic technique of wabi-sabi, a life guiding principle and aesthetic approach, to embrace mistake and failure, see beauty in the imperfect, the broken and the aged. I do live by that in a weird way through my work. You will see in the Baltic show lots of fragments – of dishes that fail, that could be seen to fail. But you can look at them in a different way, as a wall of broken shards, an explosion in space. They surround the eight dishes that survived the process.

‘Missing Time’ has a lot of conceptual references to sacred spaces, portals, communication, and the healing power of sounds, ideas which thread between recent shows. The mushroom-shaped porcelain bells in your 2016 Glasgow International show allude to ‘thin places’, or anomalies in the landscape, which were thought to be doorways into the afterlife. These are currently on show at The Hepworth Wakefield, alongside new clay vessels that play music – described as ‘daughters of necessity’ in an accompanying archival essay. Could you tell me more about your research?
Sure. There’s a whole thing with planetary harmonics; I’ve been working with singers and a surround sound piece [for the Baltic show] that really utilises this notion of planets vibrating at a certain frequency. This notion was upheld during the Renaissance period, the idea of music of the spheres. They very much believed that these particular frequencies resonated with the human psyche. We know through our emotional responses to music that this is true. I’ve been working with the mathematical notion of very specific frequencies, and also with a sound healer from a new age perspective.

Plato writes about the eight spheres that rotate each other, and around this spindle called ‘necessity’. This relates to ‘The Daughters of Necessity’; it’s a reference to the daughters of Ananke, the goddess of necessity. Her daughters are in control of each sphere that rotate around her. The fact that there are eight of these dishes [in Baltic] now makes me think, wow, that’s a weird coincidence. Everything falls into place. The fact that they survived, the eight that I needed to conceptually understand the sound piece, is a guiding force. Wabi-sabi told me I only needed eight, anyway [laughs]. 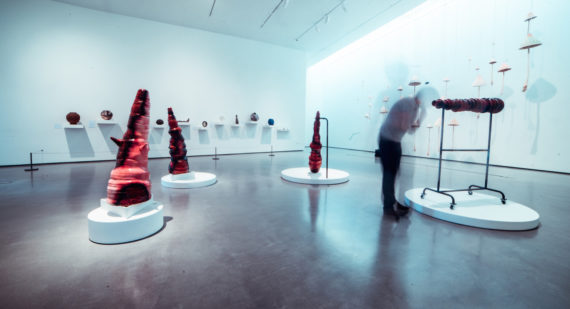 These large sculptures or ‘dishes’ that you have made for the Baltic exhibition – are they in direct reference to the sound mirror you visited in Sunderland?
A lot of the work came from a natural fascination with radio, the kind of symphony around us that we can’t plug into, because it’s below our sensory capabilities as human beings. I became interested in how I could make these invisible forces palpable. The sound mirrors became an aesthetic and visual concern in the work. They’re an archaic relic of the past. A lot of them had been abandoned up here and left derelict before their significance was realised. The one in Sunderland has been really nicely landscaped. They’re remnants of our sonic history.

The size of the mirror reflects the size of the sound wave it can pick up. Online, they just look like big, brutalist, concrete structures, but in person, you see how they’ve been weather-beaten and the striations in them looked like a map, or a planet. It just started a whole course of thought: the dishes that I made could be used as some kind of portal. Not only could the dish be used for this very important act, listening out for enemy planes, but it could also be seen as a way into another world.

How did you then progress into making the sound artwork? From ceramic listening object, into celestial communication device?
I’ve been really fascinated by Douglas Khan’s [theorist on sound, author of Wireless Imagination: Sound, Radio, and the Avant-garde (1992)] writing on signals and natural radio. I immediately saw radio as this thin place: it’s a form of communication, firstly; it’s ethereal in a way as it’s just coming through the ether and other things can hook onto it, in a mediumistic way like EVP [electronic voice phenomenon]. He talks about radio being able to lull you into a sense of safety as you go to sleep whilst also having the power to send off a missile. 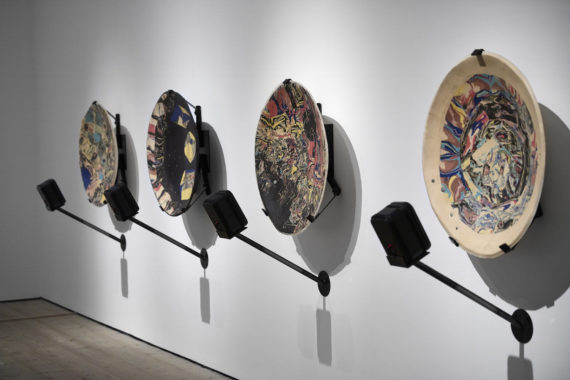 The first idea was to have people wearing portable radios in the gallery. So the first one I made was from a NASA project called Radio Jove, which is about picking up sounds from Jupiter. I thought it’d be a great place to start – it’s like an Airfix radio astronomy kit, you can buy bits from B&Q, then they send a kit of 100 electrical components for you to put together following detailed instructions. I found it was both difficult to put together and would be difficult to use on a regular basis. I thought a portable radio would be much better, found a blueprint online, and made that – it’s like a tiny handheld box with a metre-and-half-long antenna, and buttons that allow you to filter the sound (VLF receivers). It picks up natural radio.

What you hear is this crackling – not quite how you’d expect space to sound. But because I’ve been working with astrophysicist Andrew Fletcher recently [Senior Lecturer in Applied Mathematics at Newcastle University], when he hears this kind of interference he says: “That’s the sound of our galaxy, Serena: you’re listening to our galaxy right now.” It opens your mind up to something you can feel disconnected from; the mammoth-ness of the universe, this sense of infinity.

They are, in a sense, acoustic objects. How do you want the visitors to experience the work?
I suppose there’s a concern for me now about making work with care in it. Care of making, but also care for the viewer. How are they going to interact with it? It’s almost like a space opera; you can sit in there for an hour and experience the whole piece if you want to. But equally you might just get a moment of call and response, Babylonian words, names of stars and astrological signs, taking it back to an ancient period where we were more connected to the cosmos. Within everything I’m doing at the moment, I’m trying to align a relationship between reason and the imagination, science and spirituality.

‘Missing Time’ continues at Baltic, Gateshead until 6 May 2018; ‘Daughters of Necessity: Serena Korda & Wakefield’s Ceramics’ is at The Hepworth Wakefield until 5 July 2018 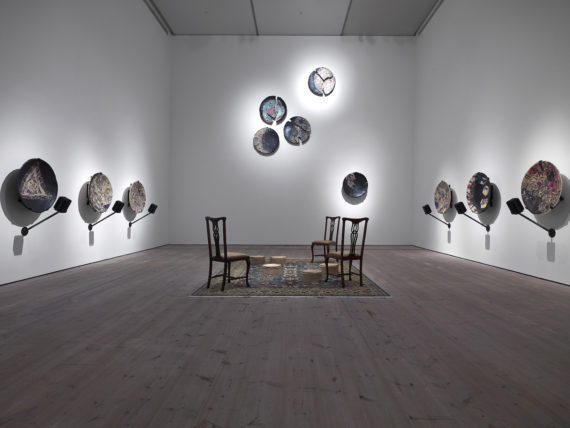 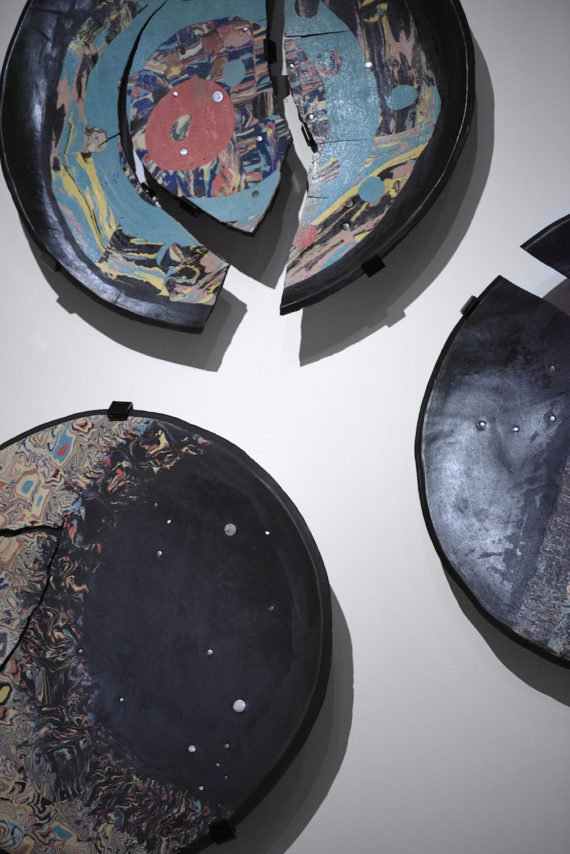 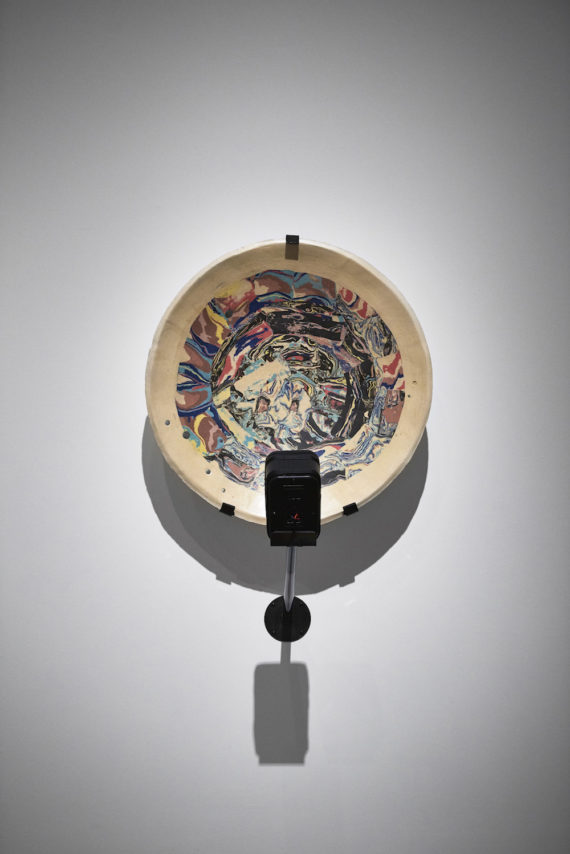