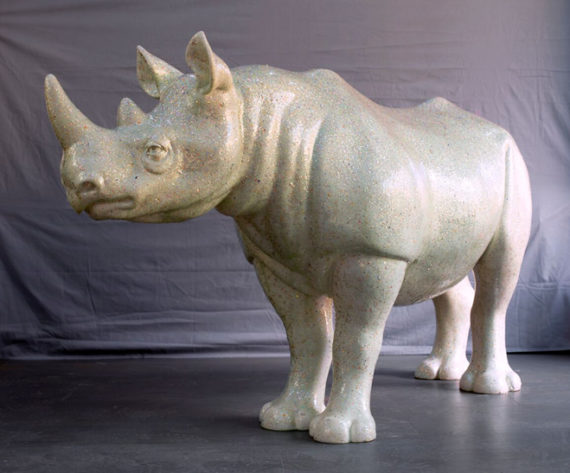 Rhino sculptures by artists including Mark Quinn and the Chapman Brothers go on display across London The works are part of the ‘Tusk Rhino Trail‘ which is aiming to draw attention to the threat the animals are facing from poaching. Other artists taking part include Nick Gentry, Gavin Turk, Eileen Cooper and Rolling Stones guitarist Ronnie Wood. In total 21 rhinos can be found at various locations across the city.

Mark Quinn‘s sculpture is an extension of his ongoing Flesh Paintings series, with the rhino wrapped in images of flesh. Meanwhile, Nick Gentry‘s sculpture Save is covered in paint made from 500 recycled CDs donated by members of the public. The plastic was shattered into tiny fragments and then recombined to produce the material.

Explaining the importance of the exhibition, Gentry commented: “The rapid expansion of the human population is having a devastating impact on the natural world. Let’s empower ourselves to instead live as one, with respect and empathy for all life forms.”

The Chapman Brothers‘ piece features a graphic image of a dead rhino. They commented: “It is a very sad state of affairs that charities appeal to idiots like us to present the appalling truth of the butchering of endangered species, so that rich people can donate money to hopefully stop the practise.

“If you are a rich person reading this you are obliged to put your hand into your very deep pockets, not least because governments have failed, but because the poaching of rhinos is mostly due to the fetish-istic idiocy of misguided superstitious people, robbing us, and future generations, of the prehistoric beauty that is the black rhino.”

A-level data reveals further decline in entries for arts subjects The Association of School and College Leaders (ASCL) has warned that entries for subjects including art and design, design and technology, drama, media studies, music and performing and expressive arts, are down 4.6%, compared to a fall of 2.0% 12 months ago.

Deborah Annetts, chief executive of the Incorporated Society of Musicians, said: “With the Department for Education determined to pursue the EBacc despite evidence clearly demonstrating how damaging it has been to creative subjects, this trend is only likely to get worse. We urge the government to urgently rethink their EBacc policy, which must be abolished to preserve access to a creative education in schools.”

Geoff Barton, general secretary of the ASCL, added: “The immediate solution is for the government to stop treating the 16-18 sector like the poor relation of education and improve the level of funding as a matter of urgency. In the longer term we need to boost these subjects at GCSE where they are also under pressure.”

Chancellor Carol Folt and other UNC-system officials have issued a statement on Silent Sam, citing that they will “never condone mob actions”: https://t.co/2PogRagTDI

Confederate statue pulled down by group of 250 protesters at University of North Carolina The monument, known as Silent Sam, was originally funded by the Daughters of the Confederacy to commemorate students from the university who had left to fight as Confederate soldiers in the American Civil War.

However, it has now been hauled off its platform by a group of students, faculty, and local residents using rope. They were acting in solidarity with doctoral student Maya Little, who is facing a criminal trial for covering Silent Sam in red paint and her own blood earlier this year.

Trump proposes 25% tariff on Chinese art The proposed tax would affect around $200 billion worth of Chinese goods, including paintings, sculpture, collage, ceramics, and antiques. It would also mark the end of the United States’ long-standing policy allowing art to be imported duty-free.

Critics of the proposals have claimed that they will damage the ability of small business in the art and antiquities trade to import Chinese art from third countries. They have also argued that it will be even more difficult for collectors and museums to acquire such art.

The proposed tariff was originally 10%, but the increase is due to president Trump’s rising frustrations with China’s trade practices. In response, China is imposing its own $34 million tariffs on American goods.

Public hearings into Trump’s proposals began this week, with the tariffs expected to take effect next month.

Berlin Wall set to be resurrected – and then demolished – as part of performance at Berliner Festspiele If given the go ahead, the fake wall will be installed on the Unter den Linden boulevard from the anniversary of reunification on 3 October to 9 November. It will then be destroyed.

It is rumoured to be part of an ongoing film and performance project based on the life of the Soviet physicist Lev Landau by the Russian director Ilya Khrzhanovsky.

A spokeswoman for Berliner Festspiele told the Art Newspaper: “We cannot confirm the project. A press conference announcing more details will be held shortly.”