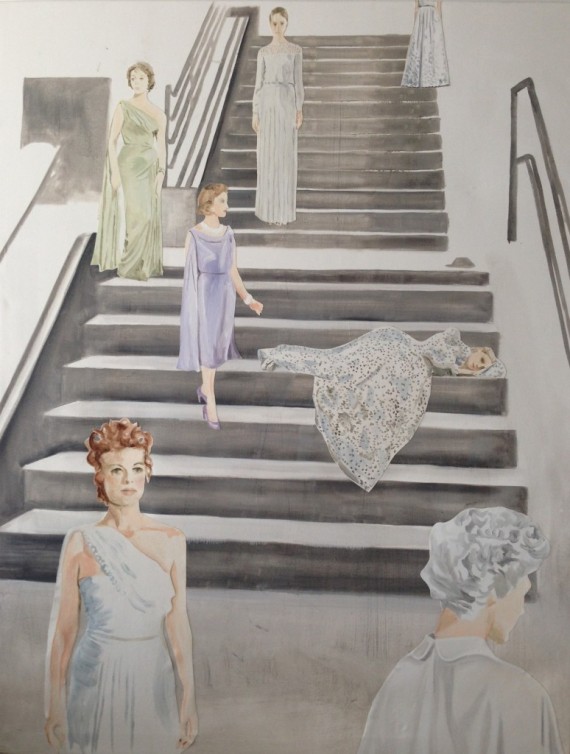 “I really like the idea of being thrown together with people who I don’t know… that idea of the chance encounter. And I like that idea that we developed this little network of our own because we had this shared experience. The show is a way for us to stay connected.”

Cathy Lomax is discussing her recent residency at the British School at Rome (BSR) and the exhibition she has curated as a result. Opening at Transition Gallery, London – a space she runs with artists Alex Michon and Alli Sharma – Roman Remains includes Lomax’s own works alongside those of Ursula Burke, Archie Franks, Daniele Genadry, Mason Kimber and Annika Koops. All the artists were residency holders at the school during the same period last year.

Supported by the Abbey Fellowship in Painting, a three-month bursary for mid-career artists, Lomax undertook her residency between April-June. “I’d heard about the British School at Rome – a few people I know have done residencies there – and it always sounded very romantic,” she says. “It has a slightly old-fashioned feel about it that I was quite attracted to.”

The school, which was founded in 1901, offers artists, historians and architects the chance to ‘focus on their work away from normal pressures’ over an extended period. Alongside the Abbey Awards, which support three residencies for mid-career painters and one for an artist at the start of their career, there are awards aimed at sculptors, a fellowship for an artist working in any discipline, and awards for Irish and Australian artists, all supported by different funding bodies.

A place of research

Residencies at BSR are as much about enabling artists to have time and space to carry out research as they are about producing new work, as Lomax explains.

“Although it is called the British School at Rome, there isn’t much of a school aspect to it – it’s more of a place to research,” she says. “It has a fine art coordinator who you can ask advice from and he will help you source materials, but there’s no actual structured teaching or tutorials. You are very much left to your own devices to do whatever you’ve decided you want to do. There’s no pressure to make work while you are there, which is good.”

Having initially proposed to undertake research based on her ongoing film diary series of paintings that records an image from every film she watches, Lomax realised her idea of “looking at Rome through the films that have been made there – the impression you might get of the city through watching films” was far too broad a subject.

So, inspired by one film in particular – The Roman Spring of Mrs Stone, about an American woman who moves to Rome and initially discovers a great sense of ‘away-from-home’ freedom that is ultimately overshadowed by a growing sense of alienation – Lomax started to think about her own place in the city: “It can quite alienating because you’re not a resident and you are not quite a tourist,” she says.

Eventually, she created a series of paintings featuring women associated with Rome – some from films, others from the classical sculptures she discovered during her research.

Archie Franks, who was a recipient of the 12-month Sainsbury Scholarship in Painting and Sculpture between October 2013 – September 2014, says it was time and space away from other distractions that attracted him to the residencies. “You can just get on with your work and everything else is taken care of,” he explains.

“You get a gorgeous, spacious studio that’s filled with light, and there is plenty of intellectual and artistic stimulus. But you are also removed – at least temporarily – from the competitive metropolis of London.”

This idea of a creative and intellectual community was also important to Ursula Burke. She was Arts Council of Northern Ireland, BSR Fellowship holder, January – June 2014.

“There is a vibrant sense of a creative community or extended family; you are working and living side-by-side with artists and academics from all over the world,” she says.

She also notes that, because residency artists are provided with three meals a day in the school’s refectory and living quarters are cleaned and maintained, more time can be dedicated to research and studio work. “You can be immersed in your practice full time, away from any distractions, pressures and responsibilities of everyday life. An opportunity like this is rare.”

Burke says the residency gave her a chance to research how artists such as Bernini, Canova and Corradini captured ‘movement’ in their marble sculptures, while also exploring the colour palettes of renaissance and baroque fresco painters. “It had a huge impact on my work both formally and stylistically,” she says.

For the exhibition Roman Remains, she is exhibiting three porcelain sculptures – one made before, one during and one after the residency – that show the development of her works as a result of this research. “I have developed a range of particular gothic, renaissance and baroque colour palettes that I embed in my own sculptures using colour pigments which stain the porcelain,” she explains.

Lomax says she hopes the exhibition will highlight both formal developments, such as those made by Burke, as well as more subjective influences that the residencies have on artists’ work.

“The title, Roman Remains, embodies the idea of Rome as a centre of history as well as suggesting that we are showing the traces of something,” she says. “Those traces being the thoughts, experiences and ideas that we gathered together during our time in Rome that still remain with us.”

Her own work for the exhibition is part of a series featuring women descending staircases – a reference to the number of steps she encountered in the city famous for its hills, but also a metaphor for that disconnect one can feel when neither a tourist or a resident.

“While you are there you try and force it a little bit – you think ‘I’ve got to make work about this’ and it becomes this pressure. But when you’ve left you can look back over things and the influences come in to your work more naturally.

“It will be interesting to see how it has worked for the other artists in the show… if that Rome influence is still there or if their work has changed.”