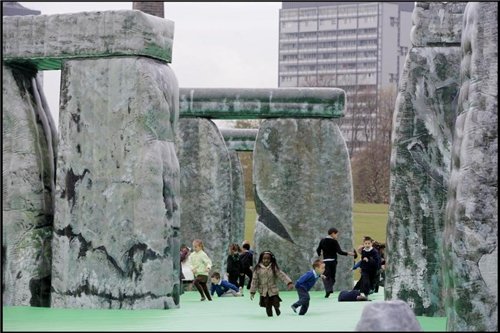 Jeremy Deller’s Sacrilege, the inflatable life-size replica of the prehistoric monument Stonehenge, only works if you jump on it. When it comes to engaging the public, artworks that invite us to touch and to play on them are often the most successful. A point well illustrated by Carsten Holler’s 2006 Turbine hall commission Test Site, often mooted as people’s favourite in the series.

Sacrilege launched at the Glasgow International Festival of Visual Art this spring and pops up in various locations around the UK over the summer. While GI’s programme long ago earned the critical acclaim of the contemporary art world, launching Sacrilege this year meant that the people of Glasgow and our London-centric media could no longer ignore it. Images of kids bouncing around in Glasgow’s poverty stricken east end amidst blue skies and sunshine went viral on Facebook, Twitter and in most of the national newspapers. But as it was co-commissioned by the Mayor of London it was inevitable that it would bounce its way down to London in time for The Games. It is interesting that amidst so much focus on Legacy (with a capital L), an artwork designed to be temporary might end up being the most talked about commission of London 2012.

Many of Britain’s artists, critics and professionals are sceptical about the Olympics and the changes it has imposed on East London, and many folk in the UK are sceptical about public art and what it means to them. The term brings to mind something bronze plopped into our new towns or in the middle of our roundabouts. Much of the public art which has come out of the Olympic bid adheres to this thoughtless plonking, but not all of it. The most successful public art projects born as a result of London 2012 include our very own Contemporary Art Society curated commissions by artists Clare Woods and DJ Simpson for the Olympic Park, celebrating the history of the place and the artists it has nurtured. Many of the other great artworks have been temporary, including those that developed out of Neville Gabie’s time as artist in residence at the Olympic Park, oscillating between poignant odes to the on-site workers to hilarious insights into the absurdity of it all.

It is no coincidence that some of the most meaningful projects are temporary, with their focus firmly set on people and place. There is increasing patronage for socially engaged art, with organisations such as ixia, Artangel and Creative Time in New York extolling the virtues of integrated projects which promote inclusivity and artists working with communities. This can raise the concern that socially minded projects still struggle to engage the hardest to reach audiences through well-meaning art works.

But there are many shining beacons that show us how we can actually change lives through art projects. By the time you read this, winner of the Create 2012 award Ruth Ewan will have taken 250 young people from East London to the Savoy Hotel in an acknowledgement of the fact that the Savoy Palace was the first place to be burned down in the Peasants’ Revolt of 1381. An empowering project to counter the reputation of East London’s teenagers as rioters, this was once in a lifetime opportunity for these young people to take over the Savoy’s ballroom. They ate a feast they created with chefs at the Savoy and watched a concert they had organised featuring British rapper Lethal Bizzle.

A big mistake in commissioning public art is the tendency towards ego-driven commissions where an artist’s name means more than the creation of an eloquent artwork with connection to place and people. Sacrilege is a mixture of the two. Given his status as an up-and-coming national treasure and following his major retrospective Joy in People at the Hayward earlier this year, a work by Jeremy Deller for London 2012 is a sure-fire way to get press coverage and tick all the right boxes for social engagement, inclusivity and participation. But this is also where Deller gets it right. Through creating an artwork that people can have a playful response to whilst engaging with British history he is instilling real joy in people, because who doesn’t like bouncing on a bouncy castle?

a-n Collection: Playing up On the nature of collaborative and creative processes involved in making artwork in the public realm, from March 2007. Read on