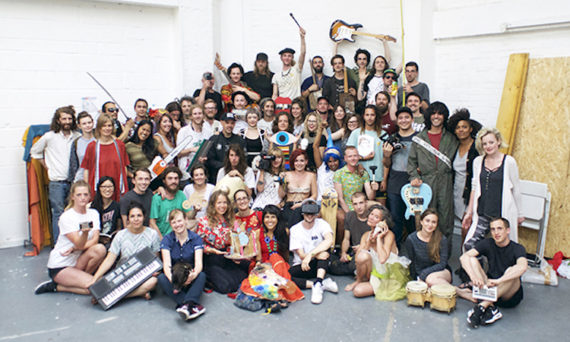 A new petition set up by artists based in Hackney Wick, London, is calling on the London Legacy Development Corporation to stop development work that will result in the demolition of their studios.

The group, who are based at Vittoria Wharf close to the Olympic Park, are made up of over 100 artists who fill the conglomeration of warehouses, studios and small businesses. Over 2,800 people have already signed up to the petition, which has a target of 5,000.

In a statement posted on its Change.org page, Save Hackney Wick said: “On 5 September work is set to begin on the site to make way for a pedestrian footbridge across the canal. This bridge is part of LLDC’s development plan that includes building many unaffordable homes on the adjacent side of the canal.

“They have explained to us that building the bridge will benefit the community. Our response is that we are the community and you will be deleting us in the process.

“If we can stop the building of this bridge and have a productive dialogue with LLDC, who are supposed to work in the interests of the community, there is a chance the process of continued growth will be put in the hands of the people that it actually benefits.”

The group are claiming surrounding residents have shown almost unanimous opposition to the development, something that flies in the face of London Mayor Sadiq Khan’s recent statement that: “In my view regeneration should only occur when it has the full support of local residents.”

For many years Hackney Wick has been seen as a hotbed of creative activity with numerous high-profile names taking up residence there. The Chapman Brothers, Gavin Turk and Conrad Shawcross have all held studios in the area, yet the threat to Vittoria Wharf is not isolated. London is due to lose 3,500 artist studios in the next five years – a third of the capital’s creative workspaces.

Responding to the petition, a spokesperson for LLDC told the Art Newspaper: “This new bridge will significantly improve connections around Fish Island, Hackney Wick and into Queen Elizabeth Olympic Park, helping the area properly benefit from the regeneration investment being made there.

“This bridge received planning consent in 2012 and we have undertaken extensive consultation on these proposals. We are keen to work with local people to ensure the bridge benefits everyone.”

More information about the campaign at www.savehackneywick.org