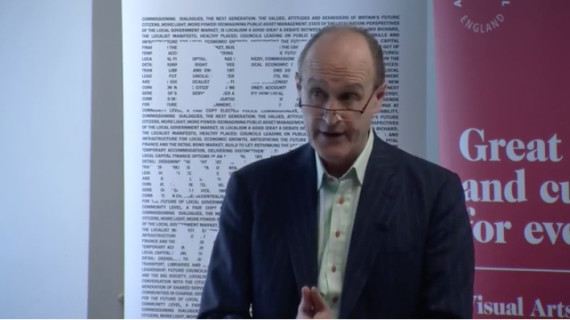 Arts Council England chair Sir Peter Bazalgette has urged local authorities to “find a way to keep faith with arts and culture” in a speech yesterday at the New Local Government Network Hub in London.

Bazalgette was launching a new report, Funding Arts and Culture in an Age of Austerity, produced by ACE in conjunction with the New Local Government Network. The report highlights the reduction in local authority funding of the arts and culture in England – since 2010, it has dropped by £236 million, a decline of 17%. In London, the drop in funding is higher at 19%.

Acknowledging the pressures local authorities are facing due to continuing cuts from Westminster, Bazalgette described council budgets as being “under unprecedented pressure”. He described the museums sector, which is seeing the imminent closure of many local authority-run venues, as at the “sharp end” of the cuts.

He continued: “In some areas significant cuts are being made to museums, libraries and the arts. We know that local authorities will be asked to find even more substantial savings in the years to come. It’s the biggest challenge arts and culture face at the moment.”

Amid the gloom, Bazalgette talked positively about the settlement for national arts funding in the autumn statement and said that the recent launch of the government’s white paper for culture “reaffirms the importance of local authority funding in the national arts ecology”.

Aiming his message at local authorities across England, he called for a collaborative response to central government’s austerity agenda. “We know you are under pressure,” he said. “Let’s work together to develop new, creative and innovative solutions to sustain the vital cultural life of our communities. We’re in, if you’re in.”

Bazalgette used his speech to talk up the way some local authorities are already replacing lost central government funding by partnerships with higher education institutions and by implementing new procurement processes.

While making it clear that “the Arts Council cannot replace all the funding lost from local authorities”, he stated that ACE is working with over 240 local authorities to help them support arts and culture in their area.

He added: “When you add up the annual, national and local government spend on arts, museums and libraries, it comes to £3 billion. This is, of course, a substantial investment. But, as we’ve seen, the bit that’s really looking challenged is the contribution of local authorities.

“While the Arts Council cannot change the economics of local government or bridge the funding gaps, we can, as a national development agency, use our own relationships to broker new partnerships. We can focus specific funding on particular areas of need; we can invest in the best ideas. We can get the message out there that there are ways forward that can make a difference.”

“Historically, 60% of Lottery funding was distributed outside London, and 40% within the capital. In 2015 this had shifted to 70% outside London and 30% inside. And in the next two years, we’re promising to push this to 75% and 25%. We are committed to continuing this trend with our Grant in Aid funding where currently 60% is invested outside the capital.”

Culture white paper: Not bold, not new, but workable