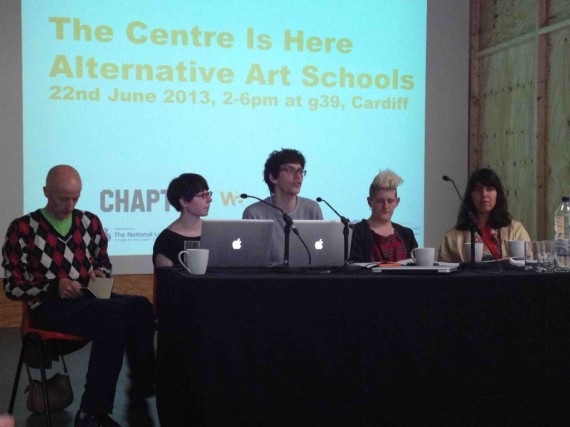 It was with slight trepidation that I attended The Centre is Here symposium about alternative art schools, at Cardiff’s g39. I am, after all, leaving Cardiff in September to embark on an MFA at Glasgow School of Art. Had I considered all the other options? Would the presentations by Pippa Koszerek (The Independent Art School), Maurice Carlin (Islington Mill Art Academy) and The School of the Damned cast a shadow over my decision to return to art school?

First to present their ideas was Independent Art School founder Koszerek. The school became a curatorial project after she and fellow course mates created The New Hull Art School as a protest against the implementation of modularity on the course structure of fine art degrees.

Championing a free and progressive approach to education, they set up talks, crits, performances and presentations. Koszerek’s powerpoint for this event included a series of drawings that humorously illustrated her point. A woman with a large rock on her back accompanied her statement: ‘There were problems with being perceived as opposing a system, people would make assumptions about my political standpoint: I was seen as being a Marxist, anarchist, or anti establishment. This is a weighty responsibility that is imposed on your making process.’

As a result of being questioned about her integrity, Koszerek went on to do an MA in order to research groups who were actively seeking a student-led experience. She met Department 21, who adopted a cross-disciplinary approach within the RCA and broke barriers between the rigid, separate courses by having a communal studio for printmakers, sculptors and painters. Her experience supports the main argument of her presentation – that we should fight for alternatives within the current art school system.

The School of The Damned offered a counterpoint to working from within the established system. They are a London-based group of artists who have fully embraced the DIY approach to education. After graduating, 15 friends decided to create their own MA as a protest against high fees, being unable to get on a course, and the need to be accepted by art schools in the first place. They forcefully borrow the term MA in order to copy structures set in place by traditional art schools, describing themselves as ‘an underground Fine Art MA course run by its students.’

Set up in late 2012, The School of the Damned has a timetable and a meeting place and pays lecturers in kind through offering their skill sets, such as gardening or web design. Both Sara Nunes Fernades and Rachel Haines from the school used forceful language when explaining their ethos, describing themselves as being “criminalised” for not getting on/affording an MA. This sat uncomfortably with borrowed educational terms such as ‘degree shows’, ‘lecturers’ and ‘course’.

Although the energy, commitment and enthusiasm the ‘students’ have for their new vocation and ‘school’ is commendable, it was hard to see what actually makes it a school; it seemed more like the dressing up or rebranding of an art collective.

Maurice Carlin of The Islington Mill Art Academy, Salford, offered a more organic alternative to institutional art education. He explained that after doing a foundation and feeling deflated by the BA options, he opted – along with a large group of other foundation students – to create an academy that would gain practical knowledge for its students by exhibiting work and taking part in international art projects.

This revolutionary approach to seeking out opportunities and receiving on the job experience had echoes of Koszerek’s determination to champion freedom and student-centred experiences. The Art Academy is not an accredited course, but it could be argued that, as a result of its proactive ethos, students have much more depth in their approach to their own work and exhibiting than the average BA graduate.

I had one burning question for the panel: Where is the room for the individual, and fostering an individual practice, when their alternative schools are so collectively driven? There were three very different responses: The School of the Damned explained that focusing on their own work wasn’t an issue; Carlin has found that the academy has influenced the type of work he makes as he focuses on ideas about collectives and the public. Koszerek, meanwhile, clearly makes the distinction that The Independent Art School is a curatorial project rather than a collective.

As I prepare to return to art school I am looking forward to focusing on aspects of my practice and having the critical response of fellow students and lecturers. And I intend to take on board some of the panel’s points: I will endeavour to be an active part of a community; I will make an act of protest by accepting my place at art school, ensuring that it’s not only the rich that study at MA level; and, if need be, I will fight for alternatives from within.

The Centre is Here: Alternative Art Schools took place on 22 June at g39, Cardiff, and was organised by g39/Warp and Chapter.