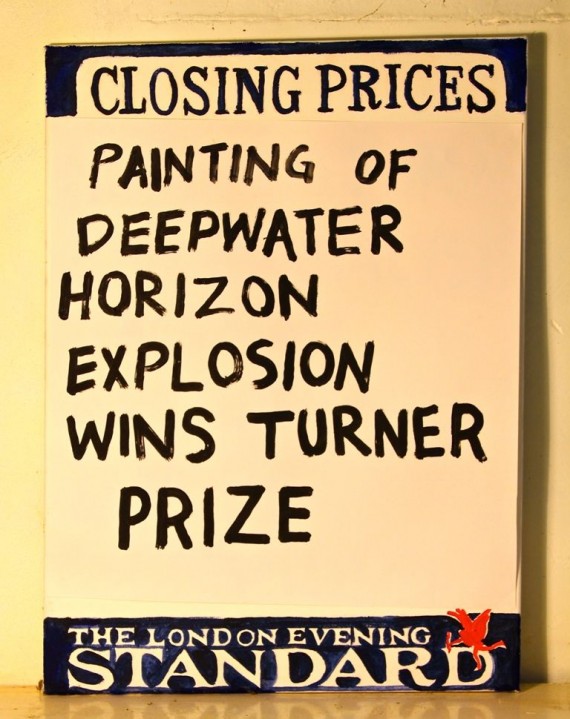 Tate’s sponsorship deal with BP came under renewed scrutiny at the organisation’s AGM on Friday when the chair of Tate’s Members Council, the Channel 4 journalist and broadcaster Jon Snow, was presented with a limited edition print of Conrad Atkinson’s The Oil Ship.

The artwork, created as a special fundraising edition to support Liberate Tate‘s campaigning activities, was presented by Tate member Mel Evans, who requested the work be displayed in one of Tate’s members’ rooms. “It is on display,” responded Snow.

The intervention was one of several contributions by Tate members who questioned Tate’s responses to a recent Information Tribunal inquiry regarding specific disclosures relating to its sponsorship deal with BP.

“Tate refuses to disclose exactly how much BP gives, as well as how exactly the decision was taken to accept this sponsorship,” said Tate member Lena Cohen.

“Tate’s head of legal Richard Aydon argued in court that ‘protests might intensify’ if information was to be revealed. This is like saying, ‘this information will make people so angry that they will get dangerous’. That’s no justification for secrecy. We as members contribute to Tate ten times more than BP.”

Evans added that Atkinson’s piece was “a reminder of art’s role in creating the future we need – a future without oil”.

After receiving the artwork, Snow went on to assure members that there would be more opportunities for them to be involved in Tate’s governance over the coming years.

When asked whether it would be possible for the Members Council to bring an elected member onto Tate’s Ethics Committee, Snow stated that the council would consider this.

“It’s incredibly difficult to raise money for the arts, especially in today’s economic climate,” said member Tony Williams. “But Tate’s current position – i.e, that we don’t take money from tobacco companies, we don’t take it from arms dealers, but we do from fossil fuel companies – has become outdated.”

In his introduction to the AGM, Tate director Sir Nicholas Serota broached the topic of BP sponsorship concerns and announced that Tate Trustees would review the agreement in 2016.