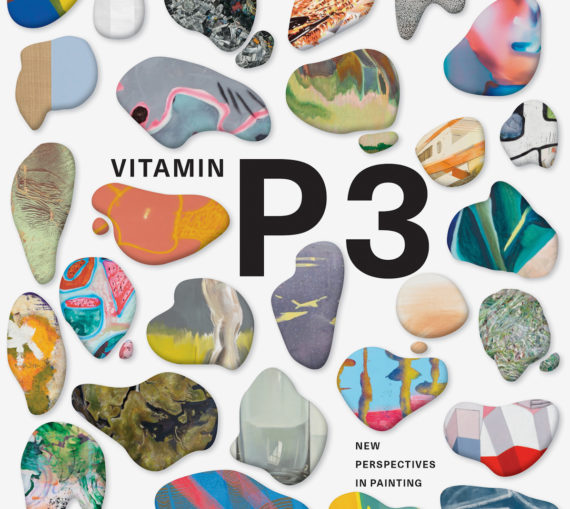 1. Vitamin P3: New Perspectives in Painting (Phaidon)
Number three in a Phaidon series that began in 2002, this latest edition is edited by Tom Melick and Rebecca Morrill and features over 100 artists across its 350-plus pages. Combining slickly minimal design and compelling (of course!) imagery, it’s a coffee table book that is both visually dynamic and intellectually stimulating. With a scene-setting text by Barry Schwabsky (who also introduced the first two books), plus contributions from another 35 writers and curators, this is a covetable tome for anyone interested in the ever-evolving world of contemporary painting. Featured artists include: Ella Kruglyanskaya, Nicolas Party, Rose Wylie, Imran Qureshi, Narbi Price, Laura Lancaster and Yelena Popova.
uk.phaidon.com

2. My Life as a Work of Art: The Art World from Start to Finish (Laurence King)
Writers Ben Eastham and Katya Tylevich set out their take on contemporary art in this soberly presented, sparkily written book. Profiling eight works by nine artists, including Martin Creed’s The Lights Going On and Off, Camille Henrot’s Gross Fatigue, and Philippe Parreno and Pierre Huyghe’s No Ghost Just a Shell, this collection of essays sees the writers attempting to get to the heart of the artists’ process, while at the same time exploring the wider context of the art market, gallerists and their relationship with public museums. Deeply researched and entertainingly written, this is an art book that is all about the words – images of works are minimal and in black and white – with other featured artists including Michael Borremans, Barry McGee, and Erwin Wurm. A great read.
www.laurenceking.com 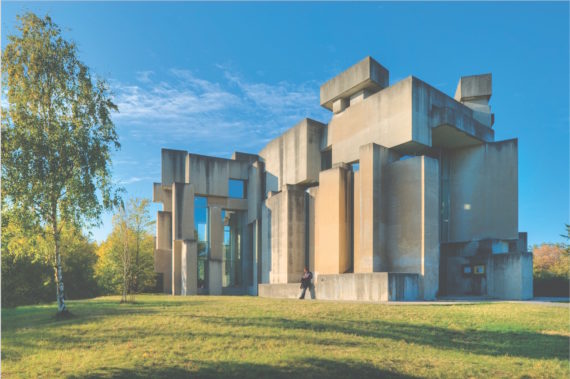 3. Concrete Concept: Christopher Beanland (Frances Lincoln)
Assemble/Simon Terrill’s Brutalist Playground; NVA’s Hinterland; S1 Artspace’s proposed move to Park Hill – the much maligned architectural style of brutalism has been enjoying a positive reappraisal of late. This fast-paced tour of 50 of the world’s ‘brutalist beasts’ – from Le Corbusier’s Unité d’Habitation in Marseille to New York’s Met Breur, via Preston Bus Station, Birmingham New Street Signal Box and the aforementioned Park Hill – may get filed under ‘architecture’ rather than ‘art’, but in fact many of these structures look more like abstract sculpture than boring old buildings. A highly entertaining read that brims with wit and enthusiasm, Concrete Concept celebrates the imposing forms and uncompromising aesthetic of brutalism, highlighting the sledgehammer beauty of these (mostly) grey monuments to a flawed but forward-thinking age.
www.quartoknows.com

4. At Twilight: Simon Starling (Common Guild/The Japan Society)
Stemming from the exhibition of the same name earlier this year at Glasgow’s Common Guild – which in turn featured masks and costumes used in the theatrical performance, At Twilight: A Play For Two Actors, Three Musicians, One Dancer, Eight Masks (and a Donkey Costume) – this is a publication in two parts, with a tabloid-sized newsprint section and a slim but robust hardback book. The latter includes the full script of the play, presented in Glasgow in late summer and drawing on WB Yeats’ At The Hawk’s Well’. Yeats’ original play was inspired by traditional Japanese Noh theatre and Irish folklore and was written as the first world war raged. At Twilight reflects on this transitionary moment in time, tapping into the era’s modernist anxiety with a cast of characters including Ezra Pound, Jacob Epstein and the art-loving socialite Nancy Cunard. Beautifully produced and historically fascinating, the hardback in particular is a delightful example of top quality, small-run art book publishing.
www.thecommonguild.org.uk 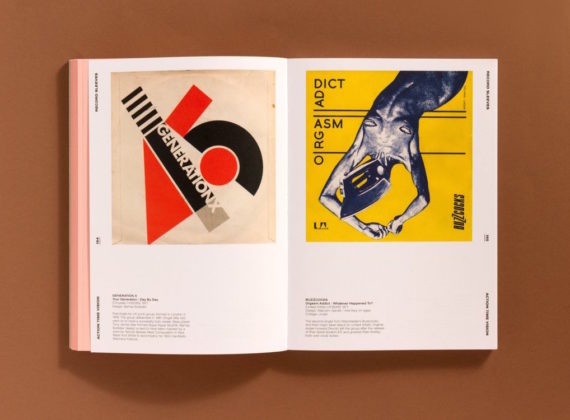 5. Action Time Vision: Punk & Post-Punk 7″ Record Sleeves (Unit Editions)
From the ever-reliable Unit Editions – publishers of ‘books for an international audience of designers, design students and followers of visual culture’ – this 320-page design odyssey features covers from the record collections of Unit Editions co-founder Tony Brook, and ‘punk scholar’ Russ Bestley. Focusing on the DIY design/art explosion that accompanied the birth of punk and post-punk in the late 1970s/early 1980s, it includes interviews with Mute records founder Daniel Miller, Sniffin’ Glue fanzine editor and musician Mark Perry, and the designer Malcolm Garrett, who famously featured Linder Sterling’s memorable collage on the cover of Buzzcocks’ single, Orgasm Addict. Most interestingly, it explores the way that the ‘anyone can play guitar’ attitude of the music was also reflected in the visual aesthetic of these 7-inch-square design statements.
www.uniteditions.com

6. Professional Practice: 20 Questions (Q-Art)
As the cost of further education becomes ever-more expensive, this 400-plus page book explores the vital question of how – if at all – fine art undergraduates are prepared for life after graduation by the institutions they study at. Over 75 undergraduate fine art staff were interviewed for the book, representing 22 universities across the UK. Questions include: ‘How are students prepared for life after their course and what are they being prepared for?’; ‘What is professional practice in the context of undergraduate fine art education?’; and ‘How important is location in shaping an institution’s approach?’ The responses are varied and wide-ranging in a publication that provides plenty of educational food for thought. (For more on the subject, read the research paper by Q-Art’s Sarah Rowles, published at a-n Resources.)
q-art.org.uk

7. What They Didn’t Teach You in Art School: Rosalind Davis and Annabel Tilley (Octopus Books)
A comprehensive introduction to how to survive and succeed as an artist, artist-curators Rosalind Davis and Annabel Tilley have created an easy to use guide that draws on the advice and experience of over 30 contributors, including artist and a-n contributor Alistair Gentry, curatorial duo Day+Gluckman, and painter Graham Crowley. While much of the advice and ideas here may not be new in of themselves, what is new and hugely worthwhile is the way they have been brought together in a practical and accessible format. There’s much here that will be helpful for artists starting out, and possibly some useful tips for more established practitioners too.
www.octopusbooks.co.uk

8. Walk Through Walls – A Memoir: Marina Abramovic (Fig Tree)
As the world-renowned performance artist so many seem to love to hate, it’s indisputable that Marina Abramovic has a canny knack of getting up people’s noses. This hefty memoir, ghost written by American journalist and author James Kaplan, isn’t about to change that, but it’s fascinating and often gripping all the same. Abramovic has already laid bare her troubled early years in former Yugoslavia – most notably in 2011’s The Life and Death of Marina Abramovic – but Walk Through Walls digs deep into both her distant and recent past, intimately recounting the traumas and triumphs along the way. And, despite being over 350 pages, the style is pacy rather than laborious, although Abramovic’s niggling ability to irritate remains: you may, for example, want to skip the section about doing the ‘Abramovic Method’ with Lady Gaga…
www.penguin.co.uk 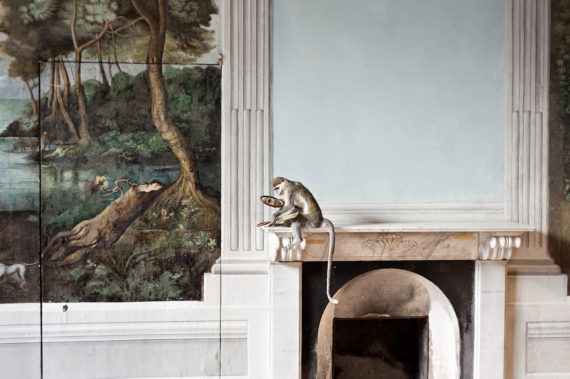 9. The Modern Spirit is Vivisective: Francesca Catastini (AnzenbergerEDITION)
“Knowledge is not made for understanding, it is made for cutting,” reads the Michel Foucault quote that appears in the postscript to Francesca Catastini’s The Modern Spirit is Vivisective. It serves as a useful coda for considering the work. True to its title, this handsome book is an investigation into the process of studying human anatomy, combining the artist’s own photographs with vernacular images of old anatomy lessons, illustrations from Renaissance manuals, complemented with scientific, literary, and philosophical texts. Using chapters as its organising system – ‘On Looking’, ‘On Canon Lust’, ‘On Touching’, ‘On Cutting’, ‘On Discovering’ – the book reveals a great capacity for sequencing images, and the possibility to conceive of them as a form of literature. Selected by 1000 Words magazine editor Tim Clark – read Tim’s full ‘Top Ten photo books of 2016’ here.
www.anzenbergergallery-bookshop.com

10. Art Is the Highest Form of Hope & Other Quotes by Artists (Phaidon)
This thought-provoking book relies on the persuasive power of well-considered words, creating a typographical delight in the process. Featuring an array of insightful quotes from artists – “Learn to say ‘Fuck you’ to the world once in a while.” (Sol LeWitt); “The idea of knowing exactly where you’re going is overrated.” (Sarah Sze); “Art has to be something that makes you scratch your head.” (Ed Ruscha) – it’s a simple and brilliantly executed idea that provides page after page of inspirational hits. Grouped in 42 sections with headers such as ‘Advice’, ‘Failure’ and ‘Drugs+Alcohol’, the quotes range from profound to self-obsessed, but are rarely boring. And how about this from Walker Evans: “Stare. It is the way to educate your eye, and more. Stare, pry, listen, eavesdrop. Die knowing something. You are not here long.”
uk.phaidon.com