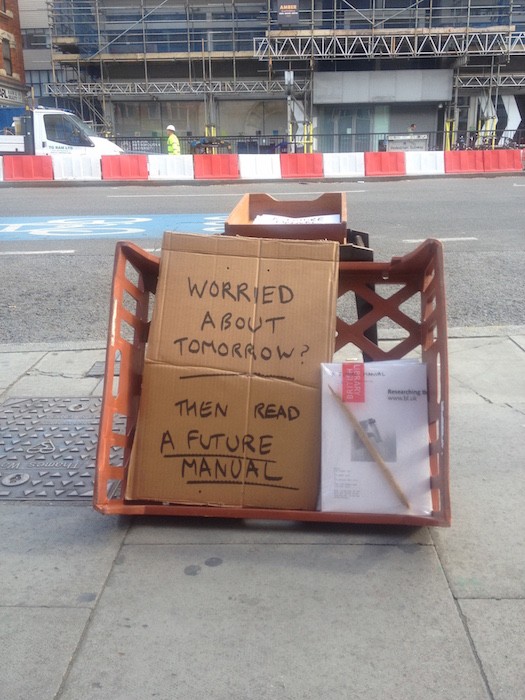 Eight artists have been selected to receive funding from The Artists Fund, a new pilot programme set up by a-n, Artquest and DACS to distribute small awards to UK-based visual artists.

Five artists will receive grants of £1,000 to support their practice, while a further three artists have been awarded commissions worth £2,000.

The Artists Fund is open to visual artists who are over 18 and have been practicing professionally for a minimum of three years, either as graduates or as self-taught artists.

London-based artist Louise Ashcroft is a graduate of the Ruskin School of Art (Oxford University) and Birkbeck (University of London), and also studied Sculpture at The Royal College of Art.

A co-founder of the alternative art school AltMFA, she will create an eclectic body of work, including ‘resources for alternative methods of generating lived experience’ (described as Allan Kaprow meets religious parables, self help books, DIY YouTube videos and Ikea instructions) and new live works for festivals. She will also test a possible project around housework and shopping, and make films with a local football club.

For The Manufacturing of Consumer Goods in Competition with Advanced Industrialised Economies, Robert Fung – a graduate of Fine Art & Visual Culture at Bristol University of the West of England and now based in London – will make replicas of consumer items purchased online.

Translating the cost of making mass-market goods via the UK’s minimum wage into the time spent on their manufacture, School of the Damned member Fung will produce the products until the £1,000 budget has been used up.

Based in Manchester, Naomi Kashiwagi studied BA Fine Art, receiving an Erasmus Scholarship to The Academy of Fine Arts in Venice. She completed an MA Fine Art at Manchester School of Art (MMU), including a month studying at Tokyo University of Art and Music, and later studied MA Art Gallery and Museum Studies at the University of Manchester.

Kashiwagi makes drawings, performances, sound works and installations at the intersections of visual art, music and technology. The grant will allow her to develop the collaborative live performance, Gramophonica, by enabling the purchase of musical hardware, software and materials.

Katja Larsson studied at The Glasgow School of Art and The Slade School of Fine Art and is based in London and Stockholm. She will go to the Isle of Skye to create work from its volcanic rock coastal landscape; an investigation into traditional approaches to landscape via the means of contemporary sculpture.

Alluding to the romanticism of Caspar David Friedrich, Ansel Adams and Thomas Joshua Cooper, she will explore historic and traditionally depicted landscapes through the means and limits of her own body.

Low will use the grant to complete a new body of work based on an extended trip to photograph the animals, enclosures, staff and visitors of 15 British zoos; a mixture of large, established, historically significant zoos, and comparatively modern, less high profile zoos spanning the length and breadth of the country.

Tom Pope completed a BA in Photography in the Arts at Swansea Metropolitan University, and an MA Photography at The Royal College of Art. Based in London, he will use the commission to build and launch the most exclusive private members club in the world: the club will have only one member at any given time, with membership lasting just one day.

The membership fee will be based on the market price of buying one square metre of land at the club’s location, initially the Royal Borough of Kensington and Chelsea (where the cost will be £10,854). Commenting on wealth inequality between London and the rest of the UK, the club will highlight the effects of regeneration and the way arts organisations are being pushed to offer ever more tailored and unique experiences to their benefactors and philanthropists.

Tom James is a writer, self-publisher and artist, based in London. His fanzine, Go, is part of the permanent collection of the V&A. He was recently awarded a commission to create a new, future-themed folly in the grounds of Compton Verney, Warwickshire with the artist Alex Hartley.

His Artists Fund commission, Starting Fires And Catching Rabbits, is a continuation of the ongoing project, A Future Manual, a DIY guide to some of the skills needed in a climate-changed world. James will be taking workshops on tour to extend his audience and earn money and bartered goods as income, his aim being to double the commission budget. The work is a response to the limbo period humanity is in, in which we know climate change is coming but do not coordinate efforts to prevent it.

Working with artist and radical fishmonger Sam Curtis, Morgan will run public workshops across London based on the old Japanese printing technique of Gyotaku (fish rubbing). These will explore making as an ecological process, bringing together printmakers, fishmongers, chefs and zoologists. Commission funds will be doubled by selling tickets for the workshops.

The Artists Fund was established following a successful joint bid to Arts Council England’s Catalyst Arts: building fundraising capacity programme to research the viability of the project. The pilot programme will be closely evaluated to help shape the future of the Fund, and the awardees will be asked to contribute to this.

The Artists Fund: Open for applications – more information on the pilot programme