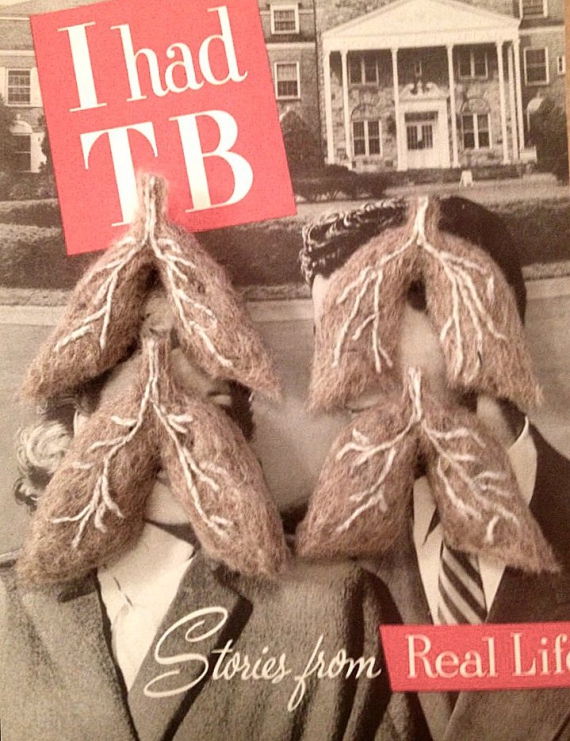 “I don’t like the idea of boundaries between disciplines.” Since 2011, Anna Dumitriu has been artist in residence with the Modernising Medical Microbiology project at the University of Oxford. Shadowing clinical specialists and learning hands-on techniques in a Containment Level 3 Laboratory, she has developed a new body of work that aims to communicate to the general public the impact of current microbiological research.

“Being embedded in scientific settings is the way I’ve worked for a decade or so,” she says. “It means I can get a far deeper understanding and I am treated as part of a team. People are keen to show me the latest things they are working on and chat about them, which leads to all sorts of ideas and conversations.”

These dialogues have led to The Romantic Disease: An Artistic Investigation of Tuberculosis at Watermans Art Centre in West London. Running for ten weeks and culminating in a one-day symposium on World TB Day, Monday 24 March, Dumitriu’s Wellcome Trust-supported exhibition contains altered historical objects alongside textile pieces created with strains of mycobacteria, including Mycobacterium tuberculosis, the causal agent of TB.

Historical leaflets and texts contextualise the installation, telling the story of the so-called ‘romantic disease’ and the ways ideas about its causes and treatments have evolved over the centuries. “It invites the visitor to join me on my curious journey, which is undertaken in both a non-scientific and scientific way,” she says.

Dumitriu’s inquisitive approach finds form in the pieces on display. Where There’s Dust There’s Danger is a series of miniature needle-felted lungs made from wool and household dust, then embedded in the culture medium for tuberculosis and left for a month for the disease to grow. The objects are later sterilised but, the artist explains, remain as relics of the experience of being contaminated.

The Romantic Disease Dress is stained sienna brown with walnut husks, decorated with dyed silks, flowers and bows and impregnated with DNA of dead M. tuberculosis. The work explores historic links between natural dyes and medicine, while also referencing cases of female TB patients being given forced abortions for fear of further spreading what was once considered a hereditary disease.

There is perhaps something incongruous in such safe, traditionally feminine crafts as needle-felting and embroidery being used to explore what the World Health Organisation describes as ‘second only to HIV/AIDS as the greatest killer worldwide due to a single infectious agent’; in delicate, protecting materials as wool and silk being ‘tainted’ with bacteria. That the work relates on an emotional level is important to Dumitriu, and also that her female hand is visible.

“During the Enlightenment, women were seen as part of nature and something to be studied (like the tide) rather than individuals who were able to contribute to science in their own right,” she explains. “One of the most highly respected achievements for a woman was a proficiency in embroidery, encouraged to learn just enough about the natural world to create designs of plants and flowers, but no more. So for me, to perform ‘science’ through that lens, and on my own artistic terms, seems appropriate.”

When presenting her work, Dumitriu draws equally on art and science lexicons as she describes processes of etching, inoculating, stitching and sterilizing: “The practice of microbiology feels very like the practice of making art, I don’t really see a division between the tools I use in either area.” The melding of conceptual and processual links between art and science can be seen in, for example, the perforating gestures of embroidering and injecting, or between patterns of bacterial growth and the patterning of silk thread across a dress. “In terms of how I stitch I am definitely influenced by the behaviour of bacteria,” she agrees.

Here textile art and microbiology come together in a methodology that Dumitriu refers to as trans-disciplinary, based on sharing tools and techniques and questioning ways knowledge is constructed. Engaging the public and making her research accessible to others is also important, and during her exhibition Dumitriu is leading an intensive Open Lab workshop for a group of participants to experiment with live bacteria, dyes, stitch and natural and clinical antibiotics.

Beginning on 15 February, the workshop will evolve over five Saturdays with an in-depth programme of practical and conversational sessions – objects and themes within the show will offer starting points for new bio-art investigations. Open to the general public as well as artists, scientists and researchers, for Dumitriu everyone’s experience will be useful in developing the work. “The subject of the show is important,” she says, “not just to science but to everyone. Because of that it has to be accessible – but people are smart and everyone can contribute.”