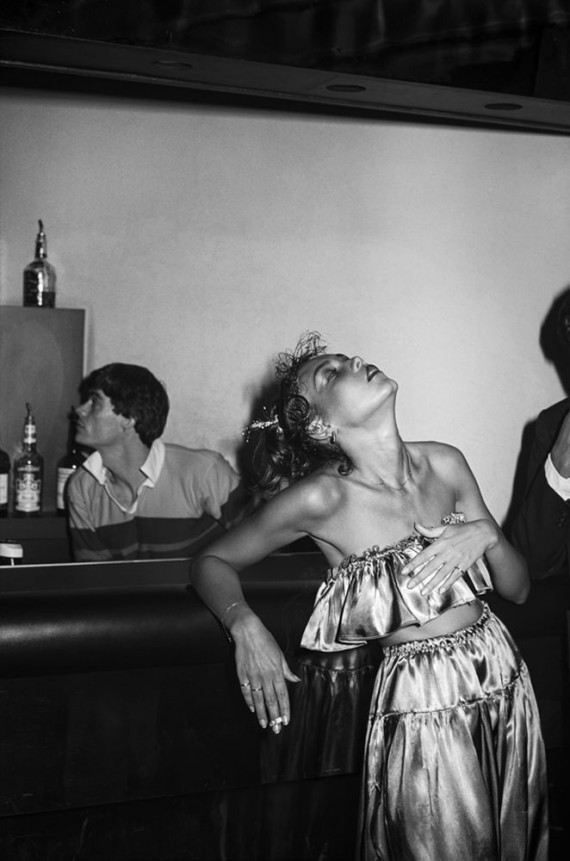 1. Tod Papageorge: Studio 54
Here it is. The golden years of New York’s legendary nightclub captured on black and white film by the great but somewhat under appreciated Tod Papageorge. Taken between 1978 and 1980, it encapsulates the glamour and debauchery that was Studio 54, picturing denizens (above) dancing and drinking the night away. Full of narrative quality but adding up to something more than straight reportage or journalism, the 66 photographs in this book wrench out a visual poem constructed from the action. Often mesmerising in their compositions, Papageorge’s imagery lays bare the grace of his subjects, raising them to a new, mythical level. Kudos to publishers Stanley/Barker for activating his archive.
For more information or to order a copy visit stanleybarker.co.uk

2. Laia Abril: The Epilogue
The Epilogue is at once a testimony and posthumous biography of the life of Cammy Robinson, who died at 26 as a result of bulimia. Interspersed with Abril’s photographs – comprising the subject’s family, friends and local neighbourhood – are letters, diary entries, birth and death certificates, hospital admission reports and numerous other items. Equal parts imagery and text, it offers extreme scrutiny and an avalanche of facts around the uncomfortable aspects of this eating disorder. Sombre and poignant, The Epilogue is not the most marketable of books. It is, however, a masterpiece of photobook storytelling, which combined with sophisticated production values firmly warranted its inclusion in this year’s Paris Photo-Aperture Foundation First Book Awards.
For more information or to order a copy visit dewilewis.com

3. Andrea Botto: 19.06_26.08.1945
This book (pictured above) retraces the journey taken by the photographer’s grandfather, Primo Benedetti, when he was released from a Nazi prisoner-of-war camp and began making his way back home to Tuscany. A reimagined document of sorts, Botto has amassed images from the Internet by entering searches for the names of cities his grandfather passed through and the dates of his travel. Alongside these are reproductions of Benedetti’s passport and letters sent home, deftly interwoven into a personal journal-format book. 19.06_26.08.1945 is an interesting new departure for Botto, yet it seems that it was in the pipeline all the way. It’s also a beautiful way to honour the memory of Benedetti, who died on 27 January 2010, Holocaust Memorial Day.
For more information or to order a copy visit danilomontanari.com

4. Daisuke Yokota: Linger
Linger is a perfect gateway into the work of Daisuke Yokota, the rising star of Japanese photography. Dark, ebullient and expressionistic, his work is largely process-driven; photographs of an erotic encounter between a man and woman are printed, rephotographed, and then the film is developed in an ‘incorrect’ manner before the final prints are made. Wrestling control of this, he produces a dreamy mood piece that teeters on the threshold of visibility. Small design touches such as the heavy paper stock, five hole Japanese stab binding and Kangxi corners all give this book extra impact. Linger is yet another formidable outing from AKINA Books, an independent, London-based publisher going from strength to strength.
For more information or to order a copy visit akinabooks.com

5. Fraenkel Gallery: The Plot Thickens
Published to mark the 35th anniversary of this pioneering San Francisco gallery that has done so much to advance photography, The Plot Thickens thrusts us through three centuries of largely unseen works by name photographers including Eadweard Muybridge, Alec Soth, Charles Clifford and Lee Friedlander. Born of a premise that the single artefact matters less than the links that can be forged between images across different periods, and for often entirely different motivations, the book also gives countless anonymous and unknown images their beautiful dues. At 250 pages, and comprised of 100-plus photographs, The Plot Thickens is a large, learned and insanely luxurious publication that will be sure to make your book shelves groan.
For more information or to order a copy visit fraenkelgallery.com

6. Thomas Mailander: The Night Climbers of Cambridge
It’s been a prolific year for the endlessly fascinating Archive of Modern Conflict. Of their eight releases during 2014, this publication with contemporary artist Thomas Mailander is certainly up there amongst their best. Documenting the tomfoolery of 1930s Cambridge university students who photographed themselves while climbing the city’s rooftops, its bewitching take on the phenomenon of ‘buildering’ captures the magic and recklessness of the pastime in an extraordinarily curious collection of photographs. With a gorgeous black velvet cover and hand-written notes on the backs of various inserted photographs, this is an imaginative extension and rethinking of the 1937 book of the same title, produced by the esteemed publishing house Chatto & Windus. Read more here.
For more information or to order a copy visit amcbooks.com

7. AMC2 No 9: Amore e Piombo, The Photography of Extremes in 1970s Italy
Part catalogue, part photobook, Amore e Piombo offers a fascinating appraisal of the dark and viscous era that was Italy’s ‘Years of Lead’, a period of riots, kidnappings and domestic terrorism from both the extreme left and right. Yet the chaos and bedlam of seismic events such as the Aldo Moro murder or the Piazza Fontana bombing on the Banca Nazionale dell’Agricoltura are juxtaposed against its opposite: the freedom and dazzle of celebrity lifestyle. One image affects another, and another, and in a stroke of editorial brilliance, these 120 or so press photographs culled from the former Team Editorial Services agency lay bare the dual fascinations of the Paparazzi. Read more here.
For more information or to order a copy visit amcbooks.com

8. Penelope Umbrico: Range
Injecting a shot of energy into a selection of canonical photographers’ images of mountains – ‘the oldest subject and most immovable landmark’ – Penelope Umbrico rephotographs them using smartphone camera apps to disorienting effect. An explosion of colour and abstraction born of errors in grain, pixels and screen resolution all play their part to recaliberate our relationship with the analogue history of photography amidst the current digital onslaught. What we get is a fresh study of the authored versus the anonymous, the original and the copy, the fixed and transitory. This is collective pictorial memory skewed for the Internet age.
For more information or to order a copy visit aperture.org

9. Paul Graham: Does Yellow Run Forever?
Known for his brand of straight photography that transcends the banal, British photographer Paul Graham brings us more of the same compelling, existential images of quiet and unexpected beauty. In his well-marshalled narrative, Graham braids images of rainbows shot in Ireland, a set of photographs of his partner sleeping and a series of views of gold pawn shops. Their purpose: to ask, what is that we seek and value in life – love, wealth or beauty? – all the while questioning the notion of how photography represents the world. Does Yellow Run Forever? may not be vintage Paul Graham but with every book he brings out, the more convinced you become of his genius. Read more here.
For more information or to order a copy visit mackbooks.co.uk

10. Nicoló Degiorgis: Hidden Islam
While 2014 hasn’t brought a debut book that has exploded onto the scene with quite the same fetishisation as Lorenzo Vitturi’s A Dalston Anatomy from last year or Cristina de Middel’s The Afronauts from 2012, the immediate impact of this title from Nicoló Degiorgis is undeniable. A deceptively restrained book, Hidden Islam opens the door on the makeshift places Muslims in north east Italy are forced to build and use as places of worship. As its pages open out in gatefolds to reveal both worshippers and the non-descript facades that conceal them, the reader is thus prompted to consider these often invisible lives, or ponder the universe that could be next door. Winner of both The Author Book Award at Les Rencontres d’Arles and Paris Photo-Aperture Foundation First Book Awards, it doesn’t half help to have an introduction written by Martin Parr.
For more information or to order a copy visit rorhof.com

Become a member of a-n – Are you a photographer/artist/arts organiser/art student? a-n has a range of memberships for individuals and groups, from £36 annually (£15 for students). More information here