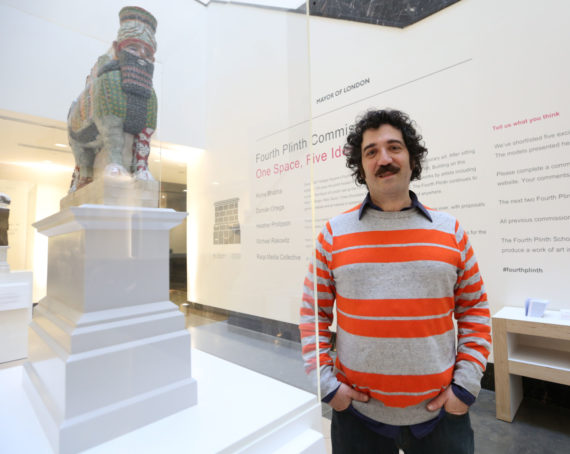 Michael Rakowitz and Heather Phillipson will be the next two artists to undertake the Fourth Plinth commissions in Trafalgar Square, London. Their designs will be unveiled in 2018 and 2020 respectively.

Rakowitz’s proposal is a continuation of his The Invisible Enemy Should Not Exist project. Begun in 2006, it attempts to recreate over 7,000 archaeological artefacts looted from the Iraq Museum during the Iraq war or destroyed in its aftermath, and has now been expanded to include artefacts destroyed by ISIS.

For the Fourth Plinth, Rakowitz will recreate the Lamassu, a winged bull and protective deity that stood at the entrance to Nergal Gate of Nineveh from c 700 BC. It was destroyed in 2015 by ISIS, along with other artefacts in Mosul Museum.

The Lamassu will be made of empty Iraqi date syrup cans, representative of a once-renowned industry decimated by the Iraq wars.

Speaking about his proposal, Rakowitz said: “To have this work displayed on the Fourth Plinth will be especially meaningful.

“It’s the first time this project has been situated in a public space, and it’s happening when we are witnessing a massive migration of people fleeing Iraq and Syria. I see this work as a ghost of the original, and as a placeholder.” 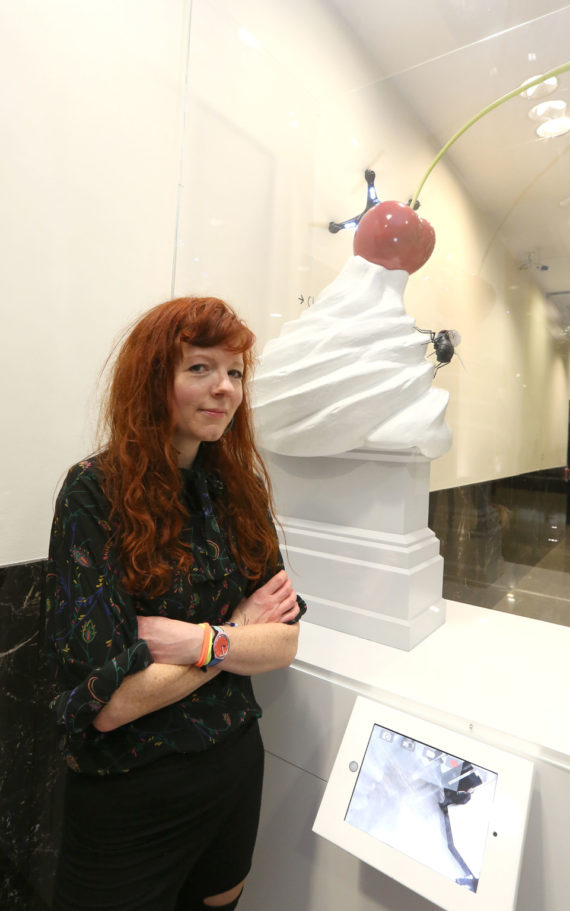 Phillipson’s The End is a whirl of cream topped with a cherry and a fly, with a drone camera flying overhead that will enable onlookers to watch a live feed.

Described by Phillipson as “a monument to hubris and impending collapse”, the work explores the extremes of shared experience, from commemorations and celebrations to mass protests.

Explaining that the work will take into account both the political and physical aspects of Trafalgar Square and the plinth, Phillipson said she was “honoured to have been selected to make work for such a significant public site and to be able to see The End scaled up for its ultimate size and context”.

She added that “the surrounding architecture and its population are participants in a mis-scaled landscape, magnifying the banal, and our cohabitation with other lifeforms, to apocalyptic proportions”.

The two sculptures will be the twelfth and thirteenth works to appear on the Fourth Plinth since the commissioning programme began in 1998. The programme is funded by the Mayor of London with support from Arts Council England.

The latest commissions were chosen from a shortlist which included Huma Bhabha, Damián Ortega and Raqs Media Collective.

Speaking about the selected commissions, Ekow Eshun, chair of the Fourth Plinth Commissioning Group, said: “This year we received five extremely strong proposals for the next Fourth Plinth commissions, and choosing the winning commissions was particularly challenging.

“I wish to congratulate Michael Rakowitz and Heather Phillipson on winning the commission. Their works are wondrous, striking and deeply engaging. The new commissions will proudly continue the legacy of the Fourth Plinth in putting world-class contemporary sculpture at the heart of London.”

The current sculpture, Really Good by David Shrigley, will stay on the plinth until March 2018.