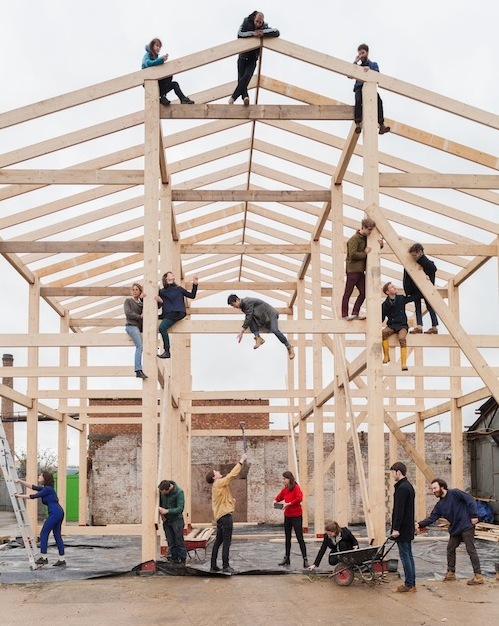 The shortlist for the 2015 Turner Prize has been announced at Tramway, Glasgow. The nominated artists are: Assemble collective, Bonnie Camplin, Janice Kerbel, and Nicole Wermers.

This years’s shortlist is dominated by artists who address social issues in their work. The London-based Assemble collective is an 18-strong group of designers and architects who have been nominated for their work regenerating a rundown Liverpool housing estate, in the Granby Four Streets area of Toxteth.

Artist Bonnie Camplin – who along with the other two nominees is also London-based – is nominated for her project The Military Industrial Complex at South London Gallery. This took the form of a study room in which people were invited to explore issues around ‘consensus reality’.

Janice Kerbel has been selected for her one-off operatic performance piece, DOUG, featuring nine songs for six voices and commissioned by Glasgow’s Common Guild and performed in the city’s Mitchell Library.

Chair of the judges and soon to depart Tate Britain director Penelope Curtis said of this year’s shortlist: “I think the prize has become more serious. It has lost some of the sensational aspects it had earlier, and that’s good. In the early days one of the aims was to increase the quality of discussion about contemporary art and I think it has – it’s not so simplistic any more. These artists are posing questions that are hard for all of us.”

Commenting on the inclusion of an architectural collective on the shortlist, mima director and judge Alistair Hudson said: “In an age when anything can be art, why not have a housing estate?”

The 2015 Turner Prize judges are Hudson; Kyla McDonald, the artistic director of Glasgow Sculpture Studios; Joanna Mytkowska, director of the Muzeum Sztuki Nowoczesnej in Warsaw, Poland; and the critic and curator Jan Verwoert.

The Turner Prize exhibition will this year be hosted by Tramway, Glasgow, the first time the show has been staged in Scotland in its 31-year history. It will open 1 October and run until 17 January 2016.

The Turner Prize is awarded to a British artist under 50 for an outstanding exhibition or other presentation of their work in the preceding year. The winner of this year’s prize will be announced on 7 December 2015.