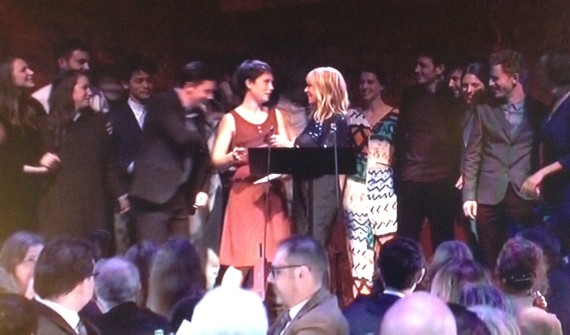 What should we think about an architecture collective winning the UK’s most high-profile and longstanding prize for contemporary art? What does it mean for artists who, unlike the 18 members of Assemble, describe themselves as such? And do the people who say that this is a game changer for the prize and for contemporary art more generally, have a point?

A quick scan of Twitter following last night’s announcement revealed that these questions and a whole lot more are currently swirling around in the minds of artists and people who care about art and what artists do. And put in the simplest terms, underlying all this head scratching and heart searching is the question beloved by tabloid headline writers and the wider public since long before the Turner Prize was launched in 1984: But is it art?

It was for this reason that I used the phrase in the headline for last night’s a-n news piece announcing the winner. Watching Channel 4’s endearingly chaotic live coverage, it was the recurring question, voiced by both Morgan Quaintance of Cubitt gallery and broadcaster Muriel Gray, Glasgow School of Art’s chair of governors. To paraphrase: “I mean, Assemble are great aren’t they, socially-engaged work such as theirs is important and timely and needed. But where’s the art?”

This kind of questioning is nothing new when it comes to the Turner Prize – last year it was ‘Are films that reference Marxism, feature contemporary dancers and explore the commodification of objects really art? (Oh, and isn’t 54-minutes a bit long?)’ Previous years have had ‘Is an unmade bed really art?’ and ‘Where’s the art in a sound installation under a Glasgow bridge?’

For many people who are embedded in the visual arts, all the debate around what is or isn’t art must seem a bit quaint, a bit last century. Art that is participatory and social, artists that trained as architects – none of this is new, none of it is really a surprise.

But that’s what makes the Turner Prize both so vital and so infuriating. It gets people who for the rest of the year barely give such things a second thought, talking about it, thinking about stuff that might otherwise not touch them – for good and for bad.

As former Turner Prize nominee Christine Borland so eloquently wrote when this year’s exhibition opened, the prize can act as a force for homogenisation, squeezing artists and art into boxes – both real and metaphorical – that don’t fit. After over 30 years as a fixture on the UK contemporary art calendar, the prize has its own life and logic; it is both part of and separate to what happens in the visual arts in this country. It is a piece in the Tate jigsaw. In Turner Prize land, no artist – or architecture collective for that matter – is more important than the prize itself.

Of course last year’s other Turner Prize story was that it was all over, that interest had waned, that it was a spent force. It was Artes Mundi, with its international remit and focus on artists engaging with the big wide world outside the studio, that was showing the way. Awarding the prize to Assemble for their Granby Four Streets project, and the collective’s subsequent ‘exhibition as showroom’ for their Granby Workshop social enterprise, has dramatically reoriented the prize at a time when, perhaps more than ever, artists are defining their role in social and political terms.

But the question, ‘Is it art?’ won’t – and really shouldn’t – go away. Seeing people who live and breath contemporary art grappling with the idea of Assemble’s win, reading that architects/designers winning a contemporary art prize undermines the very nature of art education – aren’t these small shocks to the system what make this an interesting place to be?

Turner Prize 2015: favourites Assemble win, but is it art?