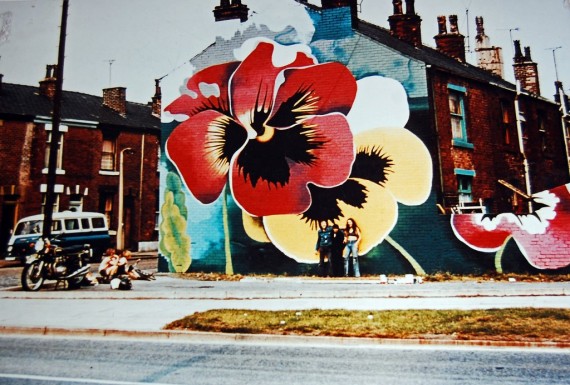 “The working-class suburbs of Rochdale were the last place you’d expect to see so much colour and evidence of imagination. It was very inspiring. It made me think anything was possible.”

Writer, journalist and musician Mark Hodkinson grew up in 1970s Rochdale and remembers seeing Walter Kershaw’s vibrant graffiti emblazoned on the sides of condemned buildings in the town. This year, the BBC commissioned Hodkinson to make a half-hour documentary on Kershaw, which airs 13 September on Radio 4.

This was a chance for Hodkinson to meet Kershaw (now in his seventies), to revisit some of their old haunts and to celebrate the talent and spirit of Britain’s original guerilla artist: “When I popped round to see him I realised he’d make perfect radio,” Hodkinson says. “He’s so passionate and warm and eccentric.”

Kershaw’s murals appeared on bridges, public toilets and old shops, upsetting local councillors but charming Rochdale residents. He worked completely independently, “almost on impulse”, without a political agenda and outside any established art community: “Walter’s work isn’t political in the conventional sense. He doesn’t think that way, although I suppose it’s a political statement in itself to paint huge murals without permission.”

Hodkinson spoke to other Rochdale locals while researching the documentary ­– they had nothing but praise for Kershaw’s now legendary work: “It was brilliant getting such rum northern voices into the programme because they’re rarely heard on the BBC. They all spoke evocatively of what the art meant to them and how it brightened up their lives, which was Walter’s main aim.”

Kershaw has since been formally commissioned to make various public murals – at Trafford Park for example. But it is the early works of street art that most appeal to Hodkinson and that live on most vividly in people’s minds – bold, spontaneous paintings made in the most unexpected places, that literally stopped people in their tracks.

Playing up: Gillian Nicol selects key texts from a-n’s archive that explore the collaborative and creative processes involved in making artwork in the public realm; as well as issues and concerns around our collective experience of public space. Read on