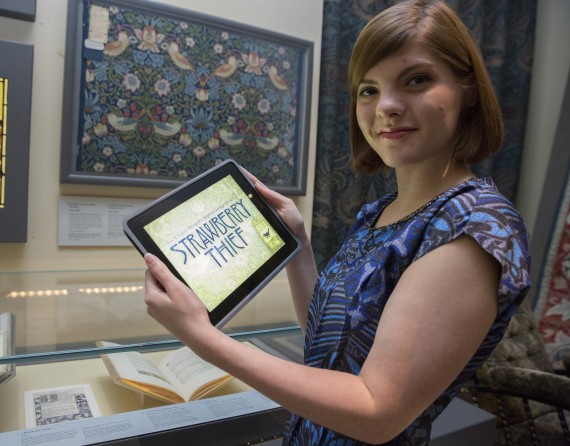 The Scottish game designer Sophia George has developed a new game for the iPad inspired by the work of William Morris. Strawberry Thief takes its cue from a Morris-designed fabric exhibited in the V&A’s Britain 1500-1900 galleries, and stems from George’s time as the V&A’s first ever game designer in residence, a collaboration between the museum, Abertay University, Dundee and the Association for UK Interactive Entertainment.

Allowing users to sketch and colour the famous pattern by flying a bird – the strawberry thief itself – across their iPad screen, the game is accompanied by animations and music from the Royal Scottish National Orchestra. It gradually brings Morris’s pattern to life in an experience designed for players of all ages.

“I’m delighted to be releasing my second game, Strawberry Thief, after a wonderful year working in the V&A and at Abertay University,” said George, who won a BAFTA Ones to Watch Award in 2012 for her first game, Tick Tock Toys.

“With Strawberry Thief I wanted to show that games are an incredibly artistic, creative medium that can excite, inspire and even relax the player, quite unlike the stereotype of games just involving fast-paced violence.

“It’s also very important to me that families play games together, that games are designed for older people to engage with technology, and that girls and young women see game art, design and programming as real career options for them.”

George’s next project involves working with primary school pupils in Dundee and will include more inspiration from her V&A research, including the works of Margaret Macdonald, the wife of Charles Rennie Mackintosh, and her sister Frances.

Professor Louis Natanson, head of the School of Arts, Media and Computer Games at Abertay University, added: “Sophia is a very inspiring young designer, and Strawberry Thief gives us a glimpse of the potential for games to explore new ways of interpreting and exhibiting the work of famous artists.”

Strawberry Thief is available free from the App Store