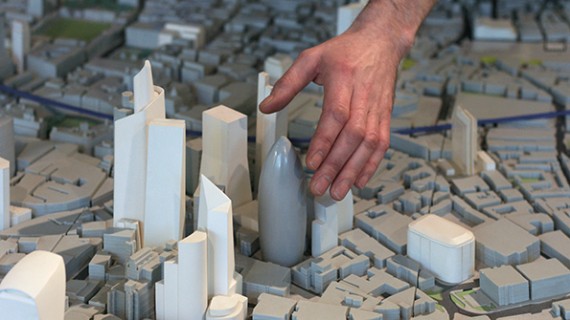 Pavilion of the Republic of Armenia: Armenity/Hayoutioun, The Island of San Lazzaro degli Armeni
A hundred years after the Armenian Genocide, the Armenian Pavilion is dedicated to the consequent diaspora, inviting grandchildren of its survivors to exhibit on the Island of the Armenians – historically the location where from the 18th  century onwards, Armenian religious orders and language were studied. Curated by Adelina Cüberyan von Fürstenberg, former director of Magasin art centre in Grenoble and human rights NGO-founder, the artists have been drawn from across the globe, each representing the Francophone-derived concept of Armenity.

British Pavilion: Sarah Lucas, Giardini
The British Council notoriously keep details of the national pavilion exhibition a guarded secret. This year, with Sarah Lucas chosen as the 20th artist to receive this biennial commission, we can guess that there may be large-scale semi-figurative forms hinting at, if not directly resembling, genitalia. Lucas keeps us on our toes with her formal and material decisions; her first bronze pieces were in fact created for her 2013 garden installation in Massimiliano Gioni’s curated group show at the 2013 Venice Biennale.

Pavilion of Chile: Poéticas de la Disidencia / Poetics of Dissent, Arsenale
Curated by cultural theorist Nelly Richard, this year’s pavilion shows the work of two artists and activists. With a background in creating interventions in public spaces, Lotty Rosenfeld’s video installations are re-questionings of history and marginalised peoples. Paz Errázuriz’s poignant black and white photographic portraits portray couples who met whilst inside a psychiatric hospital. Thoughtfully but forcibly entering into this taboo area, they are eternally hopeful in their representation of these often unacknowledged realities.

Dutch Pavilion: to be all ways to be, Giardini and Lazzaretto Vecchio
Herman de Vries, the noted horticulturist and natural scientist-cum-artist, has set up a sanctuarium on the uninhabited Venetian island, Lazzaretto Vecchio. Boat trips can be booked at the Dutch Pavilion, where a display of works on paper, photographs and natural objects collected by De Vries can be viewed alongside his research diary, From the Laguna of Venice – a journal. De Vries’ considered exploration of the natural world brings a contemplative, philosophical calm to the tumultuous experience of the Biennale.

National Pavilion of Iceland: THE MOSQUE: The First Mosque in the Historic City of Venice, Santa Maria della Misericordia, Campo de l’Abazia, Cannaregio
Swiss artist Christoph Büchel is repurposing Venice’s Santa Maria della Misericorida church into a mosque – albeit a non-functioning one – for the duration of the 56th Venice Biennale. Büchel thrives on instituting the unexpected, be it turning a commercial gallery into a community centre or exhibiting the belongings of homeless people at Frieze. Here, he is collaborating with Muslim communities from Venice and Iceland to create a public programme of educational and cultural activities.

Pavilion of Ireland: Adventure: Capital, Artiglierie of the Arsenale
Sean Lynch (work pictured above) draws on myths and rumour to weave together a narrative journey that considers the flow of capital. This installation makes use of video, sculpture and archives to unpick notions of value. With hints of quarries and stone carving, there is likely to be a connection between Lynch’s recent solo exhibition at Modern Art Oxford, for which the artist researched the work of the O’Shea brothers and their Venice-inspired carvings.

New Zealand Pavilion: Secret Power, Biblioteca Nazionale Marciana and Marco Polo Airport
Taking its title from the 1996 book by Nicky Hager that investigated and revealed New Zealand’s international intelligence contribution, artist Simon Denny explores the role of data, knowledge and technological power at two contrasting exhibition sites. New arrivals to Venice are greeted by his work at the arrivals lounge of Marco Polo Airport. For those not passing through the airport, Denny draws another connection to Marco Polo in an installation within the Monumental Rooms of the Biblioteca Nazionale Marciana, that hold many of the first European maps used by early maritime explorers.

The Philippine Pavilion: Tie A String Around The World, European Cultural Centre, Palazzo Mora
Patrick D Flores curates the second official Philippine national participation in the Venice Biennale, returning after a hiatus of 51 years. The exhibition spans this gap, bringing together three generations of practitioners. Taking Manuel Conde and Carlos Francisco’s 1950s feature Genghis Khan as a starting point and curatorial reference, the exhibition also introduces work from Jose Tence Ruiz and Manny Montelibano, who both explore socioeconomic issues of sea nations, global politics and the volatility of borders through installation and film respectively.

Pavilion of Ukraine: Hope!, Riva dei Sette Martiri
Set in a ‘temporal glass construction’ situated between the Arsenale and the Giardini, this year’s pavilion brings together the personal voices of young Ukrainian artists regarding the uncertain future of their homeland. Intended to symbolise a future of transparency, the venue acts as a crucible for these emerging ideas and responses and is organised by the PinchukArtCentre, with support from the Viktor Pinchuk Foundation.

US Pavilion: They Come to US without a Word, Giardini
A new immersive environment from iconic performance artist Joan Jonas will envelop the five spaces of the US Pavilion. This new multimedia installation incorporates ‘video, drawings, objects and sound’ and takes its inspiration from a number of literary works. In July, Jonas will stage three performances with her sound collaborator, Jason Moran, at the Teatro Piccolo Arsenale. They Come to Us without a Word II will include reedited footage from the US Pavilion installation.